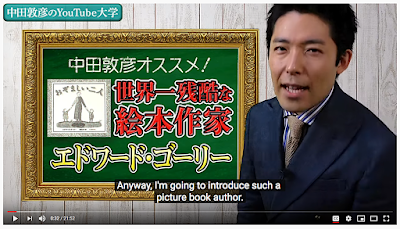 Edward Gorey is very popular in Japan. In 2018 and 2019, the Elegant Enigmas exhibition of original artwork and books traveled to ten different museum venues  and had more than 100,000 visitors. Many of Mr. Gorey's books have been translated into Japanese. Here is an enjoyable video with a very enthusiastic presenter introducing Gorey's works on his YouTube channel. The link to the video:  ﻿https://youtu.be/lifRVAzSXMA 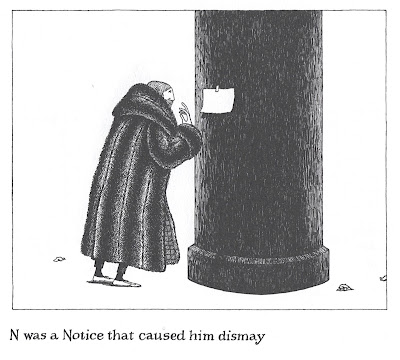 Posted by ampootozote at 6:09 AM No comments: 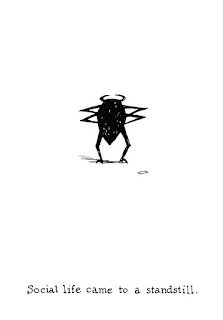 Posted by ampootozote at 6:37 PM 2 comments: 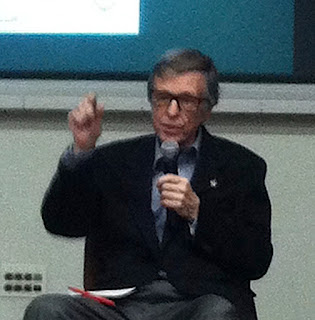 Here is the New York Times obituary for Andreas Brown, owner of the now defunct Gotham Book Mart and promoter of the works of Edward Gorey.

The above photo of Andy is from a gallery lecture on Gorey's works at Loyola University in 2014.


Posted by ampootozote at 2:41 PM No comments: 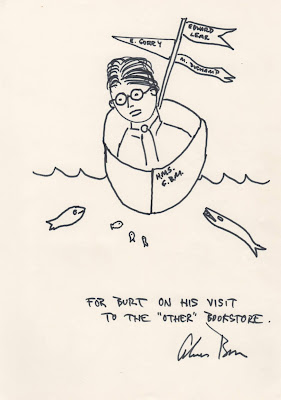 Andreas Brown, longtime owner of the Gotham Book Mart (GBM) in New York City, has passed away. Mr. Brown took over ownership of the GBM in 1967 and ran the store until its closing in 2007. In the 1960's Mr. Brown embraced the works of Edward Gorey, building and promoting Mr. Gorey's career over the decades. Mr. Brown eventually promoted the works of Edward Gorey to the extent that GBM became ground zero for all things Gorey and Andreas Brown became the leading authority on his works. Until recent health issues led to his retirement, Mr. Brown was co-trustee of The Edward Gorey Charitable Trust.

The above self portrait shows Andreas Brown in a boat christened the H.M.S.  G.B.M.  The drawing is a playful reference to  GBM's motto "Wise Men Fish Here".

The Angel, The Automobilist, and Eighteen Others 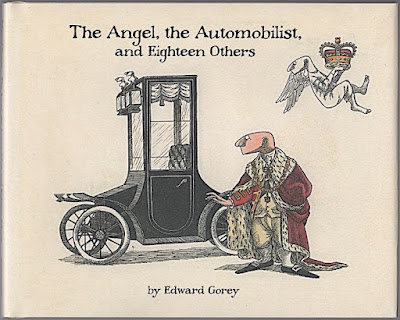 The most recent publication by Edward Gorey is also one of his earliest creations. Published almost 70 years after it was created (and 20 years after the death of Mr. Gorey), The Angel, The Automobilist, and Eighteen Others (published by Pomegranate Communications, Inc. 2020) is a beautifully presented hardcover book that will delight fans of Mr. Gorey. This book is available from Pomegranate Publications (https://www.pomegranate.com/a294.html) and can also be ordered from Amazon.

Discovered in Edward Gorey's archives after his death in 2000, The Angel, The Automobilist, and Eighteen Others was created in the very early 1950's but was never published. The volume consists of twenty drawings of a man engaging in various activities and situations. While the drawings are titled, the book lacks a traditional text or story line, which may be why it was shelved. Mr. Gorey did not yet have a reputation and presenting a small collection of drawings to a publisher would most likely have been a hard sell from an unknown author/illustrator.

The man pictured throughout the book is a doppelganger for Mr. Earbrass, the main character from Edward Gorey's first published work, The Unstrung Harp (1953). Each drawing has a hand written title indicating that the man pictured is actually separate gentlemen: The Artist, The Automobilist, The Balloonist, etc. Another way to view the drawings is that each man is actually Mr. Earbrass himself, indulging in various activities and gathering experiences so he can write his great novel, The Unstrung Harp. 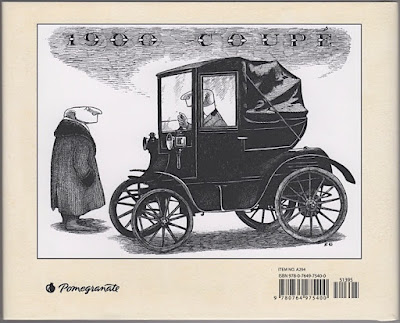 Two drawings of particular interest are The Bather and 1900 Coupe (the back cover of the book). In these two drawings, we can see themes that will be employed by Edward Gorey in almost every subsequent book he published. 1900 Coupe is the final illustration of the suite and appears as the back cover. In the lower right hand corner of the drawing, we see an E.G. monogram signature. On the final drawing of every book, Edward Gorey signed his initial signature denoting the end of the tale (sometimes it was difficult to tell if the story had ended). 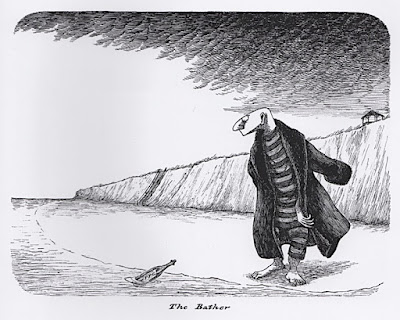 In the drawing titled The Bather, we find our gentleman in old fashioned swimwear and a fur coat on the beach. Washing up at his feet is a bottle with a calling card inside. Calling cards would appear in one drawing within almost every work by Edward Gorey. In every other book, the calling card is blank. Written on this card is p.p.c. - pour prendre conge, meaning to take leave, or to take vacation. In Victorian times, a calling card (or visiting card) of this sort would be left with friends before embarking on a long voyage or journey. Presumably, the voyage of the owner of the card did not end as expected.


Posted by ampootozote at 2:33 PM No comments:

Auction News - A Farewell to The Gotham Book Mart 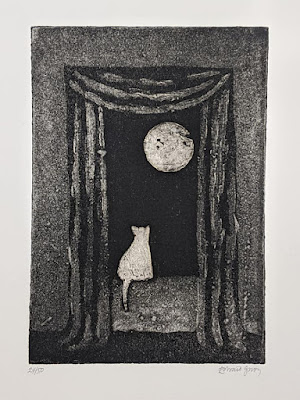 On Tuesday February 25th Doyle Auction House in New York City sold the contents of Gotham Book Mart's storage locker. This treasure trove of Edward Gorey items was basically what was left of GBM's "back room rarities" that included books, prints, posters, and ephemera, almost all of which were signed by Mr. Gorey. The auction consisted of over 200 lots of choice Gorey material.

This was an online only auction that was not widely advertised. There was a preview to view the items being offered at Doyle but bidding was only available through their website. Because of this, and the difficulties and restrictions of signing in as a first time bidder, those who did sign up and bid successfully were able to turn back time and buy virtually every item at 1990's Gotham Book Mart prices. 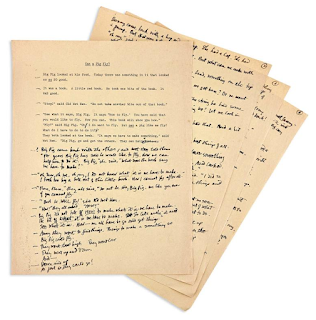 One item of particular interest was an undated four page manuscript entitled Can A Pig Fly. This undated story begins briefly as a typed manuscript and Edward Gorey quickly changes to handwriting the rest of the story in his distinctive script over four pages. The manuscript was accompanied by 30 photocopies that made up a rough draft of the proposed book that included sketches for illustrations (not by Mr. Gorey).

Posted by ampootozote at 6:49 AM 2 comments: