The following article appeared in the New York Review of Books on August 4, 2012: http://www.nybooks.com/blogs/nyrblog/2012/aug/04/collecting-edward-gorey This well written article tells about the Edward Gorey exhibition at Columbia University in New York City. The only strange thing about this article is that it was so late. The show closed less than a week after the article appeared.
Posted by ampootozote at 9:11 PM No comments: 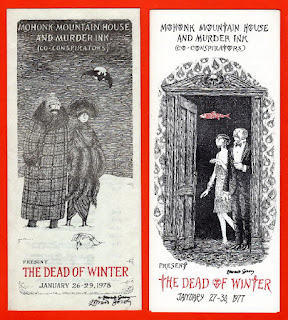 Annual Murder Mystery Weekends at the Mohonk Mountain House resort began in 1977 and continue today. Located in the Caskill Mountains near New York City, guests arrive at the hotel where actors, some posing as guests, provide an interactive weekend in which a murder takes place and everyone is encouraged to help solve the mystery. The final solution is provided, along with brunch, on Sunday morning. Also present at these weekends are mystery authors who provide talks about their work. 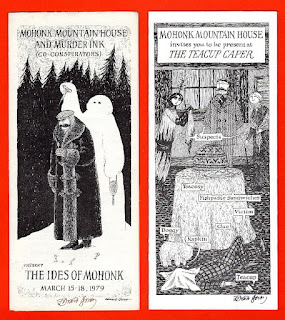 Edward Gorey was commissioned to provide a brochure illustration for the very first of these weekends, and continued to do so for many years. Mr. Gorey created classic images for each brochure, my favorite being the killer posing as a snowman from 1979. I am not sure how many brochures he illustrated, but I know my set is incomplete. I have six brochures and each is hand signed by Mr. Gorey. The first two brochures are printed in two colors, the others in black and white. 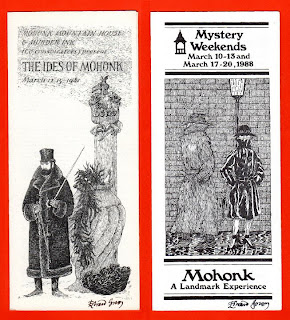 A theme is picked for each mystery weekend, and after the first two January outings, the event seems to have moved permanently to March.
Posted by ampootozote at 7:54 AM No comments:

During his long career, Edward Gorey created covers and spot illustrations for many periodicals, some popular and some obscure. Mr. Gorey was often hired by TV Guide to provide spot illustrations for the weekly magazine, which was appropriate since he was an inveterate television viewer. I do find it odd that a magazine such a this would commission work by Mr. Gorey, but that is why he had an agent! 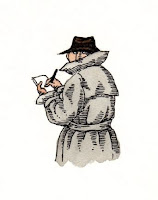 Between 1974 and 1993, Mr. Gorey's work appeared in TV Guide over 20 times.  Due to the small format of the magazine, Edward Gorey's TV Guide pieces were drawn larger than the finished printed size, and were almost always created in color. I have two TV Guide spot illustrations in my collection, both of which appeared in the March 19 - 25, 1988 issue.

The first pen, ink & watercolor image is a delightful, tiny drawing of a detective making notes for the Insider section. This small drawing is only 1.5" x 1" and is flawlessly executed.

The second piece is 3" x 5" and was used on the last page of the magazine for the Review section. It is a self portrait of Mr. Gorey sitting in front of an abnormally large television set, dressed in the style of comfortable clothing he often wore around the Cape - shorts, baggy knit sweater, hat and scarf. Notepad in hand, and with provisions nearby for a long viewing session, the most entertaining and inexplicable part of the drawing is the large green alligator who is present. 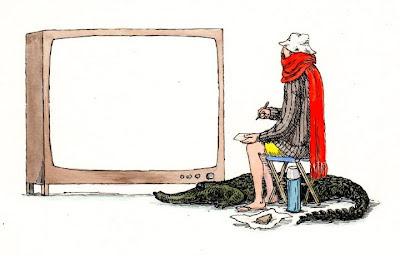 In the magazine, the illustration was used for a review of Dolly, a musical variety show featuring Dolly Parton which lasted 22 installments. This was Ms. Parton's second attempt at a weekly TV show. A photographic image of Dolly along side Kermit the Frog appears on the television screen. The drawing is positioned at the top of the page, is poorly printed and cut off (at least in my copy).
Posted by ampootozote at 7:03 AM No comments: