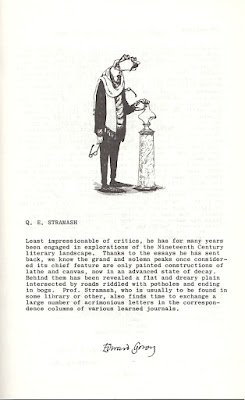 The Wormwood Review was a literary magazine published from Fall 1959 through April 1999. According to The Wormwood Review: A Brief History ( http://www.wormwoodreview.com/history.html ), the magazine was originally published in Mt. Hope, Connecticut, later moving to California.  The first issue was printed by three friends who used an antique letterpress located in a drafty barn on Wormwood hill. The motor of the press was not operational, consequently the press was operated manually, requiring a good deal of physical effort and precise timing. To brace themselves for the task, copious amounts of gin were consumed with the result that the type was crooked in many copies. The experience proved to be one that the publishers were not interested in repeating and subsequent issues were professionally printed. 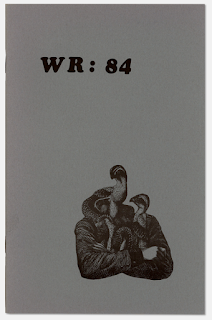 Edward Gorey's one contribution to the Wormwood Review appears in Issue 84 (Volume 21, No.4), page 101, 700 copies, published in 1981. Mr. Gorey appears to have culled from one of his files of unused artwork, choosing an image from the early 1950's. The "Earbrass" style figure is identified at one Professor Q.E. Stramash, and obscure literary critic of appropriate eccentricity for a small literary publication. My favorite part of the illustration is the multiple pairs of eyeglasses scattered about Prof. Stramash's person.


Posted by ampootozote at 9:30 AM No comments: 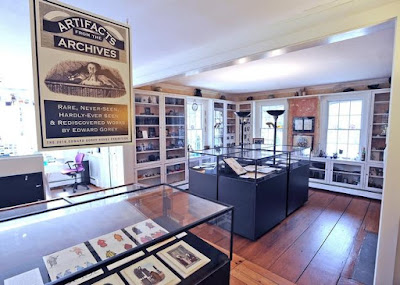 Here is a nice article on wickedlocal.com about the 2016 Edward Gorey House show: http://capecod.wickedlocal.com/article/20160415/NEWS/160418397   Photo of the exhibition is by David Colantuono.
Posted by ampootozote at 1:05 PM No comments: 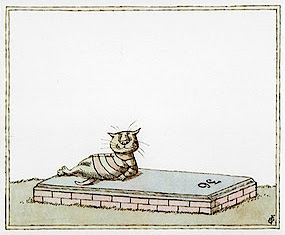 On April 15, 2000, Edward Gorey passed away, leaving behind a body of work that continues to amuse, amaze and inspire. In celebration of his life and works, The Edward Gorey House opens its 2016 exhibition today.


Posted by ampootozote at 6:50 AM No comments:

On April 15th, the Edward Gorey House in Yarmouth Port, MA opens its 2016 exhibition; Artifacts from the Archives, Rare, Never-seen, Hardly-Ever Seen & Rediscovered Works by Edward Gorey. The length of the show's title merely hints at the previously unseen treasures that will be on display through December 31, 2016. 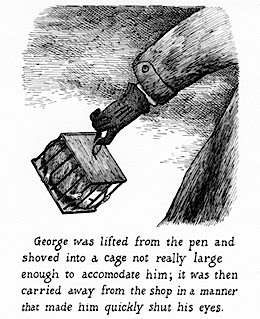 This exhibition marks the 15th anniversary of the founding of the museum in the home that Edward Gorey lived in from 1979 until his death in April 2000. A year after his passing, the home was opened as The Edward Gorey House and features an annual themed exhibition of his works.

Every year, the museum showcases rare and unusual pieces by the prolific Mr. Gorey, leaving one to marvel at the quantity of material he found time to create. The 2016 exhibition promises to be an "Alladin's Cave of Wonders" for the novice and seasoned admirer alike. 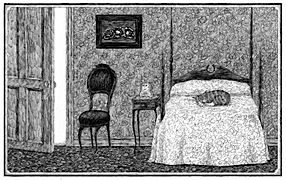 In addition to an extensive collection of drawings and paintings on display, there will be three dimensional objects, and several unpublished or unfinished books.  Also on display will be a large stash of art created by Edward (Ted to his friends and family) as a child and teenager that was preserved by his mother and later by himself. The inclusion of this material will give a full spectrum view of Mr. Gorey as an artist.

This exhibition promises to be a must see show for every Gorey enthusiast. For hours and other information on the show, go HERE. 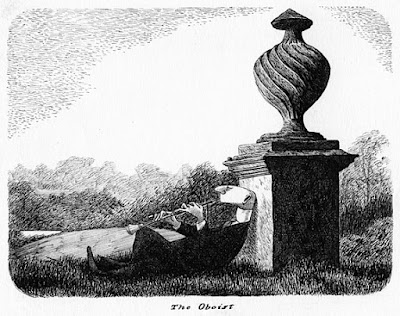 Posted by ampootozote at 8:06 PM No comments: