On my posting from January 28, 2012, I featured a set of Edward Gorey designed "double old fashioned" glasses sold in the gift shop of The Metropolitan Opera. The Met also produced a second set of glasses with different Gorey images. This set shows the four principal classifications of singers - Soprano, Contralto, Tenor and Bass, performing in fantastically designed costumes. These images were also available on tee-shirts from the Met store.

I do not own this set of glasses, but a fellow collector has kindly photographed their set for use here.
Posted by ampootozote at 7:28 AM No comments:

Edward Gorey in the Funny Papers

Edward Gorey turned up in the comics on April 21, 2012, in Frazz by Jef Mallett. I completely agree with the statement!

Posted by ampootozote at 7:20 AM No comments:

As time goes on, Edward Gorey continues to grow in popularity and respect. The past few years have had a large number of exhibitions dedicated to his work, and The Edward Gorey House has had record numbers of visitors coming to the museum. It has been announced that Edward Gorey is being inducted into the Society of Illustrators Hall of Fame on June 22, 2012 at the Society in New York City. The award will be accepted by Andreas Brown.

The Society created the Hall of Fame in 1958 with the induction of Norman Rockwell. A veritable who's who from the world illustration has been inducted over the years, and awards are bestowed upon living and deceased stars in the field. This year, illustrators R.O. Blechman, John Collier and Nancy Stall will be honored along with posthumous awards going to Ludwig Bemelmans, John Sloan, and Edward Gorey. For more information on the Society and to view the list of past honorees, visit http://www.societyillustrators.org
Posted by ampootozote at 7:04 AM No comments:

Sing Tirraloo, Sing Tirralay! New books by Gorey are on their way!

Fans and fanatics, brace yourselves...There will be two new books by Edward Gorey published this fall! You can place your pre-orders with Amazon for these hardback books. Story descriptions are from Amazon.com. 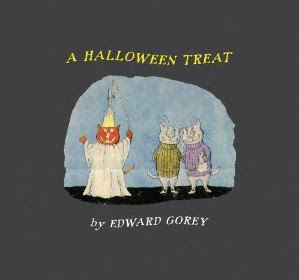 A Halloween Treat - In A Halloween Treat, kids and cats go trick or treating, and gather loot that might be tricks--or perhaps the best treat imaginable: their very own monsters. A short vignette, published in book form for the very first time, it will be an undiscovered delight for Gorey fanatics. Turn the book over to its back cover to read from the other direction, and you'll delve into a collection of Gorey's ghosts, curated from his extensive oeuvre. Charmingly spooky, these ghastly phantasms come in all shapes and sizes--the perfect thing to curl up with on a chilling Halloween night. Publication date: September 4, 2012! 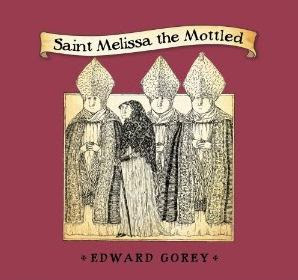 Saint Melissa The Mottled - Saint Melissa was canonized not for her performance of healing miracles and martyrdom, but despite (or because of?) her Miracles of Destruction—rough-and-tumble hijinks and dabbles in the supernatural. Instead of the skills proper young ladies studied, Saint Melissa was adept at the bringing on of migraines, the refinement of lust, and the involutions of penmanship and calligrams. And as Gorey wrote, "letters she wrote are still to be delivered, traps she set are still to be sprung, pronouncements she devised are still to be promulgated, objects she hid are still to be found." Publication date: October 30, 2012!
Posted by ampootozote at 9:08 PM 3 comments: 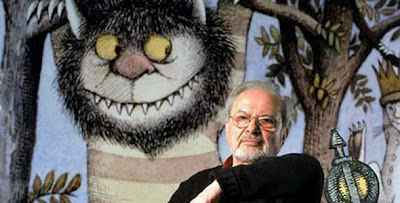 Another great artist who shaped my imagination and life is gone. Goodbye, Maurice Sendak. Bill and I had the pleasure of meeting Mr. Sendak once many years ago. Somewhere in the Milwaukee Public Library system, there may still be a copy of Where the Wild Things Are with my name written inside it about twenty five times because I kept taking it out when the book mobile would come around.
Posted by ampootozote at 6:54 AM No comments: 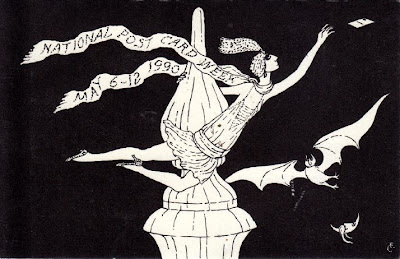 National Post Card Week began in 1984 with the idea that the International Federation of Postcard Dealers and different clubs would create and send cards to celebrate the postcard and promote postcard collecting as a hobby.

From 1984 to 1996, Edward Gorey created a series of postcards celebrating NPW for Gotham Book Mart. The cards announced an annual exhibition of postcards at the gallery and invited recipients to a cocktail party to mark the opening. 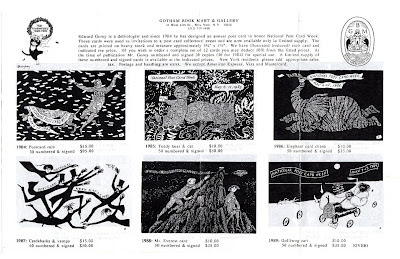 The thirteen cards created by Mr. Gorey featured highly detailed artwork which was sometimes printed in black and white, while others were printed in blue and black. Each year, the cards were sold individually by Gotham. They were also available in signed/numbered limited editions. The 1984 card was limited to 30 signed pieces, while the remaining years were limited to 50. I do not have an image for card #13, which shows a seance, but will post am image when I get one. 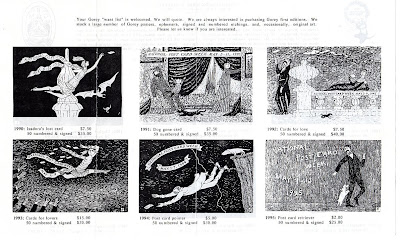 Many of these images are familiar today because they have been issued as note cards and post cards with the wording and dates removed.

The most unusual image created for this series is the 1989 Golliwogg Cart card. Edward Gorey was a lover of stuffed toys and bears, and the Golliwogg featured on this card is no doubt inspired by toy versions of this intriguing character. Still, it was an unusual choice by Mr. Gorey for an image. 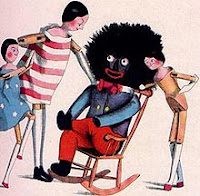 Making his first appearance in an 1895 British children's book entitled  The Adventures of Two Dutch Dolls and a Golliwogg by Florence Kate Upton, the Golliwogg was initially described as a malevolent gnome. In subsequent stories, he quickly became a friendly figure, similar to Raggady Andy. Ms. Upton did not trademark her character, and soon "Golliwog" or "Golli" became the name for any doll or toy with a similar ethnic look. British makers of sweets and marmalade were still using Gollys on packaging well into the 1980's, after which time it was considered an inappropriate and derogatory image. 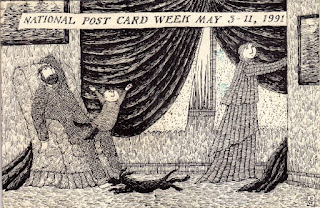 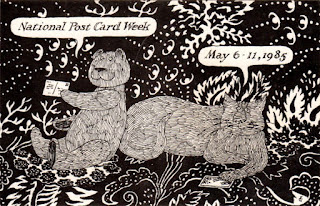 Posted by ampootozote at 9:38 PM 4 comments: