I see them everywhere!
Posted by ampootozote at 9:11 PM 2 comments: 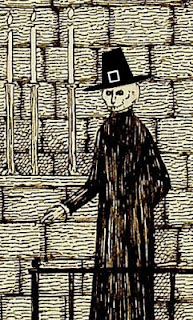 Happy Thanksgiving from Goreyana! I hope all your turkeys have some meat on their bones!
Posted by ampootozote at 6:02 AM 2 comments:

Good things come to those who wait...

On December 5, 2008 and January 9, 2009, I posted images of two pieces of original Edward Gorey artwork in my collection that were published in Friends Magazine. At the time, I mentioned that I was not sure which specific issues of the magazine these images appeared in. Recently, another collector of the works of Mr. Gorey provided me with scans and dates of the magazines in which the art appears. 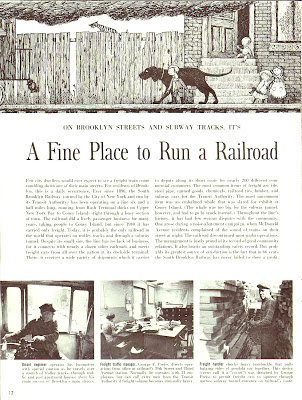 According to their records, Edward Gorey produced images for twelve different issues of Friends Magazine between 1961 and 1965, but there may be more yet to find. The first of the two pieces of art I have is titled Departing Train(see image above) and was published in the July 1962 issue of the magazine. This remains one of my top five favorite pieces of original art by Mr. Gorey in my collection. 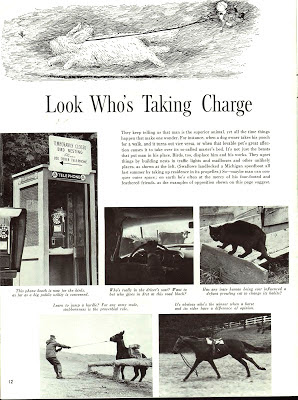 The second piece of Friends art, Boy With Dog Chasing Butterfly, was published in the January 1963 issue of the magazine. This wonderful image illustrates an amusing article about animals who do not let their human companions tell them what to do. The difference between the humans in the photos and the boy in the drawing is that the boy appears to be enjoying his situation thoroughly!
Posted by ampootozote at 6:16 PM 5 comments: 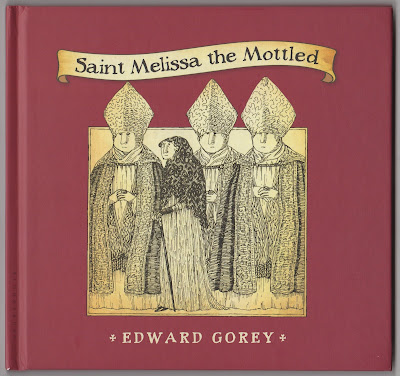 Saint Melissa the Mottled, a new book by Edward Gorey has just come out! Published by Bloomsbury USA, SMtM is available as an illustrated hardcover volume (no dust jacket). 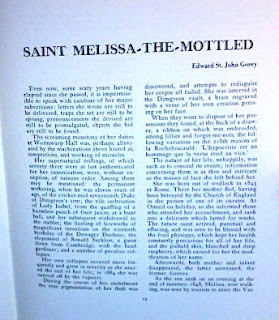 Saint Melissa the Mottled was originally published in 1949 at Radcliffe College in a publication entitled Signature (scans of the original printing were provided by another collector). Radcliffe College, a woman's liberal arts college in Cambridge, MA founded in 1879, officially became part of Harvard University during World War II. After serving in the Army during World War II, Edward Gorey attended Harvard University from 1946 - 50.

Mr. Gorey's first published illustrations adorn the cover of the Harvard Advocate in 1950 and he published his first book, The Unstrung Harp, in 1953. It is of interest to note that SMtM may actually be Mr. Gorey's first published story, and may be his only story published as Edward St. John Gorey. This piece of writing predates his first book by three years and gives us an example of his earliest writing. One would need to have access to the Harvard/Radcliffe publication archives to find out if any other published writing by Mr. Gorey predates this story. 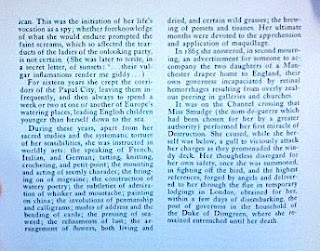 Compared to Mr. Gorey's later works, SMtM is text heavy in the same way that The Unstrung Harp is, which is unsurprising since this piece was a short story without illustrations. Both works share a love of language and humor that will become Mr. Gorey's trademark writing style. That SMtM is a less polished text than TUH is evident in the difficult to read final meandering sentence of the book, which awkwardly ties up the loose ends of the story.

The Edward Gorey Charitable Trust, the publishers, and book designer John Candell have done a fantastic job making this volume look like a "Gorey book". Since the story was written by Mr. Gorey but never illustrated, they have chosen "appropriate images from the hand of the author" to accompany the text. The artwork is black and white and comes from a variety of well known and obscure sources. The printing quality of the illustrations varies from piece to piece, some of which are beautifully delicate while others are not reproduced at the same high quality. Like the recently published Edward Gorey's Ghosts, SMtM is a visual pop quiz for the Gorey enthusiast and a must-have volume for every Gorey collector.
Posted by ampootozote at 7:11 AM 1 comment: