Edward Gorey loved fur coats. His illustrations are peopled with men, and to a lesser extent women, wearing furs. He even designed fur coats and had a show of his creations (more on that in a later post). 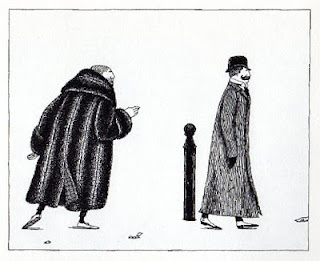 Mr. Gorey owned many different furs and wore them around New York City. I know a theatrical costume designer who told me that in the 1960's he would see Mr. Gorey, engulfed in a huge fur coat, rushing from one place to another in NYC. The designer was also a "distinctive dresser", and the two men would nod in acknowledgment as they passed one another on the street.

I have a wonderful press photo of Edward Gorey in a voluminous fur coat, "reading" The Doubtful Guest. According to the notations typed on the back of the photo, this portrait was shot in March, 1987. While not stated, I believe the picture was taken at Gotham Book Mart. In this photo, Mr. Gorey is clearly enjoying playing The Author.

On December 9, 2010, the furs owned and worn by Edward Gorey were sold at Bloomsbury Auctions in New York City. The fur Mr. Gorey is wearing in this photo was lot #12 which is described as; Finnish Raccoon dyed green with green woolen lining and extra large lapels. Very long and heavy. This coat sold for $3200.00.
Posted by ampootozote at 6:07 PM 1 comment:

For Amphigorey, A Musicale, Edward Gorey created many variations of the dragon with a small child in his mouth. This became an image closely associated with the production, and something of a logo for the show, appearing in advertising, print ads, merchandise, and in the program. Shown above are two variations. In each, the show is titled Amphigorey, The Musical. After the artwork was completed, the name of the show was changed to Amphigorey, A Musicale and the lettering was rearranged to reflect the change in the title of the show, not redrawn. 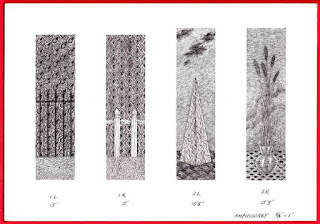 The artwork above shows four of the eight flats drawn to scale for the Philadelphia production. The flat design labeled 1R showing cattails in a vase was also used in The Gorey Details as a "walk on" set piece for The Deranged Cousins segment of the show. The two pieces of artwork shown below have appeared recently in on-line auctions, were created for the 1992 production, and are not in my collection.

The eight flats were used on either side of the stage, stage right and left as indicated. In the designs, wallpaper features prominently, and some of the other flats have "modern" sculptures and garden ornaments. The four horizontal designs shown below were also part of the Philadelphia production. The scenic design for the show was reworked by Mr. Gorey between the Philadelphia and Perry Street productions, and these set designs did not appear in the New York production. 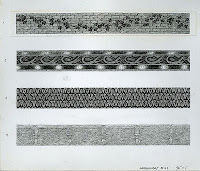 Like his set designs for the Broadway production of Dracula, the flats are wonderfully detailed. I am always amazed that the scene shops can take designs such as these and transform them to 8' tall set pieces, keeping the details intact. 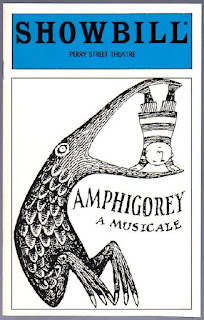 Edward Gorey designed sets and costumes for a variety of theater pieces, the most famous being the Broadway production of Dracula (see my posts from June 4, September 8 & 11, 2009) for which he won a Tony Award. The Gorey show that went through the most incarnations over the longest period of time was 1994's Amphigorey, A Musicale which was performed Off-Broadway at the Perry Street Theater in New York City.

Amphigorey, A Musicale began its theatrical journey as Tinned Lettuce: or, The New Musical, which debuted in 1985 at the theater department of NYU. In 1992, when Mr. Gorey changed the show and renamed it  Amphigorey, A Musicale, it was performed by the Plays and Player's Theatre in Philadelphia. After the run ended, Mr. Gorey once again redesigned the show (but did not change the name) and it opened at the Perry Street Theatre for an Off-Broadway run. The show was changed once again in 2000, becoming The Gorey Details, A Musicale. This final incarnation was endorsed by Mr. Gorey but he had less to do with this production than the earlier shows. The Gorey Details was in production when Mr. Gorey passed away and was presented after his death.

In each re-staging, changes made to the show were significant, and yet they were not. The evening was performed as a series of vignettes, each compact and complete in themselves, like a Vaudeville or English Music Hall turn. Each story would finish and the next would begin. This format was kept in each production even though the stories presented would change.

I missed the Philadelphia production of Amphigorey and also The Gorey Details, but I had the pleasure of attending performances of both the NYU and Perry Street productions. For Tinned Lettuce, I actually had the good fortune of being seated directly behind Mr. Gorey at the performance, and as an audience member he was almost more fun to watch than the show itself. If you did not realize it was Mr. Gorey himself making all the clatter, you might have found this expressive audience member distracting. Mr. Gorey hooted, guffawed, and thoroughly enjoyed the performances as if he had never seen them before.

Posted by ampootozote at 7:38 PM No comments: