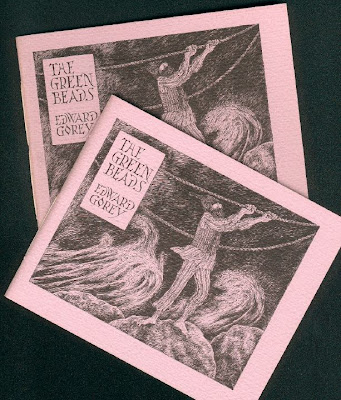 I always enjoyed The Green Beads, in part for its stilted language and also for the fact that one of the main characters is repeatedly referred to as "a disturbed person". The artwork in this book subtly goes from daylight to darkest night without losing definition in the crosshatching.

The Green Beads was published in 1978 by the Albondocani Press. It is bound in illustrated wrappers in a signed, limited edition of 400 numbered copies, and 26 (A to Z) lettered copies. The story is reprinted in Amphigorey Also. I am showing copies H/26 and 106/400.
Posted by ampootozote at 6:00 PM No comments: 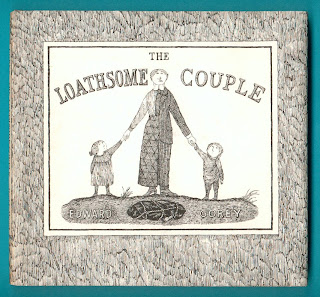 Published in 1977 by Dodd, Mead & Company, The Loathsome Couple is a literary excursion down a side road for Edward Gorey. Inspired by "true crime", this story tells of a child-murdering couple who are caught and punished. This is what people THINK Edward Gorey stories are about when they are mildly familiar with his works. This piece is actually quite atypical, being directly inspired by the Moors Murders which was an actual event. While Mr. Gorey's humor remains intact, there is a different feel to this story. It has been noted that this is one of the only books where the perpetrators are punished for their crime.

The Loathsome Couple was published in hardcover with a matching illustrated dust wrapper. The copy I am showing has been signed and inscribed to me by Mr. Gorey. This story was also issued in a signed limited edition of 276 copies (250 numbered, 26 lettered A to Z). All limited edition copies were issued in a black slipcase - the copy shown to the left is #189/250. The promotional card for this book appears at the bottom of the posting. The Loathsome Couple is reprinted in Amphigorey Also.

When the 1984 Gorey Stories exhibition was being assembled at the Minneapolis Institute of Arts, I introduced the curator/head librarian to the Gotham Book Mart so he could borrow original artwork for the show. One of the requested titles for loan was The Loathsome Couple because of the beautiful quality of the line work - we were trying to show different aspects of Mr. Gorey's drawing styles with the original artwork shown. Just before the artwork was sent from New York to Minneapolis, there was a case involving child molestation in Minneapolis that garnered national press. Because of this, Mr. Gorey refused to send the art from this book and art from The Water Flowers was substituted - not an apples to apples substitution, but this was all done very quickly. Since the printed material was already completed, a discretely worded "due to recent events" slip was laid into the promotional material.

Published in 1976 (no publisher listed), the Scene de Ballet Postcard Set was created for the New York City Ballet. This set of 10 cards (2 copies each of 5 images) came in a plain white envelope. These images were reprinted in The Betrayed Confidence and also appear in Amphigorey Again. 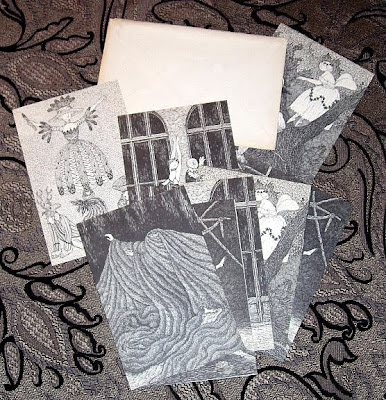 The first printing of these postcards have always been particularly difficult to find. I believe this is because they were originally sold at the Ballet and they were used by the people who bought them. I have occasionally seen partial sets offered, but complete sets in the envelope are rare. This was one of the last "holes" to be filled in my collection of first edition Gorey. Today, these images are readily available as a boxed set of notecards published by Pomegranate.
Posted by ampootozote at 6:00 AM No comments:

One of my favorite images in The Broken Spoke is that of Daffodil, the devilish dachshund who terrorizes cyclists. Poised beside the entrance to Laurel Villa, Daffodil waits, tail a quiver, to pounce on the next cyclist who passes by. One of my sisters lives with two dachshunds, but thankfully, they are much friendlier than the unstoppable Daffodil! 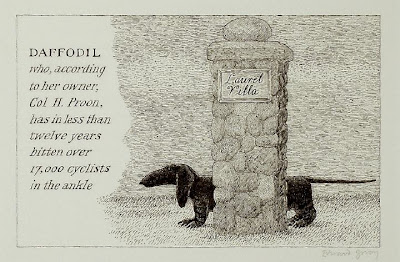 This is another one of my favorite pieces of original Edward Gorey artwork. The artwork is signed in pencil at the lower right. The line work in this piece is incredibly detailed and fine. I especially enjoy that it is a complete story in itself.

When creating artwork for his "A Collection" books, Edward Gorey wrote the date he started and completed each drawing on the reverse of the piece of art. He does not appear to have done this on other artwork he created, but it is fun to see the dates on both pieces I have from this book.
Posted by ampootozote at 6:00 AM 2 comments:

The Broken Spoke is the only "A Collection" book by Edward Gorey where the original artwork has been sold off individually (apart from one drawing which appears in Leaves From A Mislaid Album - see my posting from April 24, 2009). The fact that the art has been sold is probably the reason that these postcards have never been printed as a set of individual cards - the printing quality would not be up to the high standards needed to reproduce the cards for sale. 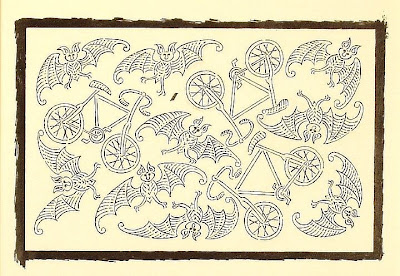 Pictured above is a piece of original artwork from The Broke Spoke. This piece is titled Nineteenth century Japanese stencil: bats and bicycles. This image is unique because it was drawn to be printed in reverse in the book (see below). Usually, when Edward Gorey wanted to create a black background for a piece of art, he would paint it in, however due to the fine lines in this piece, it made much more sense to draw the piece and print it in reverse. Mr. Gorey has drawn on his years working at Anchor to visualize what the final printed piece would look like in the book. 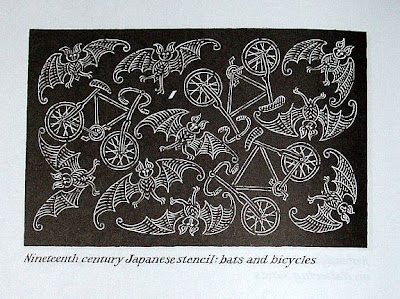 I was thrilled to get this piece, especially because it features the calling card for The Broken Spoke. As was pointed out in comments on an early blog posting, every Gorey "A Collection" book features one small white calling card hidden somewhere amongst the drawings. The use of calling cards was a Victorian practice that was perceived a a mark of distinction and style by upper class women and men. Cards with the printed name of the "caller" were presented at the door on specified days when a home was "open for visitors". Mr. Gorey adapted this practice for his books, presenting a "hide and seek" calling card in every book he produced.
Posted by ampootozote at 6:00 AM 2 comments: 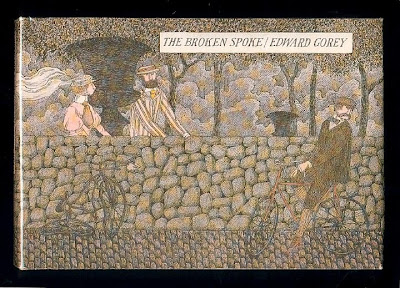 Published by Dodd, Mead & Co. in 1976 in illustrated boards with a matching dust wrapper, The Broken Spoke is a full color extravaganza of humorous postcards which all relate to bicycling. The original printing has no statement of first edition on the copyright page, but later printings are marked. This title appears in full color in Amphigorey Also. A number of the images/postcards first appeared in Sports Illustrated Magazine in June 1976.

A signed/numbered limited edition of 250 copies of this title was produced. There were also 26 A to Z lettered copies made. All the limited edition copies are housed in custom made brown slipcases. I am showing limited edition copy # 72/250. My regular first edition of this title (pictured at the top of the posting) is signed and inscribed to me by Edward Gorey on the title page and was exhibited at the Minneapolis Institute of Art in "Gorey Stories, Books and Drawings by Edward Gorey" from October 26, 1984 through March 17, 1985.

In The Broken Spoke, Edward Gorey plays with many different drawing and painting styles.

There is "classic Gorey", Oriental, Colonial, cave painting, Medieval, Italian, and even a German Expressionist card. Clearly, he was working to make the book look like someone's collection of postcards that had been collected from different parts of the world over a long period of time .
Posted by ampootozote at 6:00 AM 4 comments: 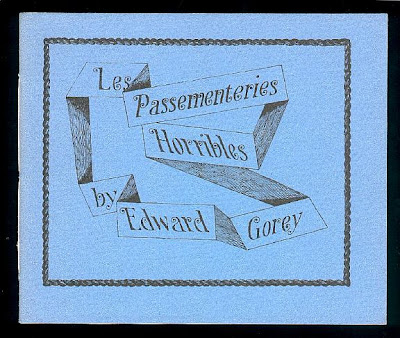 Les Passementeries Horribles is one of Edward Gorey's "text-less" volumes. The drawings all show monstrous tassels in unlikely situations. Published by the Albondocani Press in 1976 (Albondocani publication #21) in a limited edition of 300 signed/numbered copies and 26 A to Z copies, this book is reprinted in Amphigorey Also. 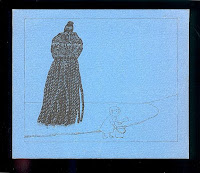 I am showing copy #131/300 (above). Also shown here is the front and back of the publication announcement card from The Gotham Book Mart (below left and right).

One of the exhibits at the Edward Gorey House that I found quite amazing shows the actual tassels that Mr. Gorey collected and used as inspiration for this book. 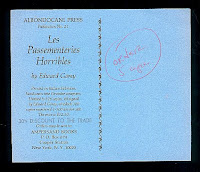 In the book, he drew the various tassels life size and correct to the smallest detail. He then created scenes and landscapes in which they they become oversized, menacing objects of doom!
Posted by ampootozote at 6:24 PM No comments: 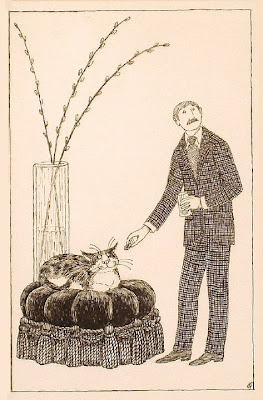 This wonderful piece of original Edward Gorey artwork came into my collection by way of the Gotham Book Mart, but originated from Mr. Gorey's periodical agent. Not much is known about this piece; the date of execution, when it might have been published, or if it was made as a personal gift to his agent. The piece is initial-signed in the lower right corner.

What I can say is that it is quintessential Gorey - a large, pampered, luxurious cat, serenely lounging in a place of honor which is being hand fed a treat by its companion. The style of the piece reminds me of some of Mr. Gorey's drawings for Old Possum's Book of Practical Cats, published in 1982.
Posted by ampootozote at 6:00 AM No comments: 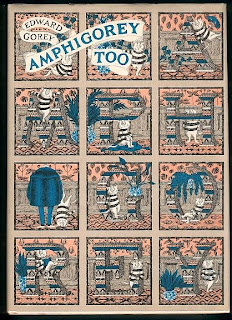 Amphigorey Too was published in 1975 by G. Putnam's Sons, New York in illustrated boards with a matching dust wrapper. The copy I am showing has been signed by Mr. Gorey. Surprisingly, this title has only ever had one hard cover printing. Amphigorey Too is currently available as a large scale paperback.

In this second anthology of Edward Gorey's works, we are once again treated to reprints of titles that (then and now) can be difficult to find in their original printings. All but one of the titles included in Amphigorey Too were published as limited edition volumes, and this was the first time most of them had been reprinted. 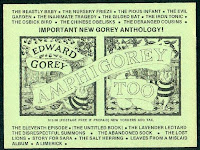 In addition to showing The Chinese Obelisks in its completed state, Mr. Gorey's original sketches are also shown, giving a glimpse into his working process. To the right, I am showing the original announcement card for this book.
Posted by ampootozote at 6:45 AM 5 comments: