When Edward Gorey passed away unexpectedly in April 2000, family, friends and fans were shocked and saddened. 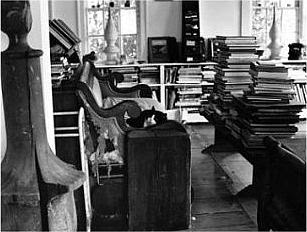 As the 10th season for the Edward Gorey House celebrates the life and work of this extraordinary man, I thought it was a good time to take a look at his home, which now operates as the museum. The museum is a wonderful place to visit, take in the yearly exhibitions, and to be able to walk through the building and grounds that Mr. Gorey called home for many years...but what was the house like when Mr. Gorey lived and worked there?

Fortunately, photographer Kevin McDermott was able to capture the house before the lengthy process of cleaning it out and sorting through all the stuff occurred.

Even more fortunately for all of us, Mr. McDermott published his photographs in the wonderful Elephant House or, The Home of Edward Gorey (Pomegranate Books, San Francisco 2003). The introduction for the book was written by author John Updike, and was originally issued as a standard coffee table hardback and in two limited editions. The regular hardcover edition is still in print and available at bookstores and on line.

Advice to young authors has always been "write about what you know", so it is not surprising that Edward Gorey wrote about everything and anything! As the photographs of his home attest, Mr. Gorey collected and was interested in everything...and I mean everything! Books, cats, rocks, toys, art, yard sale finds, things picked up on the side of the road, and popular culture all found a home with Mr. Gorey. Objects are placed with deliberate, and often amusing care inside and outside his home, creating an environment that stimulated his imagination every day. It is no wonder that his works continue to inspire countless scores of admirers today. 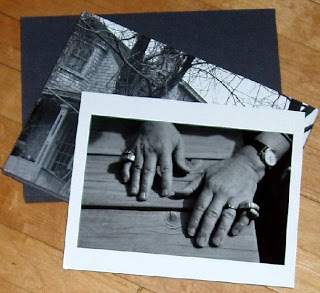 The limited editions were created in editions of 100 numbered and 26 lettered (A to Z) copies, each housed in an embossed slipcase and hand signed & numbered/lettered by Kevin McDermott and John Updike. Each numbered copy was issued with an original signed/numbered photograph of "Ogdred's Place" laid in. I have copy #100/100. The 26 lettered copies have an original signed/lettered photograph of "Edward's Hands" laid in. I am showing copy Z/26. 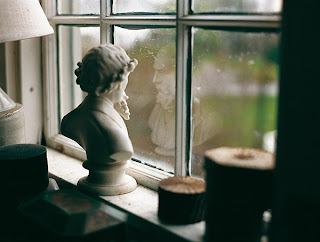 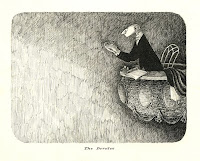 The 10th Anniversary exhibition has opened at The Edward Gorey House in Yarmouth Port, MA. The theme of this year's exhibition is Edward Gorey and the Performing Arts. This broad subject cuts a wide path through Mr. Gorey's entire career, and the exhibition is one of the most entertaining shows The House has mounted (pun intended). 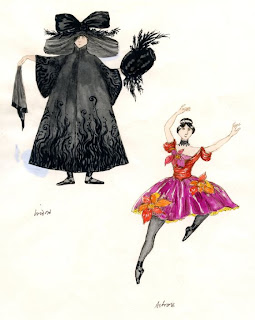 Following in the footsteps of many past exhibitions, this year's delightful show features many pieces of original artwork and ephemera which have never before been previous on public display. The two images of original Edward Gorey artwork were provided by The Edward Gorey House. All areas of the performing arts favorites are represented, from Mr. Gorey's signature designs for the Broadway production of Dracula to television, including Mystery! Also on display are selections from the worlds of poetry, opera, ballet, and a large selection of items related to Mr. Gorey's shows presented on and around Cape Cod in the 1980's and 90's.

A number of Mr. Gorey's hand made puppets which made appearances in several entertainments are displayed. Below is a video showing the rehearsal process (captured by Mooncusser Films) for a puppet show. Words to live by, "Not so much twitching, please".

For just one more week, visitors to the Boston area can get a double whammy of Gorey. The Elegant Enigmas show at the Athenaeum is closing next week...RUN, don't walk to get to the show!
Posted by ampootozote at 6:00 AM 1 comment:

In August 2002, Gotham Book Mart produced the official list of etchings and collagraphs made by Edward Gorey. This list is the only record (apart from Mr. Gorey's original notebook) of how many prints Mr. Gorey completed for each image and hand signed/numbered. As mentioned in a previous posting, prints #1 through #6 are the Diogenes images.

I have 21 prints in my collection. Over the course of several postings I will be going down the list, giving information, and showing images of as many of the prints as I can. The titles and the numbers of the prints reflect the list from GBM. 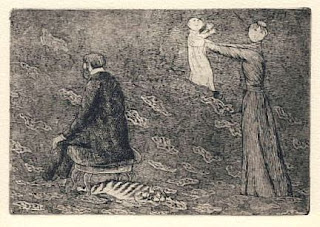 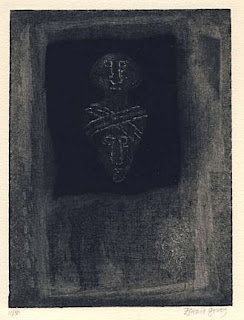 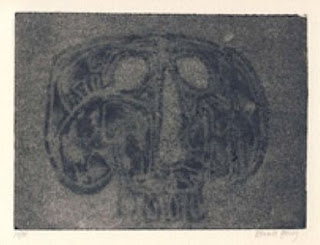 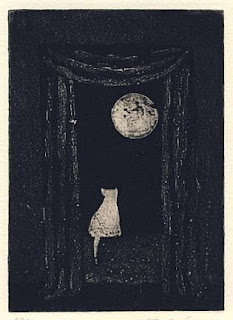 #11 Montage of Found Objects in Color - 9/50 prints were hand signed. This is the rarest of all of Edward Gorey's prints, I do not believe that the print run was ever completed. 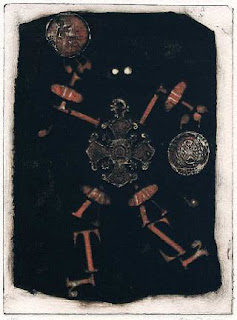 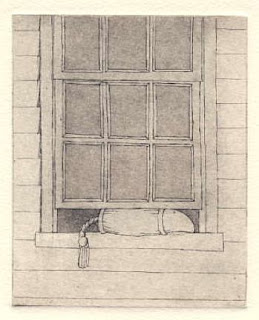 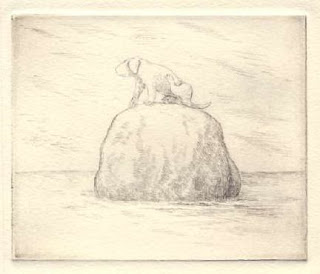 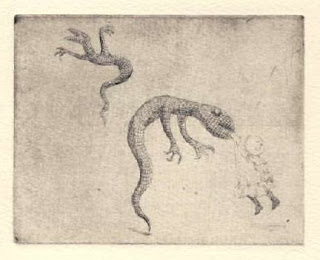 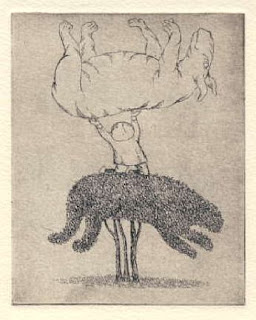 Posted by ampootozote at 6:36 AM 2 comments: