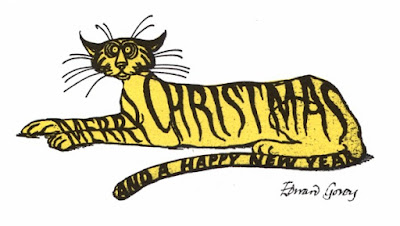 Have A Merry, Gorey Christmas!
from Goreyana


Posted by ampootozote at 6:21 AM No comments: 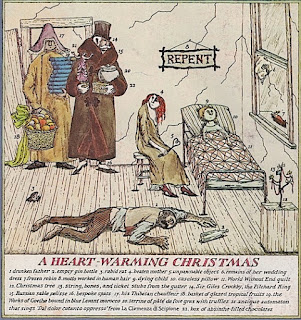 Edward Gorey created A Heart-Warming Christmas for the December 1971 issue of National Lampoon Magazine. It can be truly said that the holiday pictured is anything but "heart-warming". The scene depicted is straight out of a Victorian melodrama, complete with dying child, drunken father, and the misguided benefactor bearing gifts that would, for the most part, be unwanted and not very helpful to the distressed family.

The illustration has numbers which correspond to the descriptions below the drawing, condensing into the single image a complete 22 page book's worth of information.

The key reads as follows: 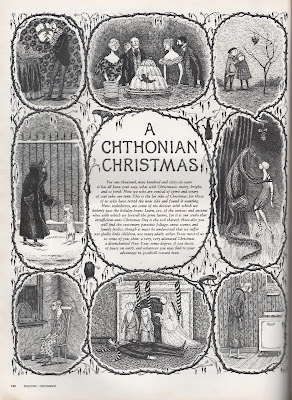 Edward Gorey was frequently called upon to provide illustrations for Christmas themed articles in magazines. Published in the December 1966 issue of Esquire Magazine, A Chthonian Christmas is one of Mr. Gorey's more unusual holiday works.

Esquire was a monthly magazine for men, and was produced at a time when magazines were truly magazines. This generously sized issue alone clocks in at 360 pages. The cover of the magazine promises 7 "New" Deadly Sins, and this theme pervades the publication. There are articles on "Fat Power", which glorifies the rotund male, as well as a cornucopia of other subjects. 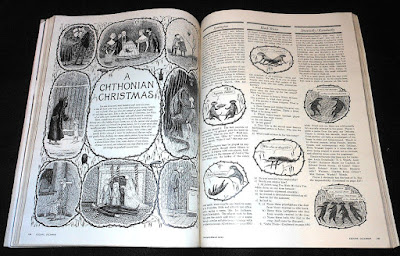 A Chthonian Christmas celebrates the darker side of the Yuletide Season. The two page illustrated spread features a beautifully detailed full page illustration by Edward Gorey. The eight vignettes illuminate the kinds of holidays none of us ever hope to encounter, from the arrival of ominous packages to a a family of children finding their father strangled in front of the mantle by one of their holiday stockings. 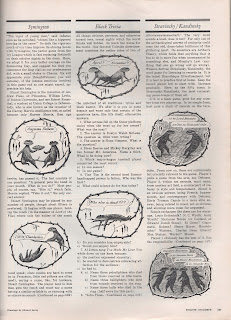 The illustrations on the right hand page are even more curious. The six enigmatic illustrations all show frog-like creatures mumbling obscure pronouncements. These creatures act in a similar manner to the dogs in Mr. Gorey's 1975 book, L'Heure Bleue, even if their statements are less comprehensible.

This issue of Esquire also introduces Edward Gorey's The Awful Vista of the Year, published in 1995 as The Fantod Pack ~ but that will be discussed in a future post. 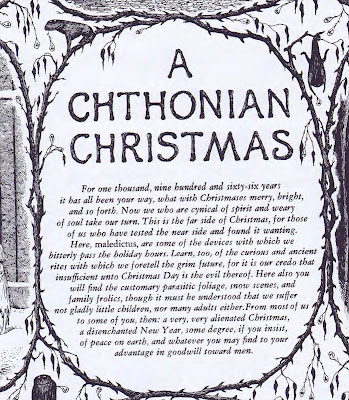 Posted by ampootozote at 8:04 PM No comments: 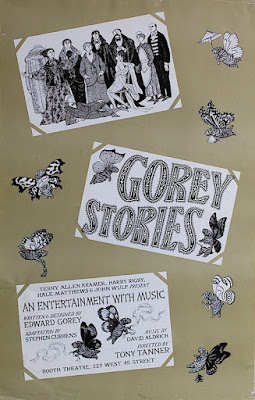 In my post from November 13, 2015, I shared theatrical photos from the Broadway production of Gorey Stories which are in the collection of the New York Public Library, Billy Rose Theater Division. After 15 preview performances at the Booth Theater, Gorey Stories opened and closed on October 30, 1978. The production was missed by many, but it did leave behind several difficult to acquire collectibles. 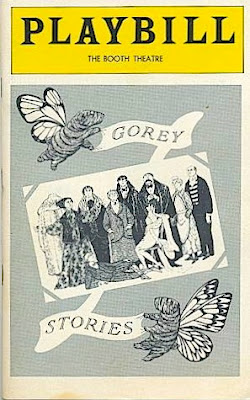 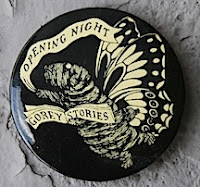 The Playbill for the show (not in my collection: image from www.movietreasures.com) is quite rare, as is the lovely pinback button created for the opening night performance.

The poster for the show features a scrapbook style image showing "postcards" of the cast, title, and theater information. The drawing of the cast was recreated for one of the publicity photographs for the show, with Edward Gorey wearing one of his fur coats, standing on the right with his back to viewer. 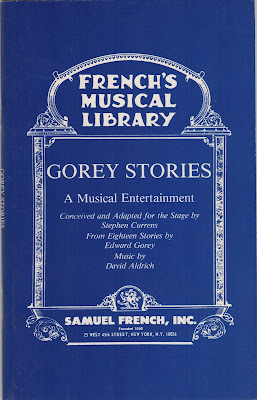 The libretto for Gorey Stories was published by Samuel French, Inc. and it is something of a disappointment for the collector. While it reproduces all of the dialog from the play, it has almost no stage direction and no score. The musical accompaniment presumably needed to be ordered separately. Since the dialog consists almost entirely of the exact wording from the various Gorey books put on stage, and most hardcore Gorey fans can recite the words from their favorite stories by heart, there is little to learned from this volume.

There have been a number productions of Gorey Stories undertaken by theater companies since its original run, and there are several videos on YouTube. Below is a snippet from the 2010 Blackfriars Theatre production.


Posted by ampootozote at 7:33 AM No comments: