In 1959, Edward Gorey left his position as an art director at Anchor Books (see my post from October 7, 2008) and joined forces with Jason Epstein and Celia Carroll in the newly formed Looking Glass Library. The idea behind this publishing venture was to revisit and repackage classic children's books for a modern (1960) audience. 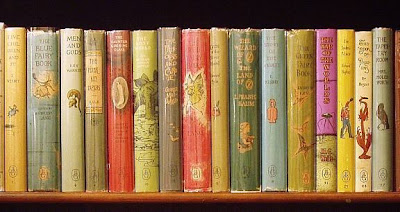 Building on their experiences at Anchor, in which academic and classic literature was given a fresh look through modern cover art, books in the LGL series were sized to look alike and each title was illustrated with interior illustrations and colorful covers. The LGL books appear as a set when shelved together and each book in the series is numbered on the spine. Mr. Gorey worked as the art director as well as editor for the series. Many (if not all) of the titles draw on Gorey's personal taste in juvenile literature and authors chosen for the series include (among others) E. Nesbit, Andrew Lang, and L. Frank Baum.

Looking Glass Library was a short lived venture which only lasted until 1962. After LGL disbanded, Mr. Gorey (who turned 37 in February of that year) decided it was time to work as a freelance artist/writer/ illustrator and never held a full time job for an outside employer again.

Probably the two most sought after titles in the series are The War of the Worlds by H. G. Wells and The Haunted Looking Glass which is a series of classic ghost stories selected by Edward Gorey. In both of these books, Gorey provided new cover art and interior illustrations.

Mr. Gorey's illustrations for The War of the Worlds are humorous rather than scary and seem to be inspired by a day at the beach. His aliens look like a cross between an octopus and a jellyfish. I wonder if he included this title in the series because he found it to be humorous rather than scary and illustrated it accordingly. When asked about his illustrations for TWotW in later years, he is quoted in an interview as saying "the less said about those, the the better". 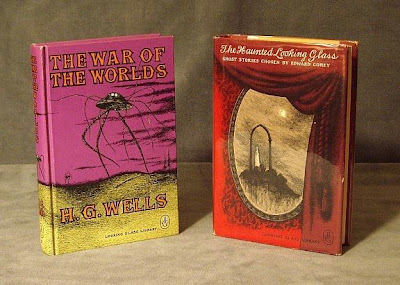 In contrast to the cartoon style of TWotW, Gorey created some of his most beautiful artwork to date for The Haunted Looking Glass. For this title, he provided one full page illustration at the beginning of each of the tales he selected. The illustrations are elegant, haunting, stylish and fully realized - in short, they represent some of his finest illustration work.

The two volumes shown above are both first editions. There have been recent reprints of both titles. My copy of The Haunted Looking Glass was included in the show, "Reading and Collecting Books, Minnesota Book Collectors" which was held from June 8 to August 11, 1996 in the Cargill Gallery at the Minneapolis Institute of Arts.
Posted by ampootozote at 6:00 AM

Were these originally printed with dustjackets?

Yes, the books had dust jackets.

The dust jacket art was identical with the art on the book.