If The Pointless Book got me angry with Edward Gorey (see my posting from October 16, 2010), then The Dancing Rock and The Floating Elephant sent me into despair. Fortunately, there were still many gaps to be filled in my collection, so there were lots of interesting books, prints and artwork to collect even though these newly published volumes were disappointing. 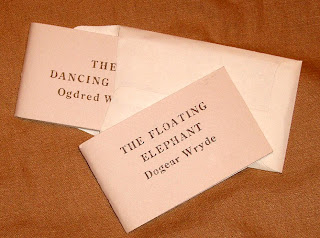 The Dancing Rock/Floating Elephant is a simplistic flip book that can be viewed "dos-a-dos", meaning that the flip book could be used in either direction. One side features a rock that moves across the page, then the book is turned over and the rock is replaced by an elephant. Edward Gorey had always experimented with unusual formats in his books and it seemed natural that an animated flip book would become part of his offerings.

The Dancing Rock by Ogdred Weary and The Floating Elephant by Dogear Wryde was published in 1993. No publisher is listed for this title. A signed, limited edition of 100 copies was issued in a plain white envelope.

The limitation is the most interesting thing about this book. Inside one cover, the limitation goes forward from 1/100 and is signed by one "author", flipping the book, the limitation descends from 100/100 and is signed by the other "author". My limited edition is signed 6/100 Dogear Wryde & 95/100 Ogdred Weary. The second book I am showing is the regular edition and none of the non-limited copies are signed. I am also showing the announcement card from Gotham Book Mart.
Posted by ampootozote at 6:00 AM