The Edward Gorey House has released its three new limited edition prints for 2012.

As you will see, this year's selection is firmly rooted in artwork created by Edward Gorey in 1973, a time period when Mr. Gorey was at the height of his artistic powers: 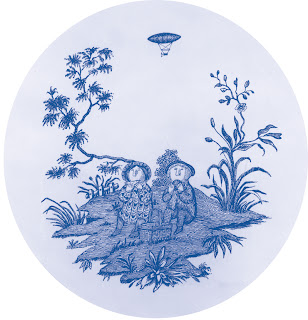 Blue Plate Special - image: 7 5/8" x 8 1/8", paper 9 1/2" x 11 1/2" - Unsigned, Limited edition of 200 numbered, and 26 lettered impressions - This unusual image was one of the Fine Art pieces Edward Gorey created for his first Graham Gallery show in 1973 (see my post from June 30, 2009). It appears in the list of works as "#7 China pattern, picnic", but to my knowledge has not been reproduced until now. This is one of several pieces of art included the show which was inspired by china patterns. 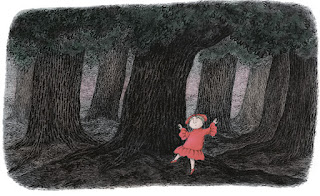 Dancing on the Sabbath - image: 6" x 10 1/4", paper 9 1/2" x 11 1/2" - Unsigned, Limited edition of 200 numbered, and 26 lettered impressions - This image was one of the Fine Art pieces Edward Gorey created for his first Graham Gallery show in 1973 (see my post from June 30, 2009). The artwork was reproduced in the gallery booklet for the show. This lovely image looks as though it may have been inspired by The Red Shoes, although it is unclear if the original art was colored by Mr. Gorey, or was originally black and white and colored for reproduction. 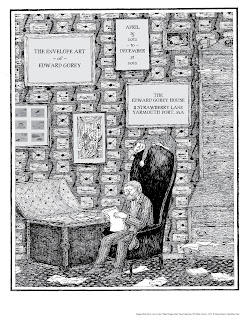 2012 Envelope Art Poster - 11 3/4"  x 15 1/8" - This image is only available as an exhibition poster and not as a signed limited edition print. The fantastically detailed cover artwork from Other People's Mail (published in 1973) has been adapted to create this exhibition poster.
Posted by ampootozote at 6:35 AM