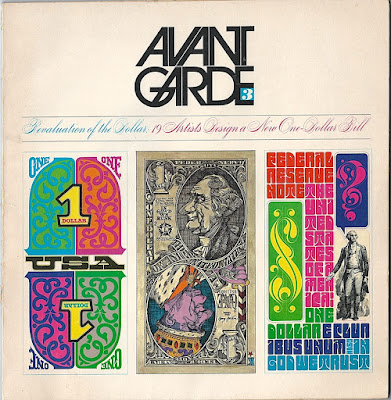 All the recent discussion about redesigning the United States' twenty dollar bill is nothing new. In May of 1968, Avant Garde Magazine invited 19 artists to contribute new designs for Revaluation of the Dollar: 19 Artists Design a New One-Dollar Bill.  The article states that the magazine commissioned the designs, "on the theory that it's about time somebody did." The redesigned dollar bills are almost all 1960's political statements in full color featuring images which at the time would have been scandalous.

Edward Gorey's contribution is quite beautiful and typically enigmatic. It is also one of the least politically charged of the offerings, some of which take pot shots at President Lyndon Johnson and race relations.