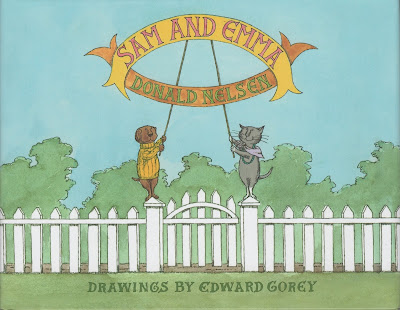 It is rare that the reprint of an illustrated children's book is cause for celebration, but such is the case with Sam and Emma by Donald Nelson. Originally published in 1971 by Parents Magazine Press, this title is illustrated by Edward Gorey. Created during an exceptionally prolific time in Mr. Gorey's career, the book is lavishly illustrated with over 30 beautifully executed watercolor paintings.

The title characters, a gentle dog and critical cat, travel together and visit woodland creatures. Through their encounters, the cat learns to become more tolerant of creatures different from herself. 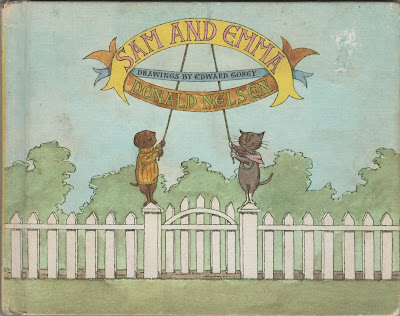 While the original printing of this title is include in most Edward Gorey collections, it is rarely a cherished volume. This is because the printing quality of the book is downright poor (see photo above). The pictures are fuzzy and out of focus giving the viewer the impression that they need glasses. For the new printing (Dover Publications Inc. 2016, see photo at the top of this post), The Edward Gorey Charitable Trust has used the original paintings from the archives and had them newly photographed. The artwork in this new printing has been very carefully executed and the paintings appear fresh and alive.

A curious feature of this volume is Edward Gorey's rendering of Emma, the critical feline. Emma's appearance in this book is a direct precursor to the Amphigorey Cat - the ubiquitous cat which will come to be known as the signature Gorey Cat. Emma is drawn with a rough coat of fur, white paws and wears a scarf and beaded necklace, but the shape of her body, tail, head, and face are almost exactly like the streamlined Amphigorey Cat which will make its official appearance one year later.

Up to this time, Mr. Gorey drew cats in a (more or less) realistic manner. Beginning with Sam And Emma, his cats took on a more vigorous and distinctive personality. Emma is seen lounging, balancing, dancing, and tripping lightly through the book in a way that will become the hallmark behavior of the Amphigorey Cat. It is also amusing to note that other animals in Sam And Emma wear bits and pieces of clothing that will be appropriated by the future Cat. Sam wears a turtleneck sweater (vertically striped as opposed to the Cat's horizontal stripes), while the raccoons will have their colorful striped scarves appropriated by the future feline.

Posted by ampootozote at 7:05 PM

In one of the more peculiar instances of book publishers getting confused, for the British edition of "Sam and Emma", published in 1971 by Abelard Schuman (who went on to publish the UK-only portmanteau edition of Unstrung harp and Listing Attic), the creative roles of Nelsen and Gorey were reversed, with Gorey being credited as the writer and Nelsen the illustrator. Below is a link to a bookseller's posting of this revised cover. But what on earth inspired them to think that the US edition had somehow got it wrong? After all, the illustrator had clearly done the cover themselves and you would have thought that they would have got it right!

Continue to love the blog!