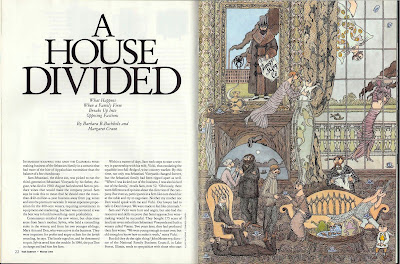 Edward  Gorey created The Frawgge Mfg. Co. illustration for the Winter 1994 issue of a magazine called Your Company. This now iconic image is a full page illustration which accompanies an article outlining the pitfalls of being part of a family owned business concern when things go wrong. This is yet another example of Mr. Gorey creating a major piece of illustration art which was used one time in a magazine very few people have heard of.

Frogs held a fascination for Edward Gorey. He collected rocks that reminded him of frogs, sewed beanbag frog dolls, and included whimsical frogs in many illustrations. The Frawgge Mfg. Co. illustration takes the subject of frogs to new levels. Every surface and object in the scene is either shaped like a frog or is decoratively covered in frogs.  Recognizing the complexity and detail in this image, the Edward Gorey Charitable Trust authorized the creation of a jigsaw puzzle using this piece. To truly appreciate the beauty of this image, spend a few hours making the puzzle! 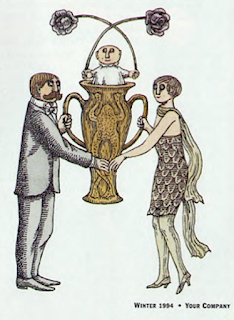 Edward Gorey also created a delightful spot illustration for this magazine piece to accompany the sidebar entitled Patching Things Up, which gives advice on how to rebuild broken bridges.