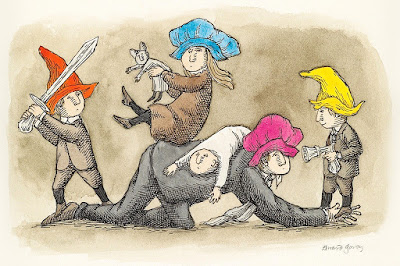 On Thursday December 14, Swann Gallery in New York City held its semi-annual Illustration Art Auction which once again included a nice selection of works by Edward Gorey. Six lots, comprising fifteen pieces of original artwork were offered, and all sold. 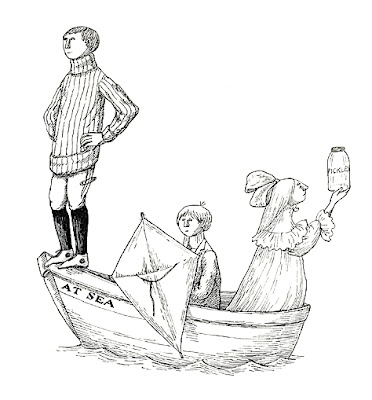 The first five lots showcased pen and ink drawings from The Monster Den, or, Look What Happened at My House, a book by John Ciardi that was published in 1966. The first drawing, Miss Myrna, Small Ben, and John L - Those Three, a delightful drawing of the three children in a row boat, sold for more than twice the high estimate. 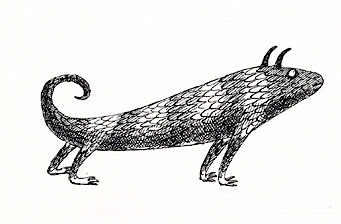 After four drawings from this volume were offered individually, a final lot comprising ten drawings brought almost double its high estimate. Nine of these drawings showcased individual vignettes of the above children. The tenth drawing included in this lot was a fantastic Gorey creature.

The final piece of artwork by Edward Gorey in the sale was a pen, ink and watercolor that was published in the New York Times in December 1987 to accompany a piece entitled Avoiding Christmas written by Quentin Crisp. With his typical dry wit, Mr. Crisp, whose birthday fell on Christmas Day, disparaged the holiday. Mr. Gorey's amusing illustration shows the perils encountered when entertaining other people's children.

As with previous sales, works by Edward Gorey continue to garner strong interest among admirers and collectors.