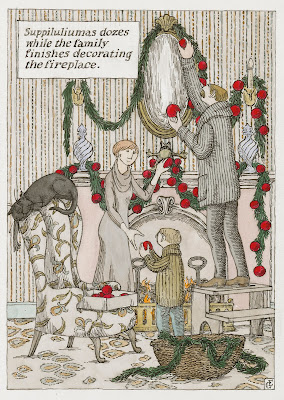 Christmas came early for several lucky bidders at Swann Auction Galleries Illustration Art Auction on Tuesday December 10. Eight pieces of original artwork by Edward Gorey were offered for sale, with only one of the pieces falling slightly below the presale estimates, while the rest sold at or above the estimates. One piece, the 1988 full color cover painting created for Print Magazine sold for $16,250.00 (including buyer's premium) far exceeding the presale estimate of $7000 - $10,000. A seasonally appropriate highlight of the auction was the full color Christmas card design (shown above), which sold for $7000.00. 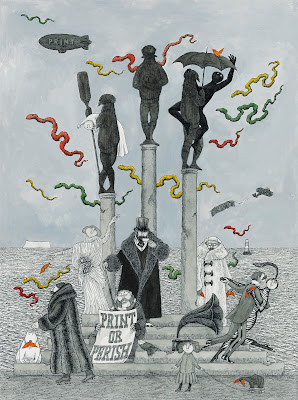 All but one of the pieces in this sale were offered by The Edward Gorey Charitable Trust, being culled from the Edward Gorey archives and were sold to benefit the charitable donations made to animal causes by the Trust. The winning bidders are now the first private owners of the works, essentially purchasing the pieces from Edward Gorey himself. Purchasing directly from Mr. Gorey (either from the artist himself or through Gotham Book Mart) has not been possible since the time of his death in early 2000. For the past nineteen years, original art has only been available on the secondary market and was limited to pieces sold before February 2000.

Goreyana will take a look at some of the other pieces from this auction in in upcoming posts.

Posted by ampootozote at 6:20 AM

I have a copy of that Print magazine - just love it!
Lucky person who could afford the original!