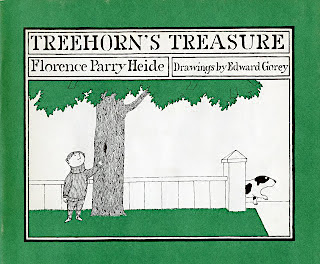 Following my post from November 23, 2019 regarding the disappearing dragon from the rear cover of Treehorn's Treasure (https://goreyana.blogspot.com/2019/11/where-is-dragon.html), I was curious to know what might exist in the Edward Gorey archive that could shed light onto the process of removing more than half of an image for publication. I contacted the Edward Gorey Charitable Trust, and after a little digging, archivist Will Baker was able to provide me with images of existing artwork that answer the question, "How did the dragon disappear?".

In 1981 printing an illustrated book was very much a hand crafted endeavor. Today, layouts and printing dummies are created on computer, but in 1981 everything was done by hand using physical copies of the artwork, photography, and printed photostats. To print an illustrated book, the artist would send the completed artwork to the publisher. The drawings would be photographed and full sized photostats would be printed to be used by the printer. A board would be made for each page, and the stat would be pasted into position along with a stat of any type that appeared on the same page. This would once again be photographed and sent to the printer.

On to the artwork. It is of interest that the image appears to have hit two roadblocks on its journey to the back cover of the book. 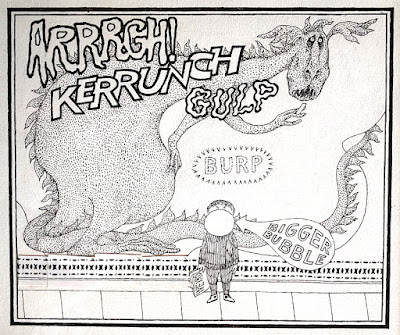 Part One:
The artwork with dragon is created by Edward Gorey and sent to the Publisher. Someone at the publisher, probably editor John Briggs, objects to the imagination bubble surrounding the dragon coming down on the lower left side and wants to extend the decorative wall border all the way across the image. Edward Gorey approves the change, and a xerox border extension is affixed to the original drawing to make the change. The drawing is then photographed, a stat is made and a color separation is generated which indicates that green will be filled in on the bubble and dragon's body. Everything is ready for printing. It should be noted that the modified image has now become confusing - the dragon now appears to be standing on the border and also flat on the wall. This kind of visual confusion can result when a non-artist begins to alter an artist's work.

Part Two:
Author Florence Parry Heide views a proof or stat of the back cover and strongly objects to the dragon and requests that Edward Gorey remove it entirely from the back cover. Edward Gorey agrees to the change, but the book is now ready for printing and there is no time to redraw the art. 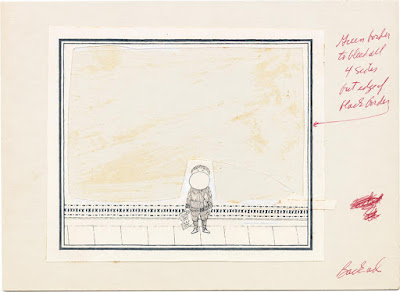 The fastest way to remove the dragon is for a layout artist at the publisher to take the stat of the back cover and modify it. This modified stat is the piece of artwork now in the Gorey Archives. Using an Exacto knife, the stat is cut and the dragon is removed from the board. The glue residue (most likely rubber cement) and cut lines on the surface of the board shows that the stat was carefully cut and portions removed. A second stat is cut and used to repair the wall border where the "Bigger Bubble" had overlapped on the original artwork. White paint is applied to remove some small excess lines. The artwork now modified and is photographed once again. 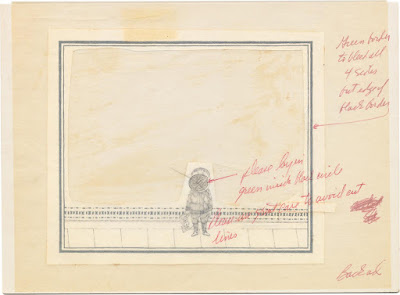 Notations for the printer are added both on the artwork itself and on a tissue overlay, and the book is ready for printing. Today, the changes would be discussed by text or email and the image would be modified in a matter of minutes on a computer, probably by the artist them self. In 1981 these changes would involve multiple phone conversations and, if Edward Gorey wanted to see the changes, an overnight letter with a copy of the adjusted artwork would need to be sent. There would also be no physical record of the process to study almost 40 years later.

Posted by ampootozote at 7:23 AM