John Bellairs - The Mansion in the Mist 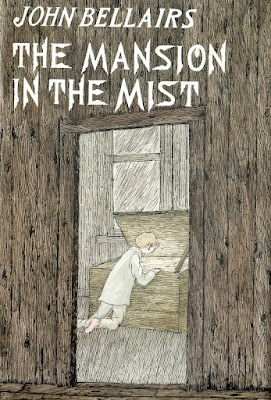 The cover painting shows a room in a rustic cabin wherein young Anthony Monday is kneeling beside a trunk, dressed in his pajamas in the middle of the night. The trunk is actually a portal to another world/dimension that only opens at certain times. 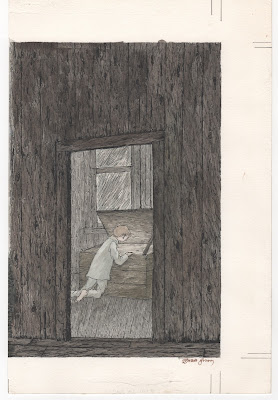 The painting is a watercolor with pen & ink that is quite meticulously executed. The simple composition with the crooked doorway perfectly conveys a sense that all is not right. As can be seen when comparing the original artwork to the printed cover, the colors in the art are subtler and more painterly than when it was reproduced. Mr. Gorey demonstrates his considerable skill at drawing textures and patterns in the wooden walls and floor. 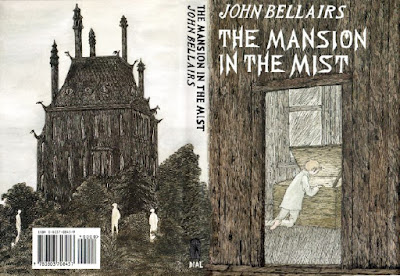 As can be seen in the above scan of the wraparound dust jacket, this is only half of the original artwork. In the mid 1990's Edward Gorey needed to raise funds to tackle some major home repairs, and to this end he sold original artwork from his archive through the Gotham Book Mart to finance the work. When queried by Gotham as to how he wanted the pieces from the Bellairs' series sold, Mr. Gorey stated that he was OK with them cutting the dust wrapper paintings in half if someone only wanted to purchase part of a design.

To my knowledge, three Bellairs titles were cut and sold in halves: The Mummy, the Will, and the Crypt; The Mansion in the Mist; and The Lamp from the Warlock's Tomb. Fortunately, the practice of cutting the art up was quickly ended, and future sales were for the full dust jacket designs only. I now own two of the cut front cover paintings from this series.

Posted by ampootozote at 6:44 PM

I love The Mansion in the Mist. How cool that you have the cover art!