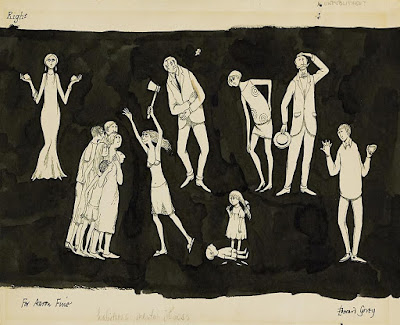 One of the more "original" pieces of original artwork by Edward Gorey included in the July 16, 2020 Illustration Art Auction at Swann Galleries was Habitions Mental Illness. This piece is something of a humorous enigma. The title, written in pencil across the bottom of the drawing by someone other than Mr. Gorey is presumably correct, but no publication has yet been discovered. In the upper right hand corner, Andreas Brown's distinctive handwriting says, "UNPUBLISHED?", but this was probably a guess on the part of Mr. Brown.
Most likely, this piece was done for a magazine article. The denotation "Right" suggests that it is possibly one half of a pair of drawings or that there was a title to the left on a facing page. The artwork has the notation, "For Aaron Fine" and is signed in ink. The figures and signature are stylistically consistent with pieces drawn in the late 1960's and 70's. There is a gentle matte line above and below the image which indicates that the piece was framed and displayed for a time in a home or office and exposed to sunlight in the frame.

Mr. Gorey often gifted or sold drawings to professional colleagues (agents, editors, publishers, art directors, etc.), friends, or fans who showed an appreciation for his efforts. During the 90's there was heightened interest from collectors in obtaining original artwork, and The Gotham Book Mart was the place where a knowledgeable collector began their search. Gotham bought and sold collections and individual pieces of original artwork and it can be presumed that Mr. Fine or his estate sold the drawing to Gotham in 1998 and that Andreas Brown then sold the piece to a collector. 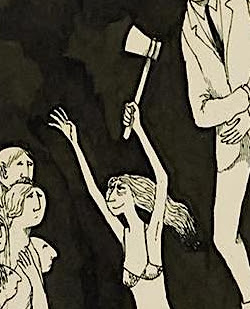 Each person depicted in this piece is in a state of physical and mental distress. The physical maladies are best described as quirky. The woman holding the hatchet has two right hands! Given the overall subject of this piece, this may have been intentional, but one has to admit it is odd. 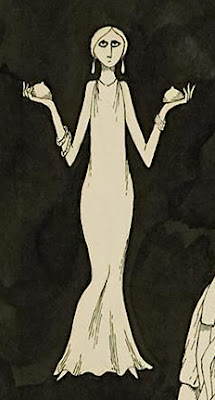 A favorite, slightly racy member of the party is the woman in the upper left corner who is holding what appears to be a breast in each hand. Are her breasts detachable or is she considering enhancement surgery?
Mr. Gorey has painted in the background using a brush and black ink instead of cross hatching the entire drawing. In the photo of the artwork the brush strokes are obvious. When the image was printed, the black would solidify. This piece is a prime example of how a piece will change when printed, and how Mr. Gorey understood exactly how the printed image would turn out. 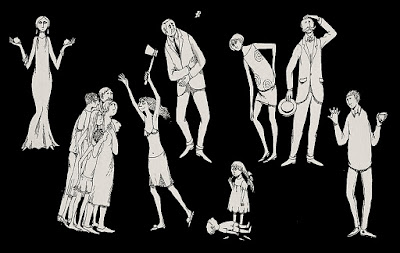 Posted by ampootozote at 7:27 AM

I am actually the one who won this! I am so excited. :D

Congratulations! This is a great piece. I also picked up a Gorey piece in this auction...more on that one in a future post.