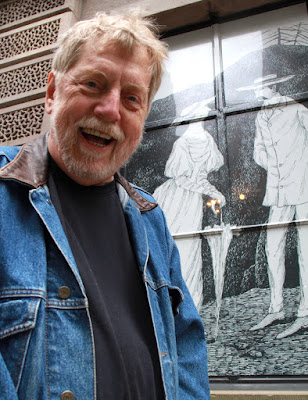 The world of Edward Gorey has lost a staunch and cherished friend. It is with much sadness that we say goodbye to Edward Bradford, a fellow collector, board member of The Edward Gorey House, and Mr. Gorey's official bibliographer who passed on December 26, 2020.

Over many decades, Edward Bradford amassed a staggering Gorey collection that included examples of almost everything produced by the prolific artist. Mr. Bradford was frequently seen attending auctions, book shops and fairs in New York City on his quest for rare (and ephemeral) Gorey items. Recently, the Library of Congress acquired this impressive collection and has plans to publish Mr. Bradford's long anticipated Edward Gorey bibliography in conjunction with Rutgers University. His small volume, F is for Fantods gives us a preview of the upcoming bibliography.

Edward Bradford was an invaluable resource to every Gorey collector and dealer he knew. Generous with his time and knowledge, Mr. Bradford excelled at helping others figure out Gorey conundrums.

Photo of Edward Bradford outside the 2010/11 Elegant Enigmas exhibition in Boston courtesy of Jonas Ploeger.

Posted by ampootozote at 7:46 PM