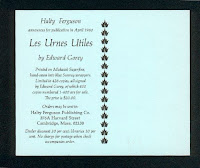 To the right is the announcement card used to publicize this book - the front of the card (not shown) shows the cover of the book. In 1990, Mr. Gorey used a translation of Les Urnes Utiles for the title for a play he produced on the Cape, Useful Urns.
Posted by ampootozote at 6:00 AM

What is the original publication year of this book?

1980...thank you for the question - I have adjusted the post to include the date.