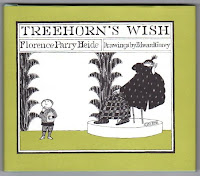 In 1971, Edward Gorey illustrated The Shrinking of Treehorn for author Florence Parry Heide (see my posting from April 30, 2009). The "Treehorn Trilogy" wasn't completed until the 1980's with the publication of Treehorn's Treasure (1981) and Treehorn's Wish (1984). All volumes in the trilogy were published by Holiday House, New York. The books were published as hardcover books with illustrated dust jackets. The printed boards are shown at the bottom of this listing. 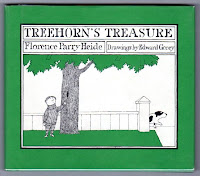 There is a quirkiness to all of the Treehorn stories that would have very much appealed to Edward Gorey. The adults really don't interact with young Treehorn, but rather keep following their own paths while minimally acknowledging the boy and what he is trying to tell or explain to them. In the end, Treehorn is usually left to use his own ingenuity to work out his situations.

According to the Edward Gorey House web site, original artwork from this series will be on display this year at the museum.

Posted by ampootozote at 5:00 AM