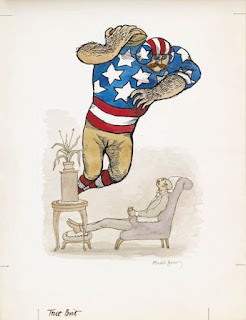 Included in the Gorey items were two pieces of original artwork. One of the  pieces, entitled True Brit, is a football-themed watercolor. This vividly colored piece of art was created for TV Guide and appeared in the August 2, 1986 issue of the magazine.
Posted by ampootozote at 7:38 AM