The Worsted Monster by Edward Gorey 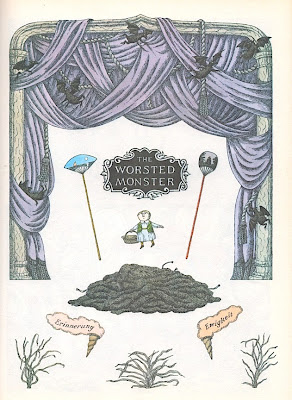 Edward Gorey would often preview new works in magazines and later publish them as books. There are a number of pieces that appeared in periodicals which have never (as yet) appeared outside the original magazine publication. One such piece is The Worsted Monster.

The Worsted Monster is a toy theater, complete with three act libretto, that appeared in the June 1975 issue of National Lampoon as part of their Rainy Day Sunday Funbook Issue. The sets and participants are printed on stiff card stock within the magazine, but because they are printed on both sides of each page, someone would have had to buy two copies of the magazine to actually cut out and perform the play. 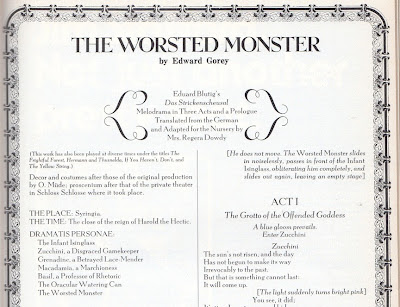 Mr. Gorey pulled out many of his pseudonyms for this piece. It was written by Eduard Blutig, translated by Mrs. Regera Dowdy and shows the original decor and costumes by O. Mude.  The play itself is a delight to read and is full of Mr. Gorey's innovative wit. 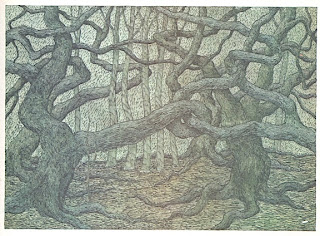 Each of the three acts has a full color backdrop, a cast of costumed characters, various set furnishings, and props which can be cut out and placed inside the proscenium arch on the first page. There are two interior backdrops (Act 1 & Act 3) and one exterior - The Fearful Wood (shown above) which is used for the Prologue and for Act 2 (note the calling card in the lower right hand corner that Mr. Gorey included in all his primary works). Each of the backdrops are wonderfully detailed.

The Worsted Monster remains one of Edward Gorey's hidden masterpieces from the most prolific time of his career. Perhaps one day it will be published so it can finally take its place amongst his other primary works. 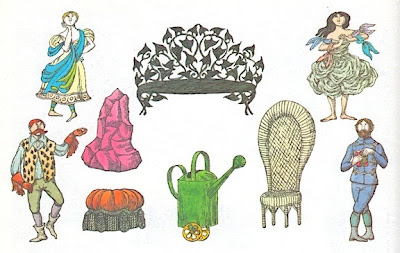 Posted by ampootozote at 7:38 AM

Thanks for your very thorough and informative Edward Gorey blog. Usually I just drool at the things you post, because they're beyond my means. This particular item was too good to pass up. I just ordered a copy on Amazon! There are currently a couple left for around $10.