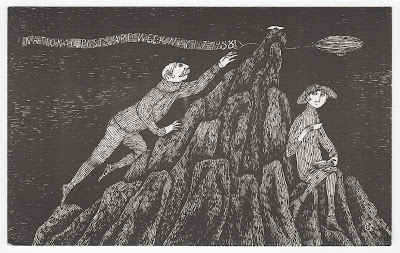 It is always exciting to receive something by Edward Gorey as a Christmas gift.  This year I was presented with one of the National Post Card Week cards that I have been missing. Published and distributed annually by Gotham Book Mart, this is a delightful series of 13 cards, each with a different image created by Mr. Gorey.

This card, the fourth in the series, depicts a couple reaching the summit of a mountain on which is balanced an elusive post card. The man is creeping closer to the card while woman has already begun her elevenses. A blimp can be seen in the background trailing an informational banner.

Posted by ampootozote at 8:06 AM