The 2012 Edward Gorey House show, The Envelope Art of Edward Gorey features Mr. Gorey's hand decorated envelopes sent to Peter Neumeyer in 1968/'69. While these important pieces are, by themselves, worth a trip to the museum, there is a lot more to see at this show than just this amazing collection. Note: the individual envelopes pictured here are presented courtesy of the Edward Gorey House.

Edward Gorey created fanciful correspondence from his earliest days when he went away to college. Letters written to his mother and close friends are gathered together for the first time in this show, giving us an intimate view of the budding young artist.

Until recently, the style of drawing on these envelopes has only been seen by collectors in his earliest published works; the books of Merrill Moore (see my posting from October 22, 2008), and The Unstrung Harp (October 11, 2008 posting). Young Edward also had his first art exhibition at the Mandrake Book Shop while in college (October 10, 2008 posting). After this time, Gorey altered the way he drew figures, moving away from the elongated heads of his early creations. In the years to come, his creatures - notably the Doubtful Guest and Figbash, would form a visual link to these early works.

Also on display for the first time are selections from a series of envelopes sent to one friend, beginning in 1974. These fantastic pieces of art were drawn and watercolored on the fronts of envelopes which contained single line, hand lettered quotes which referred to recent conversations between the two men. The recipient quickly noticed that each envelope he received was numbered, and a notebook was found in Mr. Gorey's home after his death in which he kept track of the correspondence. Previously, the only glimpse of these remarkable pieces was in a New Yorker feature from July 8, 2002. 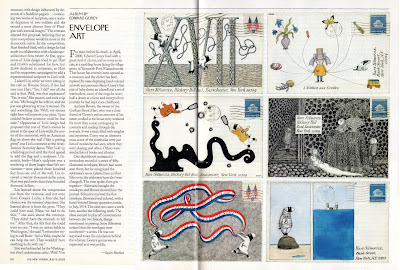 Posted by ampootozote at 8:35 AM

I really love this blog. It wonderful to see some of these works because I live so away, I would not be able to visit the house.

Thank you, I am glad you are enjoying the blog...