Creating Your Own Gorey-esque Soap Story 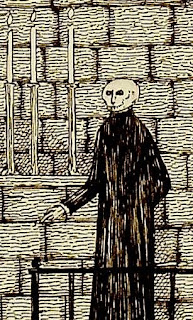 While reading the newspaper a few years ago, I came across the "Soap Opera Update" in the television section. The update covered the past week and went through all the Soaps, telling what had happened on the shows. As I read these short sentences I was struck by how you could create a pseudo-Gorey story by taking one line from each soap and stringing them together.

Here is an example from the update by Dana Block that appeared in Monday's Minneapolis StarTribune. The Soaps involved are All My Children, As The World Turns, The Bold And The Beautiful, Days Of Our Lives, General Hospital, Guiding Light, One Life To Live, and The Young And The Restless.

David drugged Krystal's drink.
Dusty was arrested for shooting Paul during an altercation.
Tragedy struck during a heated argument between Rick and Phoebe.
Chloe decided to keep her engagement to Lucas a secret after hearing Kate's bad news.
A fire broke out in the cabin where Jake was being held.
Mel urged Bill to hide a scar that could implicate him in the kidnapping.
Viki disowned Todd.
Victor told Ashley about Jack forgetting the diary.

Not quite as inspired as Mr. Gorey's prose, but since he watched so much television, I think EG would have found this amusing! Now, if we just had some illustrations...
Posted by ampootozote at 5:00 AM