I have two pieces of original artwork that Edward Gorey created for Friends Magazine. The first is a delightful image of a small boy "flying" behind a large shaggy dog that is chasing a butterfly. This playful image shows the sweetness that Mr. Gorey achieved in many of his drawings of small children at play. This running dog piece is beautifully rendered with EG's fine line work drawn with a light touch. The lines of this piece look as though they barely touch the page, furthering the impression of movement. 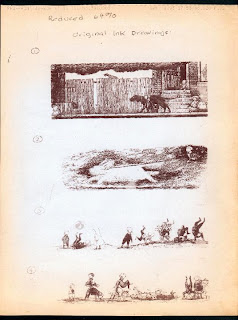 I acquired this piece of artwork in 1993 from Gotham Book Mart. At that time, they had several pieces of original artwork from the collection of Robert Weeks who was the Friends art director and had commissioned illustrations from Mr. Gorey for Friends. The photos show a (fading) three page fax I received from Gotham at that time with the artwork from Friends they had available. In 1993, I was only able to get the dog piece. I recently acquired a second piece from this collection and will show it in a later post. 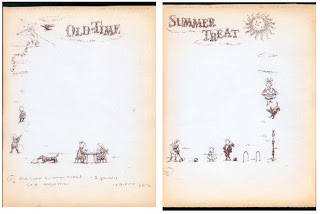 Posted by ampootozote at 6:00 AM