The Curse of the Blue Figurine 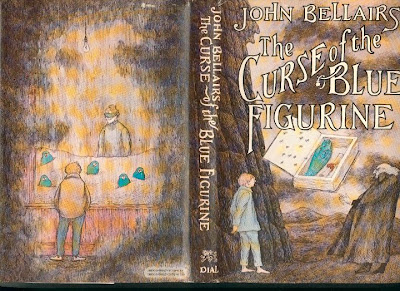 After The House with a Clock in Its Walls, the series of books by John Bellairs continued through three more volumes with different illustrators before returning to, and sticking with Edward Gorey as illustrator for the remainder of the series.

Book 2, The Figure in the Shadows, 1975, published by Dial Books for Young Readers, illustrated by Mercer Mayer - This book once again features Lewis Barnavelt, and introduces Rose Rita Pottinger who will become his best friend throughout the series.

Book 3, The Letter, the Witch, and the Ring, 1976, published by Dial Books for Young Readers, illustrated by Richard Egielski - This story puts Rose Rita front and center. This is the last story to feature these characters until book #16 in the series, published in 1993 after Mr. Belliars' death.

Book 4, The Treasure of Alpheus Winterborn, 1978, published by Harcourt Brace Jovanovich, illustrated by Judith Gwyn Brown - This book is the first of the Anthony Monday books. It is interesting that all the juvenile books written by John Bellairs are considered one series, even though there will be three distinct sets of characters and settings. The books have a common style and use of the supernatural throughout, and every title is listed at the beginning of each volume. 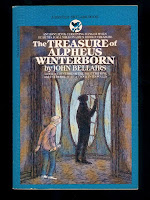 In this, the first of the Anthony Monday series, there are no supernatural happenings, but Anthony and his friend, the librarian Miss Eells must unravel a mystery in their town. In 1980, Bantam Books commissioned Edward Gorey to create a cover illustration for the paperback printing of this title.

Book 5, The Curse of the Blue Figurine, 1983, published by Dial Books for Young Readers, illustrated by Edward Gorey - My first edition copy of this title is inscribed by Mr. Bellairs to "Donny", wishing him a "Happy Hanukkah". This is my only volume signed by the author.

This book launches another new set of characters: Jonny Dixon and his friend the crabby, elderly, cake baking, Professor Childermass. This pairing will become the favorite of many fans of the series (including me). Professor Childermass is a character with more of an edge than many of Mr. Bellairs' other, more kindly creations.

In this return by Edward Gorey as illustrator, he begins the format he will employ throughout the remainder of the series. There is a big full color dustjacket painting and (usually) a frontis illustration. Sometimes there are spot illustrations which are dropped into the text, but the books are not fully illustrated. The frontis drawing for this title is a particularly nice.
Posted by ampootozote at 8:14 AM

I was so happy to find this blog. I discovered The Letter, The Witch, And The Ring as a very young child and as soon as I finished it I rushed to the library to check out more John Bellairs books. And as much as I love the books themselves, the artwork by Gorey was amazing and creepy and stuck with me for years, until I finally found the books to add to my collection as an adult. I am now 30 and still read these books every now and then when the mood strikes.