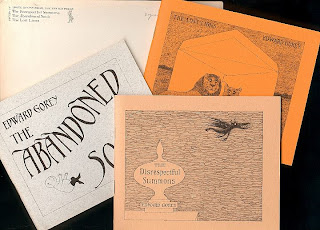 Published in 1973 by The Fantod Press, Edward Gorey's last installment of Three Books from Fantod Press once again gives us three individual books published concurrently and issued in a printed envelope. All three titles are limited to 500 unnumbered, unsigned copies and this time they are housed in a printed white envelope. There is also a special signed limited edition of 26 A-Z lettered copies which were issued in a special beige printed envelope. The books I am showing are from the edition of 500 copies and each book has been signed by Mr. Gorey. All three titles from this publication appear in Amphigorey Too. 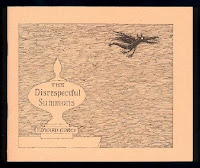 Miss Squill, the main character in The Disrespectful Summons is accosted by, and dances with the Devil. This exchange changes her life in ways she was not predestined to follow. This is my favorite of the three books presented here, and the volume has some wonderfully evil situations (and laugh out loud illustrations) which arise from Miss Squill's evil tendencies after her encounter with the Devil. Of course, one cannot be taken by the Devil without ending in the Flaming Pit, but at least Miss Squill seems to have enjoyed her wickedness, even if it was thrust upon her. 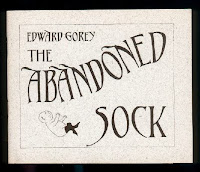 In The Abandoned Sock, Mr. Gorey once again gives life to an inanimate object. The sock is not so much abandoned, but rather finds that life in the wide world is not all that it had imagined it to be after it makes an unwise decision to remove itself from its mate. I have always felt the title of this volume to be misleading, since the sock itself makes the choice to leave. 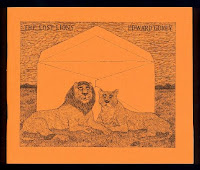 The Lost Lions, or, Having Opened the Wrong Envelope is a meandering tale of a hardy young man whose life is thrust in strange directions, beginning when he opens the mail one day and decides to follow the path set forth by the missive found therein. This leads to fame, a mental breakdown, and loss of purpose in his life.

All three books in this set revolve around a life altering choice. In The Disrespectful Summons, the choice is made by an outside force (the Devil). In The Abandoned Sock the sock leaves it mate, and the downward spiral begins. The protagonist of The Lost Lions chooses to follow a proposition set forth in a piece of mail, and from that day forward, finds that his life has lost focus. Being published as a set, these three volumes magnify how choices can adversely affect a whole lifetime.
Posted by ampootozote at 6:00 AM

I love your reviews of these books - thoughtful, humorous, and well-written.

I've just bought a Fantod Works box set and read some of these books for the first time. The Disrespectful Summons is terrific, as is The Lost Lions and the illustrations to both are simply gorgeous. However for the first time I have been disappointed with a Gorey book. The Abandoned Sock has a very slight story compared with the other two, but the art is a particular let down. It is in his 'minimalist' style which looks beautiful in other books but this time actually just appears unfinished!

Like any other author with over 100 books to his credit, some pieces will resonate with most readers, some with only a few. I was in despair in the early 1990's after the publication of The Pointless Book, The Floating Elephant/The Dancing Rock, and Figbash Acrobate.

I bought them feeling I was being fleeced because I had put myself into a position where I needed to buy everything that was published to keep my collection complete. After 20 years, I still feel that way about these particular titles.

you are absolutely right - a couple of duds among a hundred gems is a far higher success rate than most could hope for. But receiving those three titles in a row like that must have been perplexing. I haven't read them and probably never will because of the prices they now command - about $700 to buy all three on Abebooks. So at least you got in early!