In 1973, Edward Gorey began providing dust jacket designs and interior illustrations for a book series begun by John Bellairs. This series partnership would last beyond Mr. Bellairs' death in 1991, and continue through unfinished stories completed by Brad Strickland. Mr. Strickland then would go on to continue the series and write his own stories using characters created by JB. Mr. Gorey's contributions to the series ended with death in April 2000. The first book in the series is The House with a Clock in its Walls (1973), and the final Gorey-adorned title was The Beast Under the Wizard's Bridge, published in Fall 2000. 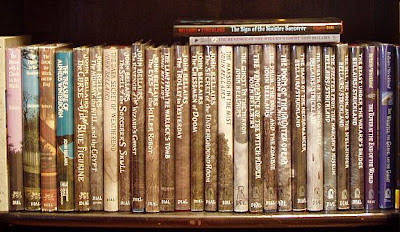 Edward Gorey did multiple book cover designs and illustrations for a host of authors including Joan Aiken, Sarah Caudwell, John Ciardi, Mary Rodgers, and the horror anthologies of Marvin Kaye, and Manley & Lewis. This series by John Bellairs, however, was the longest running series by an author(s) that Mr. Gorey was associated with. Over 27 years Mr. Gorey provided artwork for 22 of the 24 books in the series (Note: I realize that Mr. Gorey did not provide a dust jacket design for the hardcover versions of books 2, 3 & 4 from the series. He did provide a cover illustration for the paperback version of book #4, The Treasure of Alpheus Winterborn, so I include it in my count).

I came to the Bellairs stories through my interest in Edward Gorey, but I have heard that there are many Gorey fans who were first exposed to his artwork because of these books. I am going to take a leisurely approach showing the books/art in the series because there are many great images to be shown and discussed. In my next posting I will start at the beginning of the series and proceed from there. 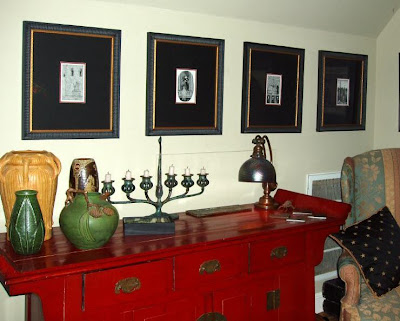 In 1994, Edward Gorey found that his home needed extensive repairs which could be put off no longer. To this end, EG decided to sell many of the original illustrations he had been commissioned to create for various projects and authors over the years ("A" Collection artwork was not sold). Gotham Book Mart offered the original art, which included many of the Bellairs illustrations. By this point in my Gorey collecting, I had "found" Mr. Bellairs and was collecting books from this series. When the artwork became available, I bought as many of the pieces as my budget would allow (and sometimes more than my budget could sustain!). Artwork from the Bellairs series forms a large part of my collection of Gorey originals. The top banner of my blog shows a piece of art created for the series, and the photo above shows a small sampling of my Gorey/Bellairs pieces which will be shown in later postings.
Posted by ampootozote at 6:00 AM

God, I loved these as a kid. Everything about this post is fabulous. The books and art especially, but even the buffet/sideboard!

Came to Gorey through Bellairs waaay back in the day when I picked up House With A Clock in its Walls, and now have a deep love for both their works. I love reading the books- they're like my mac and cheese and hot chocolate on a rainy day. Looking forward to seeing more on the art! especially because the few Bellairs books I have right now came in omnibuses, sans covers.

I find it unfortunate that the Gorey covers are not being used any longer, but at least the books are still in print! It is nice to see the frontis piece drawings still in place on most of the books.

I absolutely love Gorey. He's the reason I became an illustrator. My dad used to read his alphabets to me as bedtime stories.

your JB collection is wonderful. Only half of mine are dial hardcovers. ex library copies. the rest are paperback bantam skylarks however they do retain the artwork.