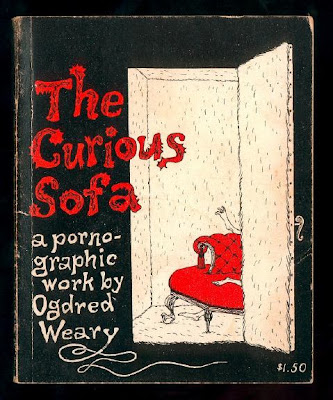 The Curious Sofa was Edward Gorey's third (and final) book published by Ivan Obo- lensky in 1961. As with the other two tiles from this pub- lisher, TCS is a paperback book that shows wear easily. TCS is the first Gorey volume which he publishes under an assumed name; Ogdred Weary (being an anagram for Edward Gorey). Over the years, Mr. Gorey would come up with numerous pen names based on the letters of his name. He seems to have been given just the right combination of 11 letters to make up far more names than one would have believed to be possible.

The Curious Sofa is subtitled A Pornographic Work, and what a work it is! At the beginning of the story, we find Alice eating grapes in the park when she is approached by Herbert. We follow Alice's adventures as she sets off on a whim with Herbert and encounters alfresco dining, well hung men and dogs, sympathetic women and it all ends (presumably badly) with her screaming in a polar bear fur lined room. Sex occurs from the first, and even though it is rampant, it is always just out of eye shot and never explicitly rendered. Gorey portrays Alice in every drawing holding or eating grapes.

One of the confusing things about TCS is that every copy of the first edition has a limitation statement printed on a fake colophon page stating that "this copy is no. 83 of an edition limited to 212 copies". I have heard it said that this was Edward Gorey's private joke because he did so many limited edition books, but in fact this book predates all of his signed/numbered/lettered/limited edition volumes, and is really foreshadowing for things to come over the next 39 years! By 1961 he had only published The Bug Book in a limited run of 600 copies, and this was for the private use of The Looking Glass Library.

All first edition copies of TCS have a printed price of $1.50 on the cover. When the price increased to $1.75, a price change sticker was put over the amount. Once again, I have several editions of this title in my collection. I have two 1st/1st's which are both signed, one being inscribed to me and the other being a very nice copy that was signed twice by EG, once as a (supposedly) forged signature and a second time signed in person by the man himself! 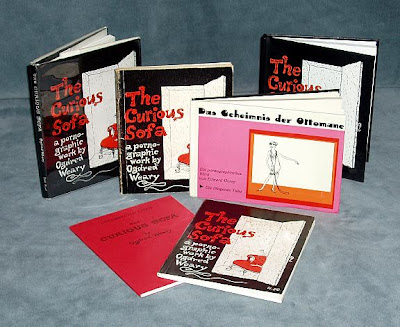 The first hardcover/DJ of this title was printed in 1980 by Dodd Mead Co., NY. My copy is signed. The second hardcover printing was produced by Hardcort Brace in 1989, and my copy of this reprint is also signed. In the picture above, I show the uncorrected Hardcort proof of this title in printed red wrappers. The final, psychedelic version of this title I show is the 1st Swiss edition in laminated boards. This title appears in Amphigorey and is currently in print once again.
Posted by ampootozote at 6:30 AM