After publishing three books with Obolensky in 1961, Edward Gorey moved to The Bobbs-Merrill Company, Inc. of Indianapolis/New York in 1962. The Willowdale Handcar is his first excursion with this new publisher, and the paperback book matches the Obolensky titles in general size and format. 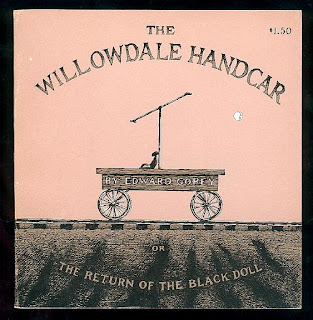 The Willowdale Handcar is a rather charming travel book with sinister undertones. Edna, Harry and Sam embark on a cross country excursion "one summer afternoon" by liberating a handcar from the Willowdale train station and setting out to see "if anything was doing". While hand pumping their way cross country (or state) on the railway handcar, we get glimpses of unusual happenings occurring to characters around them which are of course, the main story of the book.

This book has some of EG's more memorable place names including Bogus Corners, Chutney Falls, Peevish Gorge, Hiccupborro, and my personal favorite, Penetralia. The Crampton Vinegar Works, the Halfbath Methodist Church and the Weedhaven Laughing Academy are all places the trio stop at or pass by during their journey. 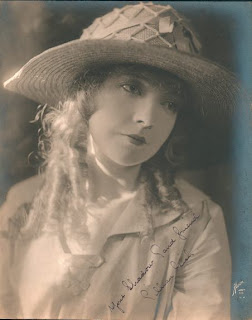 The entire story has a the feel of an epic silent film by D. W. Griffith and this book is appropriately dedicated to silent film actress Lillian Gish. Lillian Gish was born in 1893 and had her first film roll with Griffith in 1912. She continued acting well into her 90's, and died in 1993 at age 99. I had the good fortune to see Lillian Gish in person in the autumn of 1986 when she came to Minneapolis for Cinecon 22, a film convention which that year was dedicated to the memory of her sister, silent film actress Dorothy Gish. Introduced and prompted by Lenard Malton, Miss Gish talked about her sister, working with Griffith and finally introduced the film Orphans of the Storm, which had recently been restored at that time. I have a lovely vintage signed photograph of Lillian Gish in my collection.
Posted by ampootozote at 6:00 AM

Greetings from Hawaii. I just bought a signed copy of Edward's The Willowdale Handcar on eBay. You will be happy to know that it contains an inscription by Lillian Gish, dated March 15, 1984. John A Carollo

That is pretty amazing! I haven't run across a Gorey book like this one...congrats on the great find!

The book cover promises that discerning readers will discover a deeper meaning in the tale. Has anyone discovered the deeper meaning? I think there's a riddle in there or something. Perhaps I read "Gorey Games" too much as a child...

I bought my copy of The Willowdale Handcar this summer at the Edward Gorey House in Yarmouth Port, Cape Cod. I absolutely love this story. Every time I read it I discover something new. To me it speaks of connections between people, places and events, trivial and not-so- trivial, that give meaning to life.