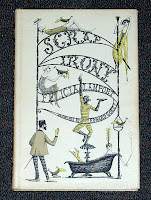 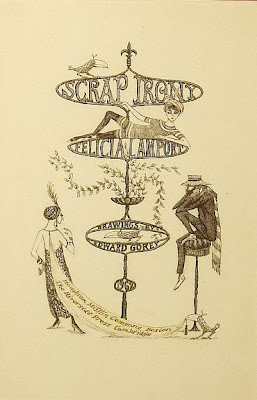 In 1985, I purchased my first three pieces of original Edward Gorey illustration art (the first in April, the second in August, and the third in September), thus beginning my Gorey art collection. In September of that year, I had the good fortune to be offered the original frontispiece/title page art from Scrap Irony (I will show the other two pieces in later postings since they are not from this book). After purchasing this piece of art, I was unable to purchase another piece of original art by Edward Gorey until 1993 - there just wasn't much original Gorey art being offered during this time.

One of the things I particularly like about this piece of artwork is that it includes a self portrait of Edward Gorey on the right side. I have been told that the woman on the left is a portrait of Felicia Lamport. For the second printing of the book, the date on the original drawing was changed by Mr. Gorey from 1961 to 1962. The publisher's information must have also changed for the second printing because there are remnants of a paste-up on the lettering on the scarf. The paste-up change had fallen off the drawing and was lost before I purchased the piece.

This piece of artwork, along with my first edition copy of the book, was included in the exhibit "Reading and Collecting Books, Minnesota Book Collectors" which was held from June 8 to August 11, 1996 in the Cargill Gallery at the Minneapolis Institute of Arts. This piece was also exhibited from April 17 to September 27, 1974 at Yale University as part of the exhibition "Phantasmagorey, The Work of Edward Gorey" and is listed in the catalog of the same name by Clifford Ross.
Posted by ampootozote at 7:09 AM

Terrific post. Can't wait to explore more. On our way to a Gorey exhibit at the Boston Athenæum.