In 1960, while still working at the Looking Glass Library, Edward Gorey once again changed publishers for his next book. The Fatal Lozenge is the first of three books that would be published by Ivan Obolensky, Inc. of New York. I have always liked the name of this publisher because it seemed as though it should be one of Mr. Gorey's character's names. 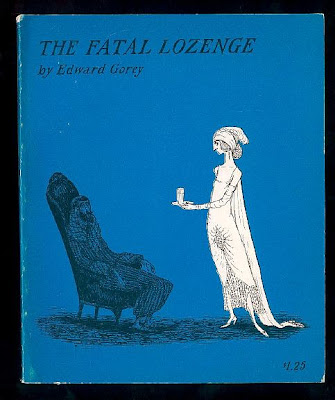 Gorey was quoted as stating he switched pub- lishers fairly often because he would be ap- proached and con- vinced by a new publisher that they could increase sales of his illustrated volumes. He said he would switch publishers and after publishing a book or two, they would let him go (or drop him) due to limited sales figures and the process would begin afresh.

The Fatal Lozenge is Edward Gorey's first published "alphabet book". Each letter of the alphabet is represented by a character which appears in a four line poem (Apparition, Baby, Cad, Drudge, etc.), each poem being accompanied by a single illustration. Apart from being in alphabetical order, the individual poems do not relate to each other, but rather each turn of the page reveals a new personage who is involved in some sordid activity or misfortune.

The first edition of The Fatal Lozenge was published as a small paperback volume with $1.25 printed on the cover. On the second printing of this book the price has changed to $1.75, but otherwise they are identical. 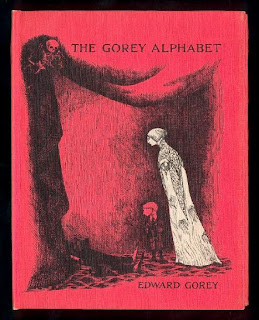 Because only the price has changed and no statement of a second printing appears inside the book, this is really a secondary binding and not a true second printing.

The Fatal Lozenge is another Gorey book that is hard to find in great condition since the dark blue of the cover was printed on white paper and over time becomes easily scuffed. This title is included in Amphigorey. Both my 1st/1st and secondary binding of The Fatal Lozenge are signed by Mr. Gorey and inscribed to me on the title page.

In 1961, an edition of The Fatal Lozenge was published in London under the Constable imprint. For the English first edition, the title was changed to The Gorey Alphabet and new cover art was created. The British first was printed as cloth hard cover book with no dust jacket and has shockingly pink covers! The cloth of this edition has a fairly rough texture to the weave, so it is surprising that Gorey's fine line work printed so well on the covers.
Posted by ampootozote at 6:00 AM