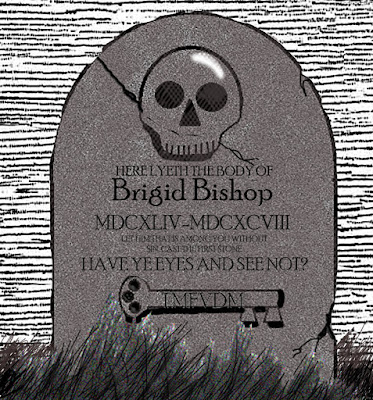 "Know all ye who enjoy mysteries: I have been asked to write some new Johnny Dixon novels. I'm about 40% through a first draft of the first novel, provisionally titled THE MAN WHO SUMMONED SHADOWS. I think I'm getting comfortable in good old Duston Heights once more. I'll do my best, my friends, so wish me luck.

(The artwork is by me, trying to imitate a certain great illustrator's traditional crosshatching)"

Brad Strickland is of course referring to Edward Gorey whose artwork graced 22 books in the Bellairs/Strickland series. Mr. Stickland was chosen to continue the popular book series after John Belliars passing.

Posted by ampootozote at 4:58 AM No comments: 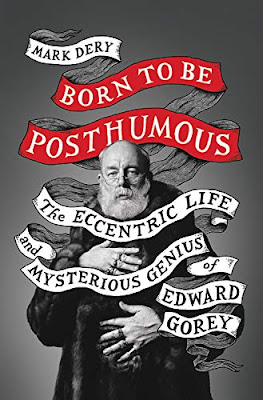 Born To Be Posthumous, Mark Dery's seminal biography of Edward Gorey caused a stir when it was published in 2018, so it is somewhat surprising that The London Review of Books has taken three years to publish a review. You can read the review HERE.

Posted by ampootozote at 6:53 AM No comments: 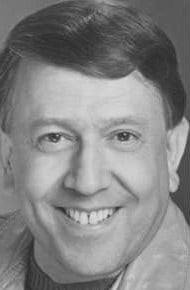 Mystery author and editor Marvin Kaye died on May 13, 2021 at the age of 83. Edward Gorey created wraparound dust jacket cover designs for eight of the numerous anthologies Kaye produced. 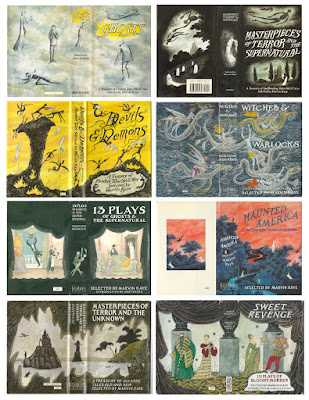 Posted by ampootozote at 6:50 PM No comments: 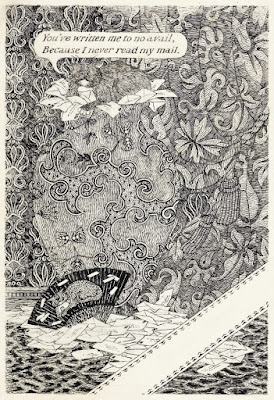 Swann's Illustration Art sale in June will include the fantastic postcard image shown above.

Posted by ampootozote at 7:31 AM No comments:

Ashcroft and Moore's The Great Gotham Gorey Collection auction was held on April 1, 2021 and offered many interesting items. Books, posters, t-shirts, and detritus from the long closed bookstore were embraced with spirited bidding. One of the most interesting lots was a collection of 45 Q.R.V. themed pinback style button magnets (one extra non-matching piece included in the lot was a Boston City Opera magnet). Researching these buttons, it became obvious that Edward Gorey created these himself and that the background color for each was hand painted by Mr. Gorey.

The lot consisted of multiple copies of 12 different Q.R.V. designs mounted to metal pinbacks. Three of the designs are represented with examples in gold, bronze, or silver. Five designs appear with gold and silver while the remaining four designs had only one background color present. Were these tests for a promotional item or perhaps a hand made object like the Figbash dolls that Mr. Gorey intended to include with the deluxe edition of the book? The answer can be found by going back 20 years to the 2001 catalog of rare and unusual Edward Gorey items sold by Bromer Booksellers. 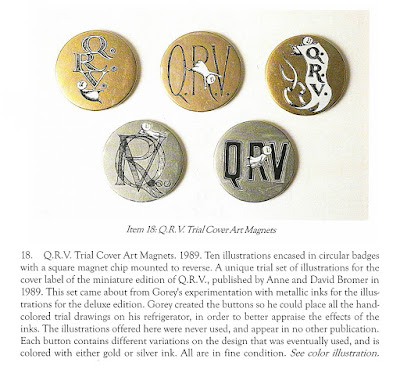 Anne Bromer is a Boston based bookseller who was also a long time purveyor, promoter, publisher and friend of Edward Gorey. Bromer published two miniature books by Edward Gorey - The Eclectic Abecedarium in 1983 and Q.R.V. in 1989. While visiting Mr. Gorey at his home, Ms. Bromer acquired a set of ten handmade refrigerator magnets, each bearing the initials Q.R.V., a small child, and often a banner. Mr. Gorey informed Ms. Bromer that he made them so he could visualize different designs and colors for the cover of the miniature book. Mr. Gorey told her at the time that he had created two sets of the button magnets - presumably one with gold backgrounds and the other in silver (the examples with bronze colored backgrounds are the least successfully painted examples). Mr. Gorey did not indicate at the time that there were in fact twelve different images or that he had made many more examples. The set of ten button magnets were taken off the front of Mr. Gorey's refrigerator and went home with Ms. Bromer.

After his passing in April 2000, Ms. Bromer decided it was time to part with her extensive Gorey collection and her set of refrigerator button magnets were sold through the catalog. Until the recent auction, only Andreas Brown was aware that Edward Gorey had created a total of 55 buttons - the original 10 that Anne Bromer acquired and the remaining 45 that Mr. Brown had in his store hold of rare and unusual items by Mr. Gorey.

The Edward Gorey Charitable Trust has been diligently organizing the thousands of items in the Gorey Archive. By coincidence, a sheet with original artwork for four of the button magnets was just recently located. One drawing is shown here (artwork 1.8" x 2"). To see the other three designs on the sheet, follow The Edward Gorey Charitable Trust on Instagram and Facebook.

Posted by ampootozote at 5:45 AM No comments:

Here at Goreyana, we have been discussing Edward Gorey's career as a fine art printmaker over the course of many years. Two previously unrecorded etchings by Mr. Gorey were sold recently at an auction of material from the inventory of The Gotham Book Mart which closed in 2007. Both of these etchings are unsigned and it is presumed these test prints are one of a kind examples with no other copies known. See my posts for Fine Art Prints - Part 15 and Part 16 for other one of a kind test prints. 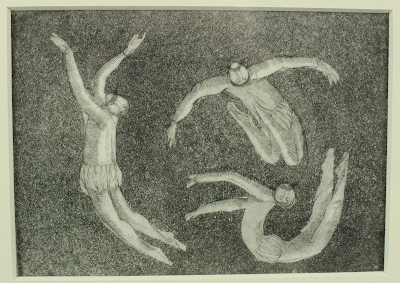 The first etching shows three circus tumblers contorting in midair. This is a joyful image with a sense of whimsy about it. One of the interesting things to note is that, because the print is unsigned, there is no way to know precisely which direction Edward Gorey intended it to be oriented. The print was framed by The Gotham Book Mart as shown above, but any side could be up and the print would still look correct. 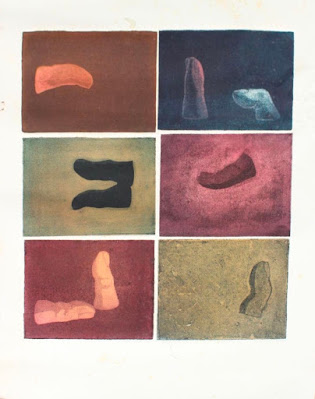 The second print sold at the auction is quite unique. It is the only known etching in Mr. Gorey's thumb series that is presented in color (he created three colored elephant prints, but they are single color prints). It is also the only print he made using multiple images collected on one page to create a window effect. The paper for this print is 15" x 22", making it the largest etching created by Mr. Gorey 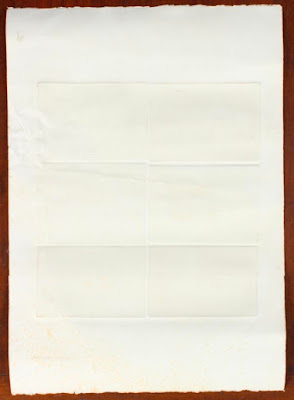 As can be seen by the indentations on the reverse of the paper, the image was created using six individual printing plates. Each image is printed in three colors - three of the images are fairly obvious while the other three have the third color subtly applied. This would require infinite patience and meticulous planning.
Each of the six plates would be prepared for printing, then the ink would be applied by hand with a roller. All six plates would then be aligned on the table of the press. The paper would be positioned, and the print would go through the press. The paper would be removed so the ink could dry, the ink cleaned off each of the six plates, and Mr. Gorey would alter the drawing on the surface of each plate. The process would start again, re-etching the plates, inking the colors, aligning the plates and paper and running it through the press. The process would start all over again for the third color. The edges of each image are slightly "soft" because no matter how careful he would have been, the plates would never perfectly align from one color to the next. This gives an appropriately atmospheric quality to these images.
To create this type of print, Mr. Gorey would start with the lightest and brightest color in each image. Each time he reprocessed the plate, he would have to add a resist to the areas that he wanted to stay bright and clean so the new color of ink would not "take". He would also draw new details onto the plate for each successive color. Unless Mr. Gorey printed more than one copy of this image, the finished print as shown will be the only example that will ever be possible to create from the plates, because the plates were permanently modified as the print progressed.
Posted by ampootozote at 2:13 PM No comments:

Are you longing for 465 Edward Gorey designed pin back buttons (109 English Soup buttons shown above)? How about 203 Gorey rubber stamps (some used), or for the true fanatic - 1645 I Saw Dracula T-Shirts in several sizes.

Collectors are prone to hoarding items that we love both as individual objects and occasionally single items in quantity. Both of these collecting interests will be well satisfied at The Great Gotham Gorey Collection auction at Ashcroft and Moore Auction Gallery on April 1. The Gotham Book Mart closed in 2007 and the items in this auction were store inventory that was packed away at that time. There are many unusual promotional posters and (literally) piles of books. To view the items, visit their website or view pieces on Live Auctioneers.

Posted by ampootozote at 7:09 AM No comments: