Ok...I know this isn't strictly Edward Gorey related, but I had to share it with everyone. While walking our dogs this evening we came across this totally unique lawn decoration about a block from our house. It made us both laugh out loud and we wanted to get a photo before something happened to it. Happy Halloween!! 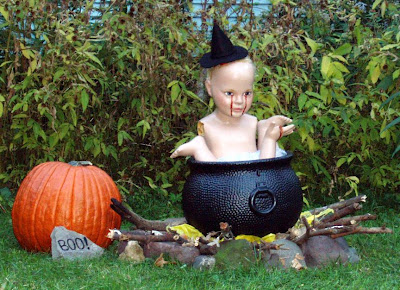 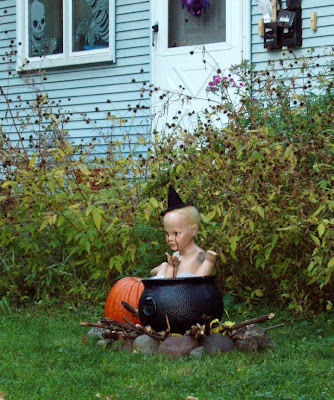 Posted by ampootozote at 4:46 PM 2 comments:

The Ghost in the Mirror

The Ghost in the Mirror was the first John Bellairs story to be completed by Brad Strickland. Published in 1993 by Dial Books for Young Readers, The Ghost in the Mirror returns Lewis Barnavelt, Uncle Jonathan, Mrs. Zimmerman and Rose Rita Pottinger to the book series after a long absence. The story of how Brad Strickland came to work on, and eventually continue the Bellairs books is detailed on www.belairsia.com in the bibliography section. 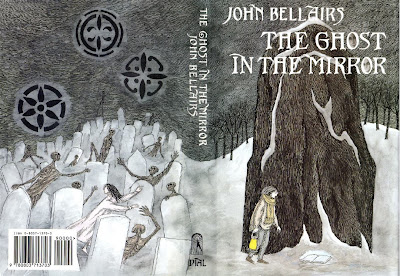 Edward Gorey created the artwork for the dust jacket and the frontis illustration for this title. Mr. Strickland's name does not appear on the dust jacket because the cover art was completed and printed before Mr. Bellairs passed away, so "Completed by Brad Strickland" only appears on the title page. 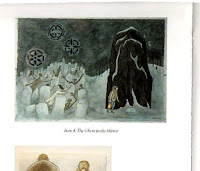 This piece of original art by Edward Gorey is a masterpiece of suspense and terror. If you did not know that it was a piece of dust jacket artwork, you would view it as a wonderfully creepy painting by Mr. Gorey. Barely visible on the printed dust jacket are two faces which appear on the front cover inside the "O" of Ghost and Mirror. They can be seen a bit more clearly floating in the sky on the original art.

The dust jacket painting was included in Bromer Booksellers 2001 catalog of Gorey items. The hand-lettered type for the cover/spine was included as a separate piece of art. I am not aware of the frontis drawing being available from Bromer or Gotham Book Mart.
Posted by ampootozote at 6:00 AM 2 comments: 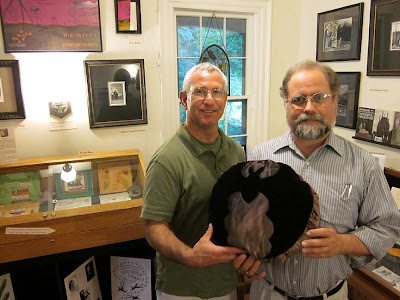 After my posting on August 22, 2010, the folks at the Edward Gorey House were kind enough to find the pillow I showed in my posting and forward a better photo for everyone to see. Standing in the gallery, Assistant Director Duncan Gibson (on the right) and his partner Morgan are shown holding the pillow for a better view. This photo also gives a glimpse of the current exhibition and shows just how many wonderful books, artwork and objects are on display.

While taking another look at my previous posting/photo, I realized that I forgot to point out that Director Rick Jones is thumbing through a sketchbook of rough sketches for the pillows (click on the photo to enlarge). This is a good example of each step of the working methods Edward Gorey went through for this stage production. The first step was to sketch and jot down notes on his ideas in a notebook. The second step was to refine and define his ideas into a finished piece of art which was given to the theater's set crew. The final step was to use the drawings to create the life sized sets and set decorations.
Posted by ampootozote at 6:46 AM 2 comments:

The Grand Passion & The Doleful Domesticity

Edward Gorey's The Grand Passion and The Doleful Domesticity were published in 1992 by the Fantod Press. The Doleful Domesticity was first printed in the Yale Review in the Summer of 1991, and the cover has black printing on hot pink card stock (which my scanner shows as white in the photo below). The Grand Passion appeared in The New York Times Magazine in June 1976, and was included in Amphigorey Also. The cover has black printing on yellow card stock. 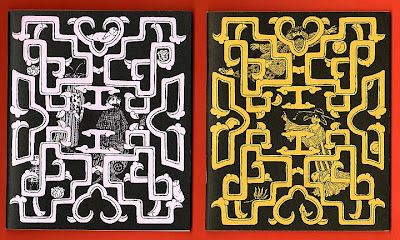 The two books were issued together as a signed, numbered, limited edition of 500 sets in a printed envelope (see below) and were not sold individually. Each pair of books has the same limitation number. I am showing copies #212/500. The announcement card used to promote this publication is shown at the bottom of the posting.

The Grand Passion is an operatic tale featuring a caricature Oriental couple which could have stepped straight out of Gilbert & Sullivan's The Mikado. In 1983, Mr. Gorey created sets and costumes for a production of The Mikado which was presented at Carnegie Mellon University.

In The Doleful Domesticity, what appears to be the same couple are moving house with their baby and young child. Both of these tales are wonderfully disjointed in the best Edward Gorey fashion.
Posted by ampootozote at 6:00 PM No comments: