Following the first three prints released posthumously by Gotham Book Mart in 2003 (see previous post), the Edward Gorey House took over the publication and sale of these unique images beginning in 2004.

The House revived the official numbering sequence for prints, and the Posthumous Prints are numbers 201 through 214. The first three Posthumous Prints issued by GBM are not included on the list, so currently there are a total of 17 etchings that were printed after Edward Gorey's death.

The prints shown are available for purchase from The Edward Gorey House. Because of the quantity of prints, I am breaking them into two postings. With one exception, the etchings shown were created in editions of 99 numbered and 26 lettered prints. Print #212 was produced by Gotham Book Mart and has 99 numbered, but no lettered prints in the edition. Each print is numbered in pencil by hand and is "signed" with an embossed signature.

The first three prints are a continuation of Mr. Gorey's enigmatic Thumb series.
#201 - 1 Thumb Up 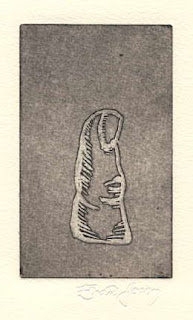 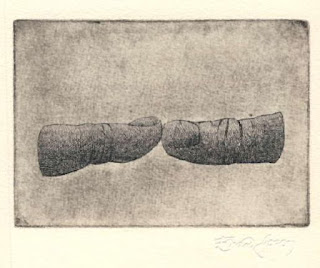 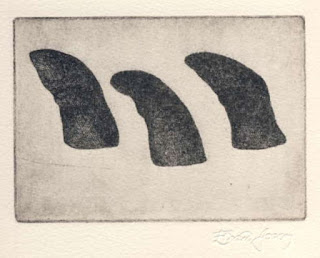 The following five prints can be ordered from The House individually or as a set of five at a reduced price. When ordered as a set, the prints will all have the same number. My set is #99/99. I really enjoy the whimsy of these images.
#204 - Bolster on Branch 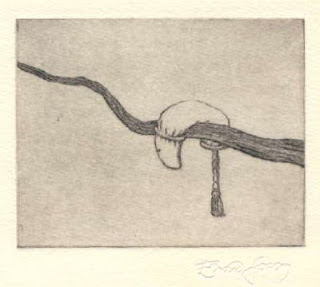 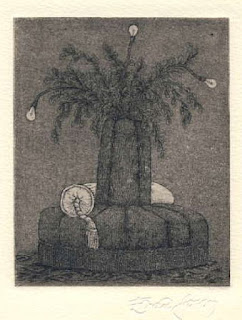 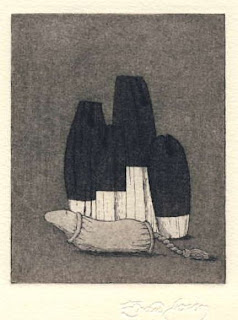 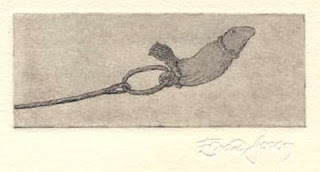 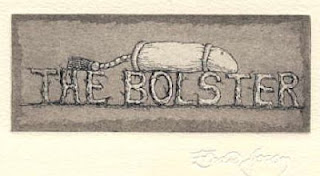 Posted by ampootozote at 6:08 AM No comments:

In previous posts, I have shown all of the Fine Art Etchings printed by Edward Gorey during his lifetime. After Mr. Gorey's death, it was discovered that there were additional etching plates which were finished, but had not yet been printed. These 17 images constitute The Posthumous Prints. Each of these prints is numbered by hand in pencil and signed with an embossed artist's signature.

In 2003, the Gotham Book Mart took three of the previously unprinted plates and created runs from each image. These are difficult prints to locate today because the runs have sold out, and are only available on the secondary market.

Boy on Aspic Holding Hat Aloft; Edition size - 99 prints. I am showing #99/99. This is either a very small boy, or a very large aspic. 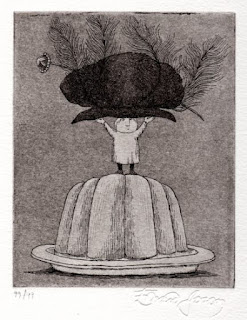 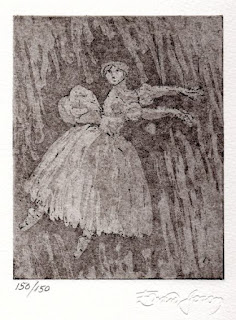 A Spectral Child Appears Before the Big Cat; Edition size - 50 prints. I am showing #13/50. This is an atmospheric image, with both the cat and boy fading into the background.

I will show the other Posthumous Prints in a later post.
Posted by ampootozote at 6:00 PM 1 comment:

The Mourning Fan, or Meanwhile and Elsewhere is a delightful, if little known work by Edward Gorey. It appeared in Antaeus, 20th Anniversary Issue, No 64/65, Spring-Autumn, 1990. This literary quarterly ran from 1970 through 1994, and included written contributions by a variety of authors. Works by Edward Gorey have appeared in several issues.

To date, The Mourning Fan has not been published as an individual book. The story consists of thirty verses, each accompanied by a small fan shaped drawing. The size of the drawings are similar to The Eclectic Abecedarium and Q.R.V., and it could be guessed that this title was destined to become a third miniature offering from Mr. Gorey. The surprise of the story is somewhat diminished in this printing because the layout allows the reader to see all the drawings and verses on four pages. I look forward to the possibility of seeing this title printed as an individual book one day.

Posted by ampootozote at 6:00 PM 5 comments: