The Mansion in the Mist 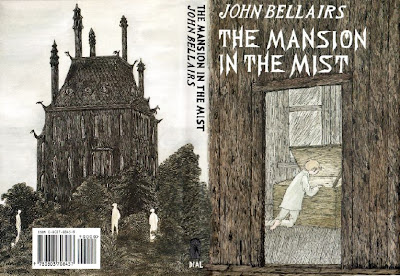 The Mansion in the Mist by John Bellairs features a wrap around dust jacket design and a frontis illustration by Edward Gorey. Published in 1992 by Dial Books for Young Readers, this is the fourth (and final) outing for Anthony Monday and Miss Eells. This title was also the last to be written completely by Mr. Bellairs before his death on March 8, 1991. At the request of the estate, subsequent titles from this series have been completed, expanded, or completely written by Brad Strickland.

Edward Gorey created a dust jacket design for this title that has a definite front and back which does not blend seamlessly. Because of this, the art from this title was cut in half and the two sections were sold separately by Gotham Book Mart in the mid 1990's. The rear portion of this art (the mansion) sold on eBay in July 2000 along with two other pieces of original Edward Gorey artwork. I was bidding (and won the auction) on one of the other pieces of art.
Posted by ampootozote at 6:42 AM 3 comments:

There has been a lot of cleaning going on at our house lately, and in the course of things Bill has been finding some interesting tidbits...and reminders of "things that got away"... 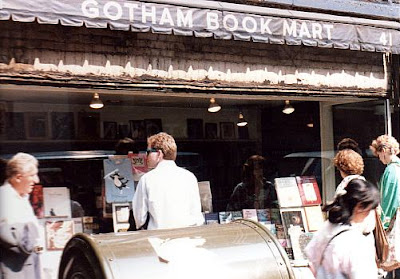 In 1986, Bill, myself and a friend went to New York City for a vacation. On this trip, we took many photos (a practice we have to get back in the habit of doing). This turned out to be one of our more eventful trips to NYC for many reasons, but I will stick to the Edward Gorey story for this posting.

Among the places we visited was The Gotham Book Mart in the Diamond District. In the photo above, Bill is central outside the shop window which was displaying Gorey Books and posters. The long familiar sign hung over the entrance to greet visitors. No visit to GBM was complete without a trip to the second floor gallery, especially when there was an Edward Gorey exhibition on display. To my great surprise, there were several pieces of original artwork being offered for sale. To my great disappointment, I could not afford any of the pieces at that time.

I was allowed to take a couple photos of the art offerings, and Bill ran across these pictures while cleaning. Available were three pillow designs from the set of the Broadway production of Dracula and a two part drawing from Three Ladies Beside the Sea (photo below, see my posting from January 5, 2009 for more on this book). I do not remember what the Three Ladies art was priced at, but I do remember that the pillow sketches were $400.00 each which was too rich for my pocketbook at the time.

In 2006, Bill and I visited the Edward Gorey House museum about a week before the Dracula exhibition opened. One of the items we were able to preview while visiting was a pillow from the set of the stage play. I held the pillow up (see the photo below with Gorey House Director Rick Jones) and Bill snapped a photo. Referencing the 1986 photo with the photo taken 20 years later, the pillow that was on display is one of the three designs that I saw at GBM! Now, if I only had more money back then... 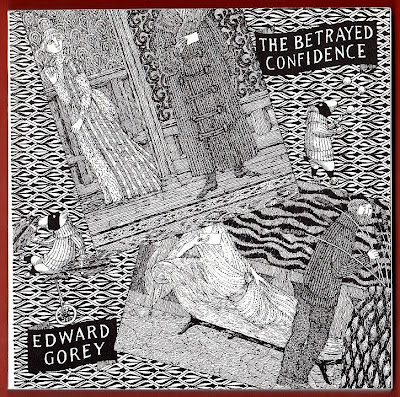 My trade copy is signed by Mr. Gorey on the title page. To the right is the front and back of the announcement card for this book.

Even though this is book is made up of reprints of seven postcard sets from 1976 through 1990, Mr. Gorey did create new illustrations for the front cover, rear cover and the frontis page. There is also a new title illustration for the Scene de Ballet Postcards images which was not part of the original publication (see my posting from August 29, 2009). 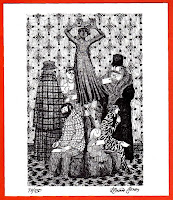 In addition to the standard trade printing, The Betrayed Confidence was issued in a slipcased limited edition of 250 signed, numbered copies. The printing of the book was the same as the trade edition, with an additional colophon/limitation page tipped into the back of the book. The limited edition also included a loose limited edition print which was created especially for this edition (see photo to the left). The print is signed and numbered, and the numbering matches the number of the book. I am showing copy #73/250.
Posted by ampootozote at 6:00 PM No comments:

The 1990's were the last decade of Edward Gorey's life - he died in April 2000 at the age of 75. During this time, Mr. Gorey found he had more demands on his time, attentions, and energies because of a growing popularity and interest in his work. His fan base was larger than ever, and this new found popularity resulted in a real push for new work. 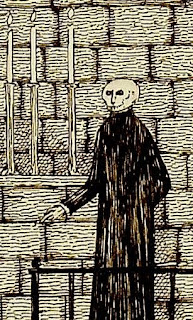 Edward Gorey was a man who disliked saying "No" to people, hoping if he was moderately non-committal the proposals could linger while he got along with the projects he was genuinely interested in. One result of the added interest and intrusion to his life, was that the quality and quantity of his "A" collection works from this time period became increasingly minimalistic and, (in my opinion) they pale when compared to his earlier works. His best illustration work during this decade was created for commission projects and not for his own books.

During this decade, Mr. Gorey also shifted his focus from writing and illustrating books to writing, producing, directing, and sometimes performing in local theatrical productions at small theaters near his home in Cape Cod, MA. He often incorporated puppetry into his shows and made the hand puppets himself. Each of these shows had sets and costumes designed by Mr. Gorey and often had programs, posters, announcement cards, mugs and buttons featuring new artwork. This was the work he really enjoyed at the time, and he seemed content to let his illustration work take a back seat to his theater work.
Posted by ampootozote at 6:00 AM No comments:

La Balade Troublante was published by Edward Gorey though his Fantod Press imprint in 1991. The book was printed as a small paperback. The copy I am showing is signed by Mr. Gorey on the title page.

This book is Mr. Gorey's only primary publication for 1991. The intention must have been to publish this title as a miniature book since the format of all the drawings is concurrent with the art created for The Eclectic Abecedarium and Q.R.V. (see my postings from January 28, 2010 & April 24, 2010 for information on these titles). The illustrations for this title read more as an idea sketchbook than as fully realized illustrations. The black & white drawings are all minimalist stick figures (like the illustration on the cover).
Posted by ampootozote at 6:41 AM No comments: 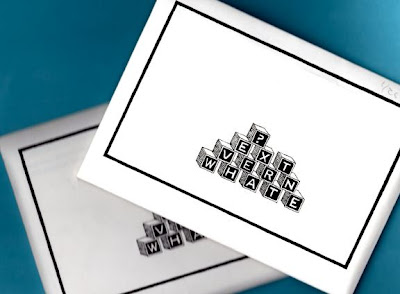 Dogear Wryde Postcards: Whatever Next? Series was published by Edward Gorey in 1990. No publisher is listed. Issued in a printed white envelope, this postcard set includes 12 cards and a separate colophon/limitation card. The images on the cards show objects in backgrounds and are not captioned. The illustrations are included in The Betrayed Confidence. 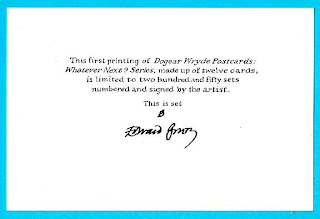 Whatever Next? was issued in a signed, limited edition of 250 numbered and 26 lettered sets. I am showing sets #B/26 (lettered) and #173/250. Interestingly, the colophon page does not mention the 26 lettered copies. One can assume from this that the lettered copies were an afterthought and not originally intended as part of the limitation. Mr. Gorey has also signed his name, and not that of Dogear Wryde.

This set of postcards leaves me distinctly underwhelmed. The images are nicely drawn, but I do not really find them very intriguing.
Posted by ampootozote at 6:00 PM No comments: