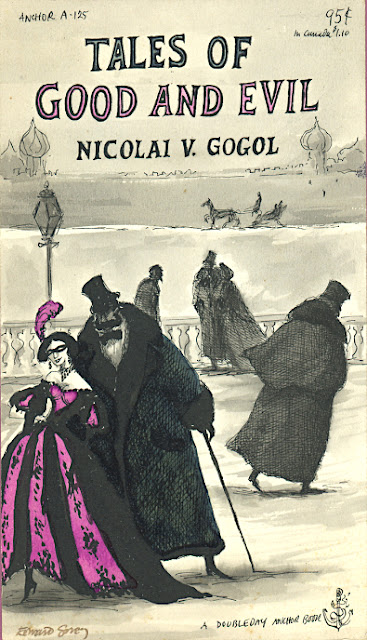 At the end of August, Nate Sanders Auctions in Los Angeles sold two original watercolor paintings by Edward Gorey. The first piece was an unpublished work from the early 1950's (see my post from August 30, 2020). The second painting is the preliminary cover art sketch for Tales of Good and Evil by Nicolai V. Gogol, published by Anchor Books in 1957. This piece sold for over $16,000.00 (including buyer's premium).

At first glance, the original artwork (above) and the printed book cover (below) appear to be the same piece of artwork, but they are two versions of the same cover design. This initial confusion is a testament to how thorough and precise Edward Gorey could be when mapping out his ideas and then redrawing/painting them for the final piece.

In the original artwork, the watercolor washes are expressively painted with bold brush strokes. The line quality of the crosshatched areas appears conversational and casual, applied with a lightness that attests to the quick movement of the pen strokes. The typography is completely indicated and correct but has a loose, carefree appearance, some of it even looking like a scribble. Even though the scene depicted is menacing and the landscape treacherous, the original art has a freshness and openness that draws one into the piece. 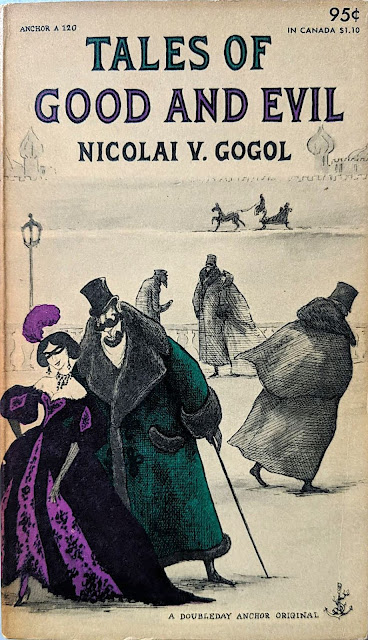 The final artwork, as shown on the book cover, is more controlled than the sketch. All the elements are precisely intact, but the line work has been tightened up and the watercolor washes appear intentionally less expressive. Even though the final image is more technically coherent, it lacks some of the carefree freshness of the sketch. The lightness of strong horizontal path with the horse and sleigh gives the impression that the paperback book cover has been folded. The precision of the final version highlights the tension in the scene, making the playfulness of the woman more acute and her fate more disturbing. Hopefully, the Femme Fatale with her exposed flesh and open shouldered ball gown will soon be returning indoors. Everyone else in the scene is considerably muffled up against the elements.

Posted by ampootozote at 8:09 PM No comments: 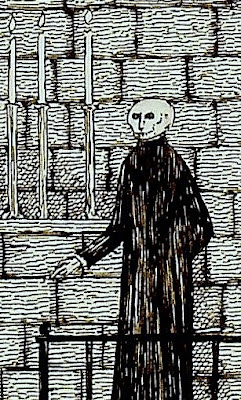 On October 5, 2008 I began this blog about all things Edward Gorey as a way to reconnect with my collection and to share information and stories that I had picked up over the years.

The Gotham Book Mart had closed in 2007 and with that closing, a major source of information about Edward Gorey and his works had ceased to exist. GBM had never embraced the internet and it was difficult to find accurate information about his works, so I felt there was an informational void that I could possibly help fill.

Over the past 12 years, I have been continually delighted and honored by the number of people who have written to tell me that they found helpful information in my blog posts.

Thank you for checking out my blog posts and offering your insights and comments. I look forward to the beginning of year 13 of Goreyana and to celebrating the life and works of Edward Gorey.

Posted by ampootozote at 6:55 AM 4 comments: