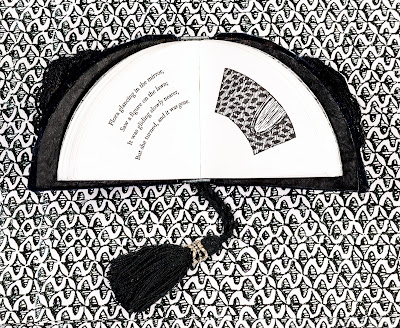 The Mourning Fan, or Meanwhile and Elsewhere is a little known book by Edward Gorey that until now has only appeared in the literary omnibus Antaeus in1990. The story consists of thirty verses, each accompanied by a small fan shaped drawing. The book was intended to be Mr. Gorey's third miniature book, but was never published as a stand alone volume in his lifetime. 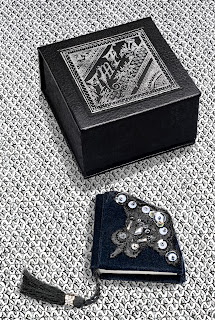 Aredian Press has issued the of The Mourning Fan in a Deluxe Miniature Limited Edition of 26 copies (lettered A-Z), plus 3 out of sequence copies. Each meticulously crafted book is hand made and comes housed in a custom clam shell box. These exquisite volumes feature individualized touches to the beading on the covers, making each copy in the series unique.

The book has been beautifully produced, with the type for each of the verses set to mimic the fan shaped illustrations. For more information about this special edition, go to: https://aredian.co/work/#press

Posted by ampootozote at 6:37 AM No comments: 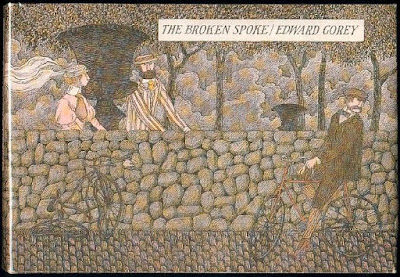 The Broken Spoke by Edward Gorey was published in 1976 by Dodd, Mead and Co. Before its publication, selections from the book's 30 drawings were published as a six page spread in the June 1976 issue of Sports Illustrated magazine. 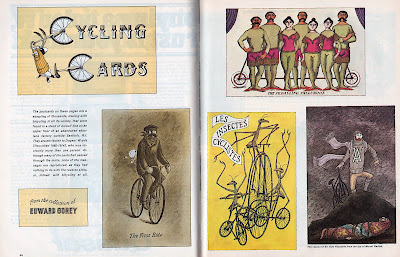 For the 1979 exhibition, Edward Gorey decided to offer artwork from The Broken Spoke rather than create new works specifically for the gallery show. After the exhibition, unsold Broken Spoke pieces
remained in his archive until the art was sold by Gotham Book Mart in the early 2000's.

All of the images created for The Broken Spoke depict various aspects of bicycles and cycling. The conceit of the project is that all of the images are postcards supposedly drawn by Dogear Wryde, the nom de plume Mr. Gorey used when creating post card images. 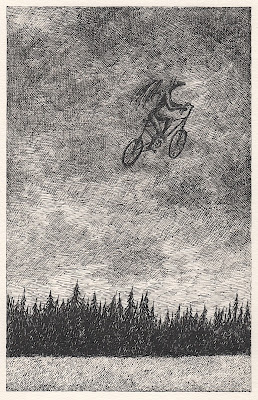 A recent addition to my collection is a piece of original artwork from The Broken Spoke. This skillfully rendered piece is titled, "Apparition of demon cyclist that appeared in the sky over Gasket, Maine several times during the second week in November, 1911". Edward Gorey would often sign, but not date illustration art for his commercial work. When Mr. Gorey did date his work, it is an indication that the piece was created for one of his own publications. At first glance, the dates are cryptic until one figures out his dating system.

Written on the back side of the art in the lower right hand corner, the day of the month is followed by a Roman Numeral to indicate the month, which is then followed by the year. There are two dates present to indicate the date the drawing was begun and the date it was completed. This piece was drawn on April 7, 1976. When Edward Gorey was working on a book, he would often complete two or three complicated drawings in a single day. 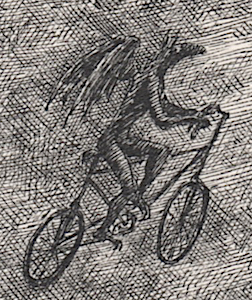 Edward Gorey had a special talent for creating atmosphere in his black and white illustrations through the skillful manipulation of thousands of fine lines. Against a turbulent sky the winged demon is seen riding a bicycle in the manner of Miss Gultch from the movie The Wizard of Oz. Barely visible in reproductions is the demon's eye, which is a single white dot the size of a pin prick. This delicate drawing is a master class in the art of crosshatching.