Gorey Collection at The Library of Congress 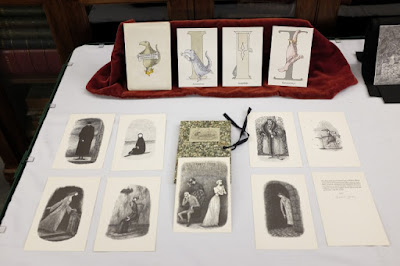 "What are you going to do with all your stuff?" I have heard this question from friends, fellow collectors, and even people who come to my home to do repair work. This is a question that is posed to all collectors eventually. My response always begins, "I am still enjoying it on a daily basis." From there, the answer gets vague.

Over the past several years, a number of major Edward Gorey collections have transitioned away from the collectors who passionately and painstakingly acquired the mountains of books, ephemera, and artwork. Some have been sold through dealers or at auction, but there has also been a significant number of collections which have been donated to institutions or libraries.

The Secret Lives of Edward Gorey 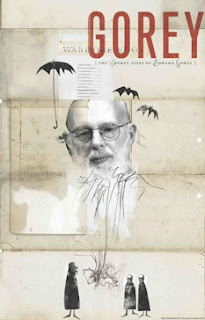 A new theatrical production, The Secret Lives of Edward Gorey will be mounted by The Life Jacket Theater Company in NYC at the end of April. For more information on the production, performance schedule and ticket information, go HERE.

Posted by ampootozote at 9:30 AM No comments: 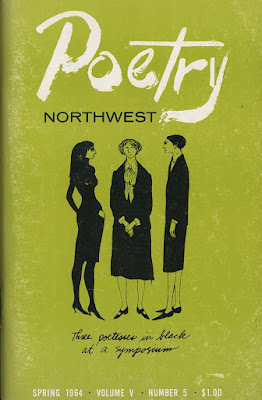 Poetry Northwest is a quarterly publication from the University of Washington, Seattle which was first published in 1960. The Spring 1964 issue featured a cover image and four interior illustrations by Edward Gorey. This issue only includes poems by women, and Mr. Gorey contributes with images of poetess' executed with his typical wit and charm. Each of the drawings includes a hand lettered description.  The cover illustration shows, "Three poetesses in black at a symposium". 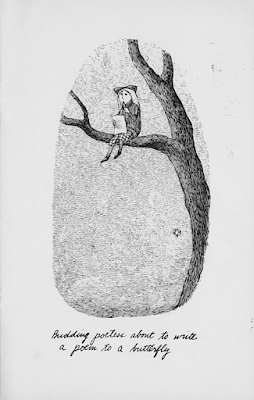 The first interior illustration on page 25 shows a, "Budding poetess about to write a poem to a butterfly". 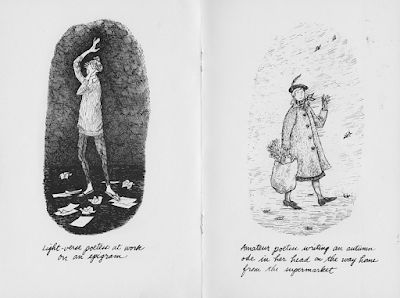 Next we have, "Light-verse poetess at work on an epigram". This is followed by, "Amateur poetess writing an autumn ode in her head on the way home from the supermarket'. 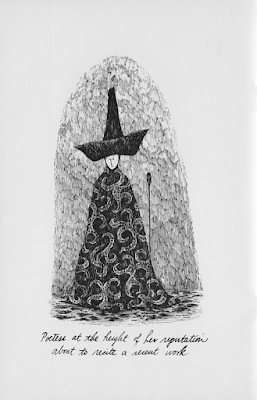 The final image is my favorite, "Poetess at the height of her reputation about to recite a recent work".

My thanks go to a reader of this blog who provided me with better scans than I had available.

Posted by ampootozote at 2:43 PM No comments: 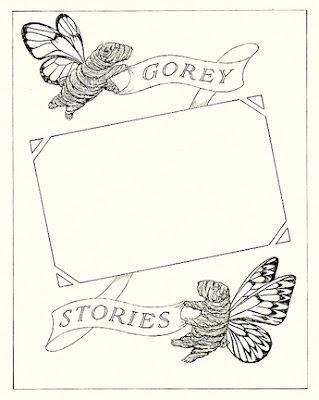 The Broadway production of Gorey Stories opened and closed on October 30, 1978 after playing only 15 preview performances. When a show never gets off the ground, there is usually very little interest in saving the material used to create the production. Fortunately, Edward Gorey tended to save everything.

In January, Swann Auction Galleries sold a piece of original artwork used in the creation of the Playbill program cover for the production. Apart from being a rare survivor from the ill fated show, the piece of art is of interest because it is a record showing how much Edward  Gorey orchestrated every detail of the final printed piece.

While working for Anchor Books in the 1950's, Edward Gorey was involved in every aspect of the process of creating books, posters and printed materials. Because of this training, Mr. Gorey became well versed in the quirks and intricacies of the printing process and began his habit of creating artwork at the size it was to be printed, a step that eliminated much guesswork from the process. 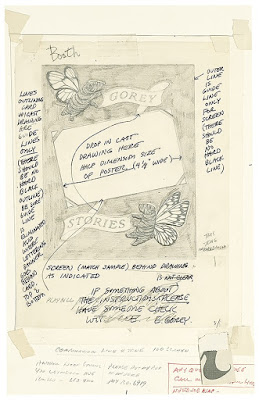 On the piece of original artwork sold at Swann, two Shar Pei dogs with butterfly wings are holding a title banner for the production which is fluttering behind a "photograph" of the cast. Mr. Gorey created a separate piece of artwork showing the cast (a photostat of this piece of art was included with the lot) which he had already created for the poster. The tissue overlay on the Playbill cover artwork gives highly detailed directions, indicating which lines are to be printed and which are guides for a fill color. A Pantone color swatch is also attached to the overlay. He even puts a note to say that he is to be contacted directly if the printer is unclear on the directions.

The overlay instructions show the thought process for the cover as well as Edward Gorey's ability to visualize the finished piece through the combination of several pieces of art, all of which are joined together in the printing process within the framework of the standard Playbill cover. Today, of course, this is type of work is done on computers, but in 1978 the process was a more hands-on, leap of faith endeavor.


Posted by ampootozote at 9:14 PM No comments: