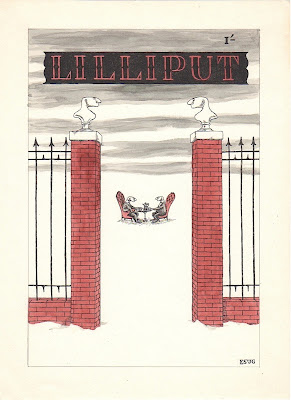 Edward Gorey created a total of three cover images for Lilliput Magazine around 1948/1950 and each is signed with Mr. Gorey's early form of initial signature, "EStJG" in block letters. I previously wrote about the two other pieces created for this magazine (see my post from July 9, 2011 & April 15, 2013). It is unclear if they were ever sent to the magazine itself or if Mr. Gorey created them as examples of his work for exhibition.

Mr. Gorey obviously intended all three pieces to be viewed as covers (or potential cover designs) for the magazine. The name is boldly featured in each composition and two of the three have the price indicated in the upper right hand corner of the paintings.

This third Lilliput cover painting again shows a sophisticated use of white space in the composition of the image. Foreground, middle and far depth is achieved simply and economically with the bleak snowy landscape indicated by using the white of the paper. The grey winter sky would become a favorite theme in Edward Gorey's works, and in this image it is effectively painted in. The detailing on the image is remarkable. The image is 5.25" x 7.75" and the two figures having tea in the snow are very tiny on the original, yet they are rendered with precise details and shading. The gentlemen remain unexpectedly unmoved by the cold desolation of the countryside, and this is one instance where a fur coat appears to be needed.
Posted by ampootozote at 6:36 AM No comments:

The translation of any text from one language to another is fraught with perils, especially when the work is fiction, poetry or song lyrics. These styles of writing are often as much about the language itself as it is the meanings expressed. A particularly difficult task is translating nonsense verse.

The works of Edward Gorey are now available in many languages. Edward Gorey's Epiplectic Bicycles is an article by Alan Levinovitc following the perils and pitfalls of translating my favorite Gorey volume into Spanish, German, French, Japanese and Chinese.
Posted by ampootozote at 8:50 AM No comments:

Lilliput was a small format British monthly publication founded in 1937. I previously wrote about a piece of original artwork created by Edward Gorey as a cover image for this magazine (see my post from July 9, 2011). Edward Gorey created a total of three cover images for Lilliput magazine - all of these cover designs are presumably unpublished and were not used by the magazine. It is unclear if they were ever sent to the magazine itself or if Mr. Gorey created them as examples of his work or for exhibition.

All three Lilliput pieces were created somewhere around 1948/1950 and each is signed with Mr. Gorey's early form of initial signature, "EStJG" in block letters. Around 1950, he changed his initial signature to"EG", and would continue to use variations of the EG signature from that point forward. 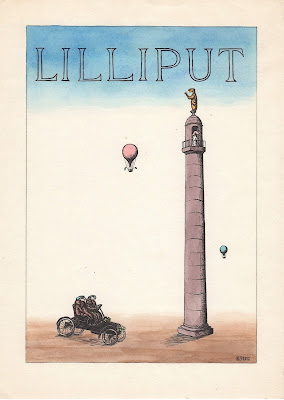 This Lilliput cover painting is significantly different from the one I featured in the earlier post. In the previous piece (shown at top), there is an enhanced boldness in the figures and coloration, due to the stained glass style of the art. 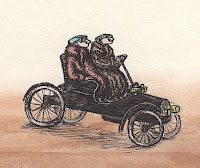 Today's piece of art is highly sophisticated with an exceptional use of white space in the composition of the image. A sense of depth is achieved solely by placing two passenger balloons floating in the sky. Without the balloons, the image would be a fairly one dimensional scene, but the scale of the balloons turns the image into a fantasy landscape.

As in the previous piece, Mr. Gorey's love of early automobiles is present. The two fur clad men in the car are contrasted with the toga clad man, whose costume mimics the statue which is perched atop the tower. Either the man in the tower would be very cold or the men in the car are overdressed for the weather!


Posted by ampootozote at 12:39 PM No comments: