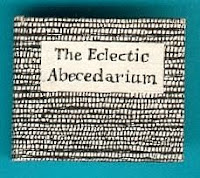 One of Edward Gorey's most sought after published works is The Eclectic Abecedarium. Published by Bromer Booksellers, Boston, MA in 1983 as a limited edition of 100 deluxe and 300 black and white signed/numbered copies, this miniature book - the volume is only 1 1/16" x 1 5/16" - is completely hand bound by a master book binder. The title of the book is put onto the cover with a pasted-on title label.

In November 2001, Bromer Booksellers issued an illustrated catalog containing 231 listings of Gorey collectibles offered for sale from Anne Bromer's personal collection. In the introduction written by Ms. Bromer, she relates how, after meeting Mr. Gorey at Gotham Book Mart she was able to engage him to write, draw, and design this book. According to her account, Mr. Gorey was most particular in terms of presentation and binding, but was less exact with the financial arrangements or the publication.

I am showing black and white copy #87 in the photo above. The black and white edition is supposed to be numbered from #101 - #400. I recently contacted Bromer Booksellers and they could not explain the numbering on this copy, so either Mr. Gorey made a mistake numbering the books (possibly he forgot to write the "1" of #187), or the binder made a mistake with the signature gathers. I would be interested to find out if anyone knows of a hand colored #87 from this edition. 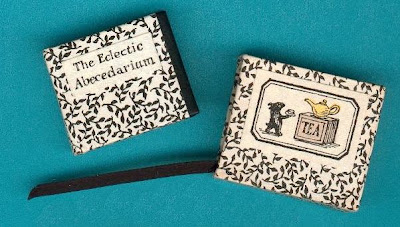 What makes this alphabet book even more unique is the 100 deluxe copies which feature an elaborate binding, and are hand colored and slipcased. As with other hand colored books by Edward Gorey, the detailing in the watercolor painting is amazing - especially since it is all done in miniature. This signed/numbered, hand colored book is bound in morocco-edged, decorated boards featuring trailing ivy. The boards of the slipcase match those on the book. The slipcase has a special pasted on label which has also been hand colored. A black ribbon was attached to the interior of the slipcase to facilitate removing the book. Of the 100 numbered, deluxe copies, 80 were offered for sale and the remaining copies were reserved for Mr. Gorey's personal use. The deluxe edition completely sold out upon publication. I am showing copy #35 in the above photo.

The Eclectic Abecedarium is included in 1983's Amphigorey Also, but the book loses much of its charm in this printing because the drawings (out of necessity) are stacked and printed on a couple pages. 1985 saw the the first trade printing of this title from Adama Books. Sized as a larger format hardcover (no dust jacket, see photo to the left), the drawings remain true to the original printing and float on each page. 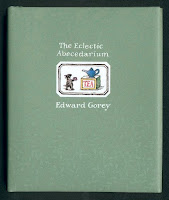 2008 brought a reprint from Pomegranate Books in hardcover with matching dust wrapper (right). In this reprint, each picture has been colorized by computer. Surprisingly, the colors added to the drawings in this book do not match Mr. Gorey's originally intended color schemes.
Posted by ampootozote at 6:00 AM No comments:

The Village of Gorey

My partner ran across an interesting geographical fact yesterday...On the Isle of Jersey is the village of Gorey. 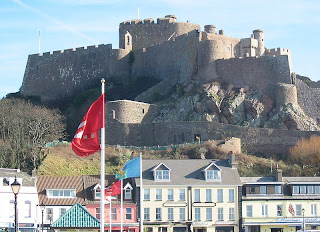 Because of its location as part of the Channel Islands, the Isle of Jersey has been claimed by both France and England over the past few hundred years, but now is "a separate possession of the Crown" and looks to England for its defenses. The unsettled nature of this island is the perfect setting for the picturesque village of Gorey (or Gouray when claimed by the French).

The village rests in a bay and was a major fortification for the British who erected the castle of Mont Orhueil in 1204. Every year in August, the village of Gorey holds it annual Fete de la Mer - a seafood festival.

I do not know Edward Gorey's ancestry, but it is possible that he inherited his surname from this village. It is intriguing to think that Mr. Gorey is named after a castled village that resides on an Isle that is not completely independent but is not really French or English. As fans of Mr. Gorey know, he was born is Chicago, Illinois, is often thought to be English, and he majored in French in college. Even the castle resembles the castle in the illustration for the back cover of The Secret of the Underground Room by John Bellairs.
Posted by ampootozote at 6:00 AM No comments: 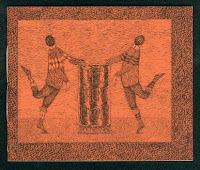 The Prune People is one of my least favorite of all of Edward Gorey's books. This wordless volume consists of drawings of people whose heads are large prunes. Literally faceless, the people in the drawings strike me as gimmicky rather than intriguing, and I was surprised to find that I have little interest in creating stories in my head based on the situations depicted. This was obviously not the case for Mr. Gorey since he published a second volume with these same characters. 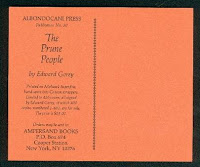 Published in printed wrappers in 1983 by the Albondocani Press, The Prune People was issued in an signed limited edition of 400 numbered and 26 lettered (A to Z) copies. I have copies #J/26 & #361/400. To the left is the back of the announcement card for this title - the front of the card shows the illustration from the cover of the book. Interestingly, this book is included in the anthology Amphigorey Also which also was published in 1983. 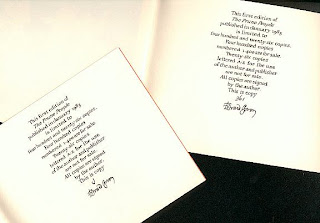 Posted by ampootozote at 6:26 AM No comments:

John Bellairs' The Mummy, The Will, and the Crypt

We left off exploring the Edward Gorey illustrated mystery stories by John Belliars at 1983 with the publication of The Curse of the Blue Figurine (see my post from May 24, 2009). As mentioned in that posting, this title marked permanent return of Edward Gorey as the illustrator for the series from 1983 to 2000.

Published in 1983 by Dial Books for Young Readers, The Mummy, The Will, and the Crypt once again features young Johnny Dixon and the ever cranky Professor Childermass. The flap copy on the dust jacket refers to this tale as a sequel to the previous book, but it is really just the return of these characters. 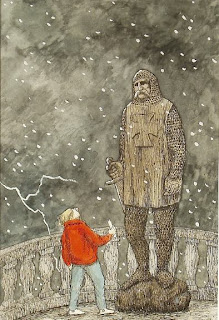 I own the original watercolor artwork for the cover portion of the dust jacket. This watercolor is very painterly with its stormy night sky, and I really like the use of opaque watercolor for the snow and lightning. The touch of red in Johnny's jacket plays nicely against Mr. Gorey's "mushroom colors" in the rest of the painting. I am using a portion of this image as the header for my blog.

I purchased the cover art in 1994 from Gotham Book Mart. At that time, Mr. Gorey decided that he could no longer put off major repairs to his home, and to finance the work, he authorized GBM to offer the original pieces of art from the Bellairs series (as well as many other illustrations from his archives). I should note that not all the art from this series was found in the archive at this time. There were several titles from which the artwork could not be located. In one example of this, I was told I would receive the artwork for the hand lettered title of the book as part of the sale price, but it was never found. 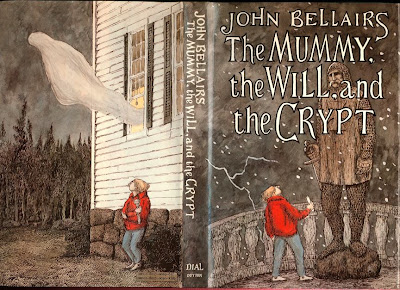 The director of the Gotham Book Mart gallery, P. Matthew Monahan had died rather unexpectedly and in late 1994 GBM was still reeling from the effects of this unfortunate happening. It should be noted that everything (record keeping, sales slips, cataloging) at GBM was done completely by hand and even more so by memory - a huge reason why the loss of Mr. Monahan was so devastating to the store.

After a short search for a suitable replacement for Mr. Monahan, Andreas Brown hired Gina Guy. Ms. Guy was fast becoming the "go to girl for all things Gorey" at GBM, but there were still several people involved with sales of Gorey items as Gina was became more familiar with the stock (and the collectors).

Now to the art: Because each piece of Bellairs dust jacket artwork was significantly larger and more expensive than the other pieces of art being offered, someone at GBM asked Mr. Gorey if he wanted the DJ art sold as intact single pieces or cut and sold as front and back cover illustrations. According to Gina, Mr. Gorey responded that he really didn't care if the art was cut if someone wanted a portion rather than the entire piece.

Therefore, when Gina offered the cover art to me from The Mummy, The Will, and the Crypt, it was presented as:
1) Front & Back Dust Jacket Art
2) Front Cover Art Only
3) Rear Cover Art Only

Because of how it was offered to me over the phone, I was under the impression that the art was created in two pieces, so I ordered just the front cover art. After I received the art and realized that it had been trimmed (I could tell by the unpainted margins on the paper), I called Gina and was told that they cut the back half off and sold me the front portion.

To my knowledge, three Bellairs titles were cut and sold in pieces: The Mummy, the Will, and the Crypt; The Mansion in the Mist; and The Lamp from the Warlock's Tomb. Fortunately, the practice of cutting the art up was quickly ended, and future sales were for the full dust jacket design only.
Posted by ampootozote at 11:09 AM 4 comments:

Edward Gorey surrounded himself with stuffed animals, plush toys (in various states of disintegration), and was especially fond of Teddy Bears. Looking at the photographs of his home in Kevin McDermott's book Elephant House, you will see many bears residing in the house.

What do most Teddy Bear lovers do with their bears? They dress them up! E.D. Ward, A Mercurial Bear is Mr. Gorey's Teddy Bear dress-up book. Published in 1983 by The Gotham Book Mart, E.D. Ward is a paper doll book in which the participant can hand color the bear and it's clothes, then cut them out, dress the bear, and dance and play with their costumed friend.

This book was either published in a large quantity, or was a lackluster seller (or both) because it was available for many years from GBM at the publication price. The copy I am showing has been signed by Mr. Gorey.
Posted by ampootozote at 6:15 AM No comments:

I will be back at posting shortly...I had a computer meltdown over the holidays that seems to be behind me now. New posts coming soon!
Posted by ampootozote at 6:57 PM No comments: