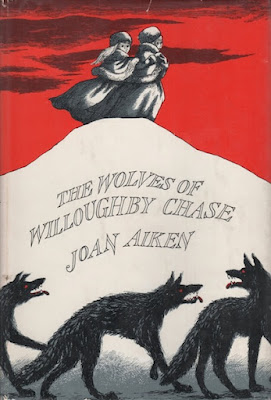 Joan Aiken (1924 - 2004) was an amazingly prolific author of books, plays, poems, and alternative history novels. One of her most popular book series is the Wolves Chronicles. The Chronicles consist of twelve novels that feature child protagonists. Dido Twite is the heroine in most of the books, and her ingenuity and resourcefulness take her from one adventure to another.

The Wolves Chronicles can be a confusing muddle when first encountered for several reasons. The twelve books were written over the course of 23 years and, like The Chronicles of Narnia by C.S. Lewis, the stories were not written or published in the order in which they are finally intended to be read, although some readers prefer to read them in the published order. 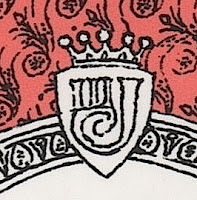 Within the series, British historical events have been distorted and changed to suit the author's imagination. In Ms. Aiken's 1800's England, the line of succession in Great Britain now rests with James III, not Queen Victoria because James II was not dethroned in the Glorious Revolution of 1688. In addition to this political hocus pocus, the actual geography of England has been altered to suit the stories. Once a reader is aware of these eccentricities, the series becomes much less confusing.

There are multiple English and American hardcover and paperback editions of the stories, and each new printing seems to have different cover designs created by various artists! From a bibliographical standpoint, this series rivals Mr. Gorey's own books for the confusion faced by a collector who wishes to collect a complete set of the Chronicles in all of their variant covers.

Edward Gorey created cover designs for eight of the twelve American editions in the series (some paperback, some hardcover, some both). In fact, Mr. Gorey created a total of thirteen cover designs for eight titles. At the time of his death, he was still working on his own newly redesigned covers for reprints, which was intended to give the books a uniform look. The redesigned artwork is unusual in that a wallpaper background with two round vignettes was drawn by hand, and floating figures relating to each story were placed on top of the background. Each title also has a different scene dropped into the lower vignette. The wallpaper and framing devices for the vignettes were changed after three titles. The Wolves of Willoughby Chase does not seem to have been given this new style of cover design. 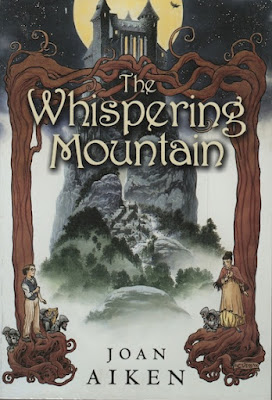 The Whispering Mountain (1968) - And so the confusion begins. Most lists, including the list on the Joan Aiken website, start the series with The Wolves of Willoughby Chase. The Whispering Mountain usually appears - if it appears at all - as book twelve in the series, but it is intended to be a prequel to to the series, so it can be read first or last! No Gorey designed cover appears to exist for this book. 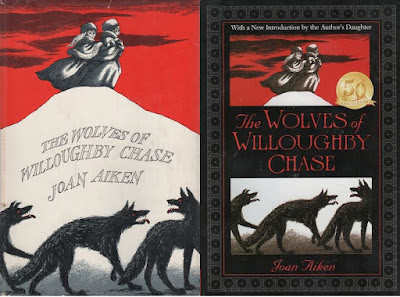 The Wolves of Willoughby Chase (1962) - The first edition hard cover of The Wolves of Willoughby Chase is a highly desired collectible for both Aiken and Gorey collectors, and this volume commands a premium price. The dust jacket design for the original hard cover (on the left) is a classic Gorey cover, conveying the menace and flavor of the story in a deceptively simple illustration. The original artwork was reused for a paperback reprinted version (right), but by masking the image, much of  the drama of the original layout has been lost. 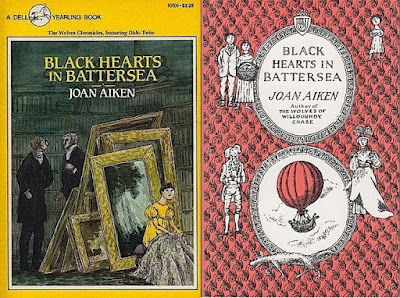 Black Hearts at Battersea (1964) - The original American paperback version (above left) has a cover design by Edward Gorey that sets up a format that will be used for much of the series. The framing of the artwork is a disappointment, since the addition of the yellow border minimizes the impact of the art by making the image appear cramped. The female figure's yellow dress has become an afterthought instead of a focal point. Mr. Gorey's redesigned wallpaper style cover is on the right. 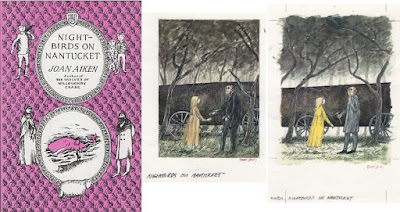 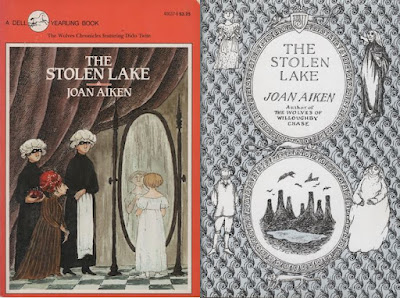 The Stolen Lake (1981) - The original Edward Gorey paperback is on the left, and his redesigned cover on the right. 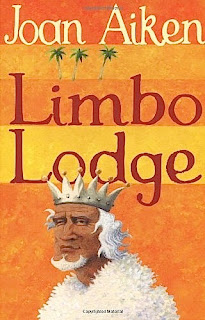 Limbo Lodge (1999) - Due (no doubt) to the lateness of this publication, no cover by Gorey appears to exist.

The Cuckoo Tree (1971) - The original Edward Gorey cover on the left, the redesigned cover in the center, and the original artwork on the right. 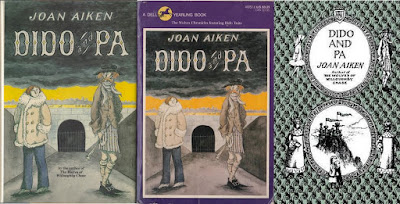 Dido and Pa (1986) - The original Edward Gorey hardback on the left, the paperback is in the center, and the redesigned cover on the right. I have records showing the original painting for this cover was sold in 2003 in an online auction. 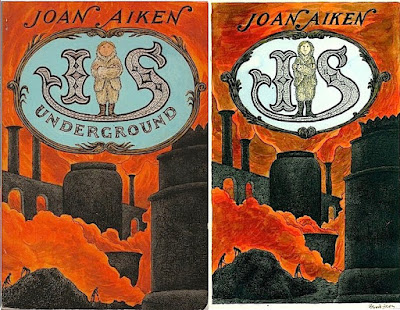 Is Underground (1992) - The hardback dust wrapper by Edward Gorey (shown on the left) is the most striking cover produced for the series. The impression that one has entered Hell is simply and effectively executed through the use of perspective and intense color. In 1997, Mr. Gorey pulled out his flaming orange paints once again for the back cover of The Bell, The Book, and The Spellbinder by Brad Strickland. An earlier version of the original artwork for this title is shown on the right. This book was titled IS in England and the title was changed for the American edition. The original art shown on the right appears to be a fully finished version, not a sketch, meaning that Mr. Gorey completely recreated the art when the title was changed. This is somewhat surprising since the escutcheon with the revised title could have easily been redrawn and added over the old title - a technique used often by the artist. For the final published version, Mr. Gorey's painting technique on the fiery orange clouds is more carefully blended and less visceral than in the first attempt. 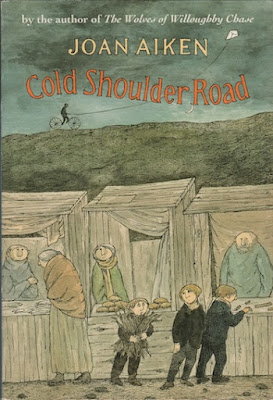 Cold Shoulder Road (1995) - Edward Gorey employed his famous "mushroom colors" for the American hardcover and paperback versions of this title. This title and Is Underground finally dispensed with the irritating colored border that usually appears on the paperback versions, and both paperback and hardcover copies show the full image without distraction. 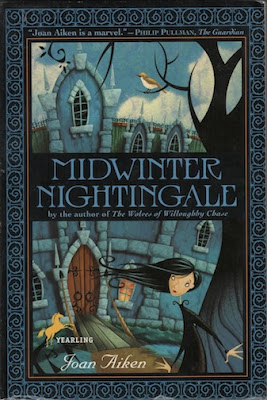 Midwinter Nightingale (2003) - This title was published after 2000, so no cover by Edward Gorey exists. 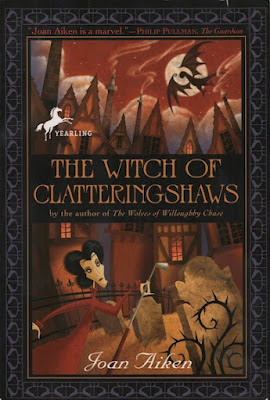 The Witch of Clatteringshaws (2005) - This title was published after 2000, so no cover by Edward Gorey exists.

This is a nice article about the current show at the Edward Gorey House that includes some wonderful photos with cameo appearances by Director Rick Jones and Curator Gregory Hischak.

Here is a second article on the exhibition:

Posted by ampootozote at 7:03 AM No comments: 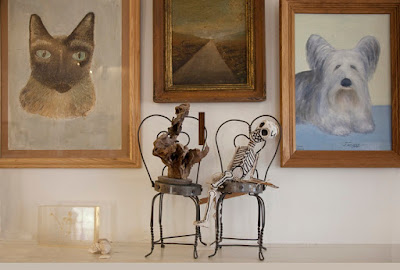 On Saturday April 15th the Edward Gorey House will open their 2017 exhibition, Edward Gorey's Cabinet of Curiosities. The annual exhibitions at The House are always unique experiences that focus on different aspects of the works and life of writer/artist/illustrator Edward Gorey. With an emphasis on the collecting passions and unusual collections favored by Mr. Gorey, the 2017 exhibit promises to be the most personal show put together by The House.
The moniker Wunderkammer, or Cabinet of Curiosities stems from the practice, started by European nobles in the 15th Century of forming and displaying eclectic collections in large wardrobe-like cabinets or rooms that could be locked for safe keeping and opened to display the wonders within. The curiosities were usually be an eclectic mix of objects that would reflect the interests and tastes of the master of the house. Anything was fair game to be included, and the owner took pride in the acquisition and display of the objects within. 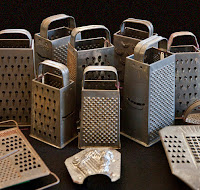 Edward Gorey's entire home could easily have been classified a Wunderkammer. Rare pieces were displayed next to yard sale finds, rocks that looked like frogs stood sentry on the porch, while cheese graters and pepper mills were arranged to resemble armies or towns. All the objects collected by Mr. Gorey inspired and informed his work, and many direct (and obscure) parallels can be seen in the objects he lived with and his artwork.

To find out more about Edward Gorey's Cabinet of Curiosities and to plan you visit to The Edward Gorey House, go to www.edwardgoreyhouse.org.

Posted by ampootozote at 9:28 PM No comments: