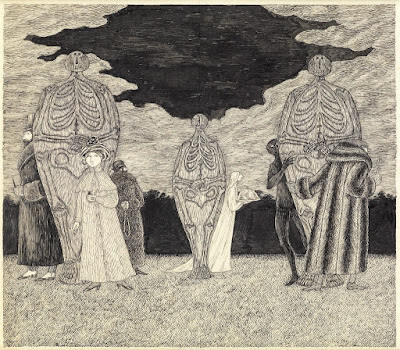 On March 21, 2017 Swann Auction Galleries in New York City held its semi-annual Illustration Art auction. Showcased at the center of the auction was a selection of twelve pieces of original artwork (in eleven lots) by Edward Gorey. The artwork offered included published and previously unseen pieces by Mr. Gorey.

The original paintings and pen & ink drawings at this auction ran the gamut from early book cover designs created by Edward Gorey in the 1950's, to later theatrical set and costume designs. Of particular interest was a color portrait of Mr. Earbrass that sold for $11,875.00, which was double the pre-sale estimate. With a final price of $18,750.00, the stunning Mystery! themed piece appears to have set a new auction record for a piece of original artwork by Mr. Gorey.

Swann has become the go-to auction house for works by Edward Gorey. Since January 2013, they have offered hundreds of books, posters, and more than 55 original works (drawings, paintings, and fine art prints) by Mr. Gorey. 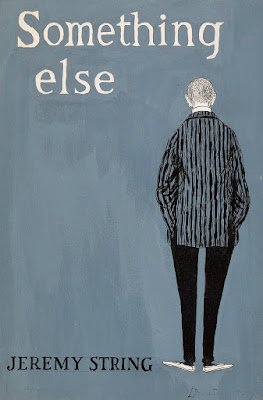 Posted by ampootozote at 5:10 PM No comments:

At Home With Monsters 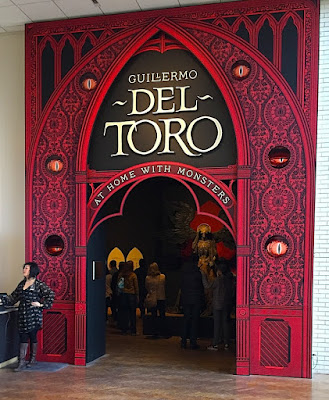 The Minneapolis Institute of Art is currently hosting Guillermo Del Toro, At Home With Monsters , an exhibition which is on display through May 28th before heading to Canada. The exhibition displays Mr. Del Toro's collections of paintings and original illustration artwork alongside his very unusual home furnishings, artifacts, and film concept artwork. The entrance to the exhibition itself lets you know that this will not be a typical museum show.

Mr. Del Toro has has christened his Los Angeles home Bleak House and filled it with inspirational material and artwork. Among the art on display in the exhibition are several pieces of original artwork that Edward Gorey created for Penny Candy by Edward Fenton. The suite of four small drawings for the book are particularly entrancing. The amount of detail in these petite pieces is quite astounding. 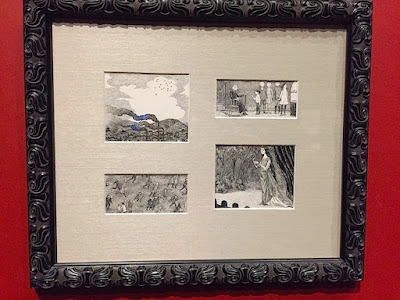 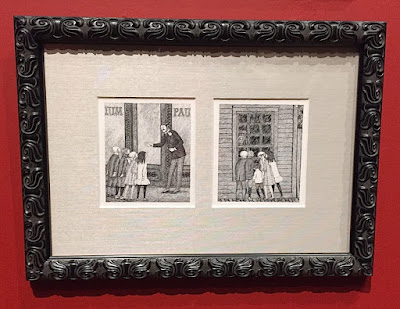 In 2016, before the home was pillaged for the exhibition, Conan O'Brien sent Andy Richter off to film a tour of Bleak House guided by Guillermo Del Toro himself. The video focuses on the life sized figures (many of which are in the exhibition), but you get glimpses of the treasure trove of original art in the director's home. Those with quick eyes will spy part of one of the Gorey's shown above to the right of one of the life sized characters from Freaks.

Posted by ampootozote at 12:16 PM No comments: 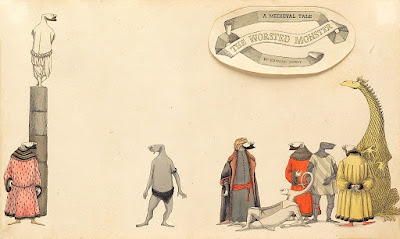 Swann Auction Galleries continues its tradition of semiannual Illustration Art auctions with the upcoming March 21 sale. Over the past several years, the Swann auctions have become the place to find rare and unusual original artwork by Edward Gorey. 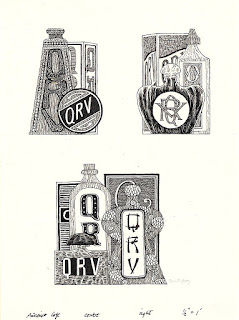 This auction features eleven lots which include six book cover/dust wrapper designs as well as original artwork from Mr. Gorey's theatrical work. The works being offered span the decades from early 1950's works to mid career pieces from the 1970's and into the 1980's.

For more information on the auction go to www.swanngalleries.com

Posted by ampootozote at 7:06 PM No comments: