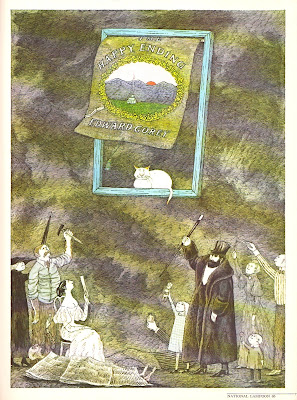 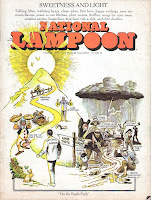 The Happy Ending by Edward Gorey is a fanciful collection of captioned images which was published in the March 1973 issue of National Lampoon Magazine. The cover of the magazine (not by Mr. Gorey) shows the path to Good Taste (clowns and a barrel of monkeys) and to Bad Taste (cutting remarks and uncalled-for smut), so the pieces fit right in with the rest of the magazine!

The Happy Ending appears near the back of the magazine and has a wonderful "cover" image done in full color and twelve individual spot illustrations collected onto four pages. Often, Mr. Gorey would create more images than appear in magazine spots and it would be fun to know if there are more images associated with this title. Two of the pieces included in this work stand out for having a distinctly gay theme. Many of Mr. Gorey's magazine pieces would later be turned into books and it is a shame that this one never was.

The twelve spots are executed in two distinct styles - six are drawn in pen & ink and feature crosshatching while the remaining half dozen are painted using watercolors. I am also curious as to whether the watercolor pieces are executed in color or are in grey tones. My guess would be that, like the images created for The Broken Spoke in 1976, at least some of the paintings are probably done in color but the magazine printed them in black & white.

The Edward Gorey House asks Anne Bromer, owner of Bromer Booksellers in Boston, to share some thoughts and reminiscences about working with Edward Gorey.
http://www.edwardgoreyhouse.org/blog/friend-edward-gorey-anne-bromer

Posted by ampootozote at 6:52 AM No comments:

It is mid-summer and if you are feeling a little anxious because you have not had added anything new to your Edward Gorey collection for a while, The Edward Gorey House is there to help you! Just released are two New Prints that are sure to delight every Gorey enthusiast... 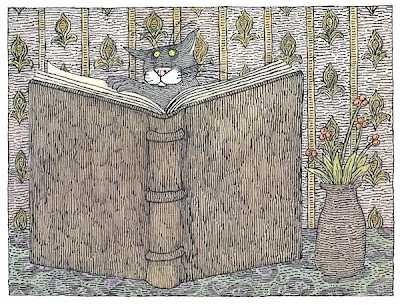 The first print is Antiquarian Cat Reading. The image was originally created by Mr. Gorey for the 1994 Boston Book Fair and appeared on the poster. This wonderful image shows one of Mr. Gorey's signature cats doing what cats do best - confusing us by their actions! The image measures 6 9/16" x 8.5" (paper size is 9.5" x 11.5") and appears in full color.

The second print is a double header - the front and back cover for an unpublished book titled The Awful Warning. The image measures 4" x 11 5/8" (paper size is 11" x 17"). This is a fantastic double image in Mr. Gorey's distinctive black and white crosshatched drawing style.

The Unrest Cure by Saki 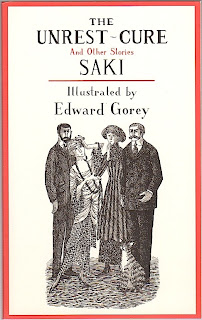 The Unrest Cure And Other Stories by the English writer H. H. Munro (pen name Saki) with illustrations by Edward Gorey has just been issued (or re-issued depending on your point of view) by The New York Review of Books. Mr. Munro (1870 - 1916) was a British writer and playwright who wrote short stories that satirized upper class Edwardian society. His works first appeared in newspapers and then were published as collected stories.

This is the fourth time these stories have been published with the 1964 Edward Gorey illustrations. Mr. Gorey created the artwork for a German language edition titled Die Offene Tur published by Diogenes. The publisher will re-issue these stories in paperback several times over the next 30 years (I am not showing the German language paperback re-issues, and am combining all of these reprints together as the second time the illustrations appear in print).

I have one piece of original artwork from these stories which is reproduced in both the 1964 and the new 2013 volumes. The story it illustrates is The Hounds of Fate. This small piece of original art has a lot of atmosphere and evokes a mood of gloom. Because I do not read German, I was previously unable to read The Hounds of Fate. Like the drawing, the story is moody and dark. With its enigmatic protagonist and air of impending doom, the story reminded me forcibly of the old television program "Alfred Hitchcock Presents". The artwork is signed by Edward Gorey at the lower right.

In the original German edition (on the left in the photo above), the image in the book is printed the same size as the original artwork (center). In the new edition (on the right), all of the art is printed larger than before and the illustrations suffer a bit from both enlargement and from being reprinted from a previous printing. The line quality is ragged and all subtlety gone from the images. It is, however, nice to finally have an English language version including all of the stories with the Gorey illustrations.
Posted by ampootozote at 6:17 PM 2 comments: 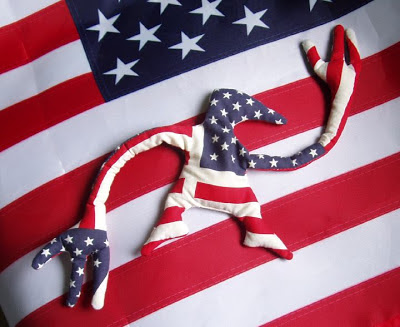 Patriotic Figbash does his annual Happy 4th of July dance!
Posted by ampootozote at 6:23 AM No comments: