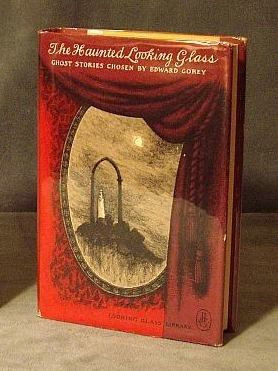 This week's selection of scary stories which should be re-read is 1959's The Haunted Looking Glass. This is a collection of short horror stories from a variety of authors, each chosen by Edward Gorey when he was an editor at The Looking Glass Library. In addition to choosing the stories to be included, Mr. Gorey illustrated each tale with a book cover style design which appears before every story.

The spooky tales contained in this collection are often told in a first person narrative style and end with a chilling plot twist. The collection reflects Edward Gorey's omnivorous reading habits, and includes famous authors as well as stories by less well known writers. I own the original artwork from two of my favorite tales included in the book.

The Body Snatcher by Robert Lewis Stevenson is a tainted tale associated with early medical research. Mr. Gorey's expert use of line work creates just the right mood through his mastery of light and shadow. I particularly like the composition of this piece with the hanging skeleton presiding over the evil proceedings. At this point in the story, a decision hangs in the balance that will haunt the participants forever.

The Monkey's Paw by W.W. Jacobs is a cautionary tale, encouraging the reader to be careful what you wish for, because it just might be what you get. Using only pen and ink on white paper, the variety in the line work on this beautiful illustration provides a tense, moody backdrop for the scene. The theatrical effect of the shriveled monkey's paw on the table is accentuated by the glow on the faces and the darkening of the chairs around the circle of onlookers. This subtle use of light and shadow makes the tiny dreaded object the center of attention. This is my favorite illustration in the book.

In later interviews, Mr. Gorey stated that The Haunted Looking Glass was a particularly difficult project because he did not want to give away the plot with his illustrations. This, of course, is the challenge for all great illustrators - to enhance and embrace the writing, luring the reader into the story, but not spoiling the experience for the reader by telling too much.


Posted by ampootozote at 5:51 PM No comments: 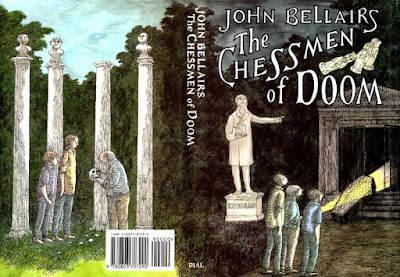 As October approaches and the leaves begin to change color, I always get in the mood to read a scary book or two. My go-to series at this time of year is the Edward Gorey illuminated John Bellairs series. I have begun the fall line-up with one of my favorites, The Chessman of Doom. 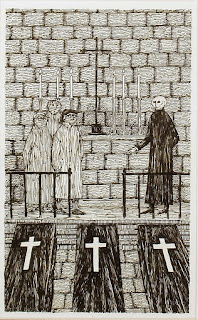 This story has all the elements of a great Bellairs' tale, with Johnny, Fergie, and cranky Professor Childermass trying to outwit an evil sorcerer who is intent on destroying the world. This title also has my favorite frontis illustration from the series created by Edward Gorey. Menacing and creepy, our intrepid trio is confronted by a skull-headed man in a cassock who shows them three coffins, which are intended to be occupied by the visitors.

Just as watching the movie Mary Poppins always results in the making of gingerbread, a side effect of reading any of John Bellairs stories is that they force you to make gooey chocolate cakes!

The world of Edward Gorey lost a friend this past week. Daniel Levans, a talented dancer, performer, teacher and director has passed away. Mr. Levans directed and choreographed Amphigorey at the Perry Street Theater in 1994 and Off Broadway's The Gorey Details in 2000.
Posted by ampootozote at 7:36 AM No comments:

In a 1980 Boston Magazine interview, Edward Gorey was asked by Lisa Solod, "Are you interested in politics?" Mr. Gorey stated that he was not, and, after voting once back in 1952 he did not register to vote again when he moved to New York City the following year.

While it is true that in conversations and interviews Edward Gorey held observations and had comments on virtually every subject, he rarely tackled political subject matter in his artwork. It is unusual therefore to find an illustration by Mr. Gorey for a politically themed article. 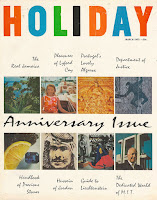 The March 1963 issue of Holiday Magazine contains a wonderful full page illustration by Edward Gorey for the article The Department of Justice. The article, written by Tristam Coffin, is the ninth in a series published in the magazine. In 1963, Robert F. Kennedy was the Attorney General, and the article illuminates the functions and responsibilities of the department he headed.

Mr. Gorey has provided a teaser illustration for the title page of the article showing angels and demons surrounding the departmental logo. One member of each pair is alternately pleased and distressed to be linked to the department.

The full page illustration is a masterwork in grey tones. Perched atop a towering stack of Federal Statutes, Blind Justice is crowned by the department's motto, Qui pro domina justitia sequitur (according to the article, this means "Who prosecutes on behalf of justice."). The detailed illustration illuminates many departmental responsibilities and concerns discussed in the article, each given a humorous twist through the insight of Mr. Gorey. Of particular note is the large robot in the lower left hand corner who is being thwarted by a departmental representative, and the  "highly irregular deportation procedures" in the upper right corner. 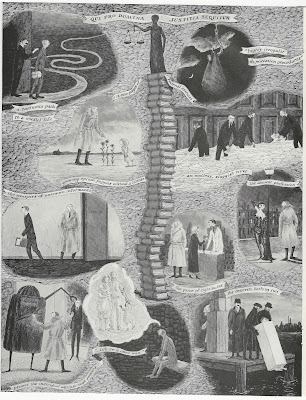 This illustration is particularly well printed in the magazine. The quality of the reproduction shows all of Mr. Gorey's subtle watercolor effects and exacting line work in fine detail. Holiday was a large format publication, and assuming this piece was drawn life size for the magazine, this is an very large piece of art at 10 3/8" x 13.5". 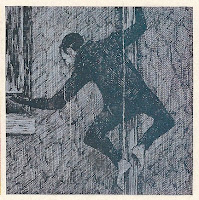 9/15/15 - A viewer of this blog has informed me that this image appears on an Edward Gorey House print entitled Cycle of Crime. According to the EGH, the print was made from a previously unpublished piece of artwork. The central angels and devils also appear on the print.