The Doom of the Haunted Opera 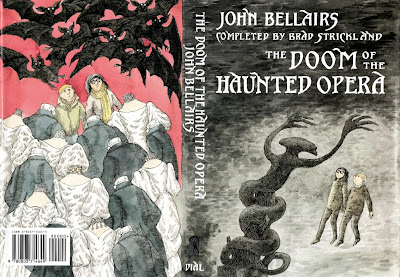 The Doom of the Haunted Opera was the fourth book left unfinished by John Bellairs at the time of his death. Author Brad Strickland worked from the notes left behind to create a spooky story which features an abandoned Opera House where a sinister piece of music, The Day of Doom will make its debut, despite a ghostly warning not to play it. Once the music is played, the dead will be awakened and the composer's evil grandson will become King of the Dead! 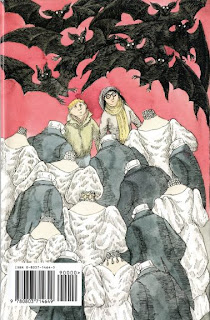 The book was published in 1995 by Dial Books for Young Readers and features a wrap around dust jacket design and frontis illustration by Edward Gorey. The back cover of the dust jacket is particularly colorful. Using a dream sequence for inspiration (don't most dreams play out in black and white?), Lewis and Rose Rita are shown being set upon by headless opera goers and bats! One of my favorite characters in this book is a cat that whistles - a feline that Edward Gorey would certainly have taken a liking to.

When this book was published, I was offered the three pieces of original artwork by Mr. Gorey. Unfortunately, at this time the prices for Mr. Gorey's art were jumping significantly - in fact the price for this art was double what earlier art from the series had been priced at just two years previously - so I could not add this art to my collection. I do still have the full size xeroxes sent to me by Gotham Book Mart, which I am showing to the right.
Posted by ampootozote at 7:04 AM No comments: 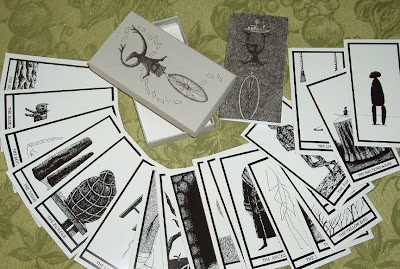 Published by The Gotham Book Mart in 1995, The Fantod Pack by Edward Gorey is a boxed card set of 20 fortune telling cards. The illustrated grey box includes cards and a booklet which guides the "reader" to tell their (mis)fortune.

This extremely popular Gorey item was first available in a signed, limited edition of 26 lettered (A to Z) and 750 numbered sets. The signed limitation page appears within the booklet. I have copies I/26, and #77/750. The limited edition sold so well that GBM promptly issued an unsigned second printing. The Fantod Pack is once again in print today and available from Pomegranate Publications.

In the two photos below I am showing the front and back of the announcement card for this publication. The 4.125" x 6.25" card is larger than the 2.75" x 5" box, so the image of Figbash on a unicycle has been enlarged to fit.

Edward Gorey's signature appears in the lower right hand corner of the card but not on the box lid.

I think the popularity of this Gorey creation is that it is, in a sense, a card game. The participant is encouraged to throw the cards in the air and interpret them using the gloomy and often humorous card descriptions.

With The Fantod Pack, Edward Gorey once again has recycled an earlier project. The cards were originally published in Esquire Magazine (December 1966) as The Awful Vista of the Year: The Fantod Pack. Around 1969, The Owl Press of California created an unlicensed version, which was copied from the magazine images and printed on fluorescent green stock.
Posted by ampootozote at 6:00 AM 3 comments: 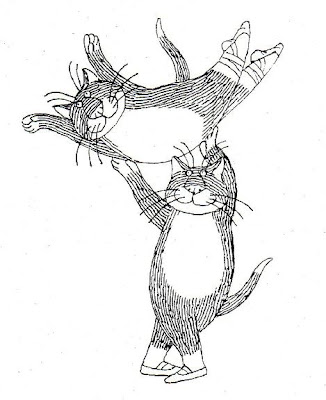 It can be said that when one thinks of Edward Gorey, one usually thinks of cats. Smiling, mischievous, playful, up to something (or nothing at all) - cats. In 2004, I obtained a wonderful piece of original art by Mr. Gorey showing a pair of cats in ballet shoes performing a Pas de Deux. The ballerina cat is being held aloft by the danseur noble as they effortlessly execute their dance.

This drawing came from the estate of Rosalie Lewis, who was the former head of the New York City Ballet gift shop and merchandise development. This image was used by the ballet for a tee-shirt design entitled "New York Kitty Ballet". Was there an actual Kitty Ballet? Who can say?! 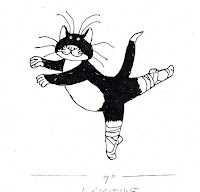 At the time this piece was offered to me by Gotham Book Mart, two other pieces from Ms. Lewis' estate were also offered. I was sent xerox copies of the artwork for my inspection, and I show them here. The second piece shows a single ballerina cat "en pointe". Notes from GBM stated that the image was drawn on tracing paper which had been mounted to heavy art stock.

The third image from this set is a spectacular ballet totem consisting of three pairs of dancers in a gravity defying performance. All three pen and ink drawings have hand written notations for enlargement (not in Mr. Gorey's handwriting).
Posted by ampootozote at 11:20 AM 6 comments: 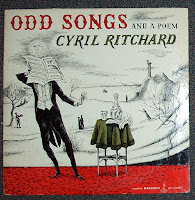 Edward Gorey created illustrations for books, posters, theatrical productions and even record jackets. His earliest example of record jacket art is Odd Songs and a Poem by Cyril Ritchard. This wonderfully wacky album cover was published in 1954 by Dolphin Records and has full front and back cover illustrations by Mr. Gorey. I was given a lovely copy of this album for my birthday last month! 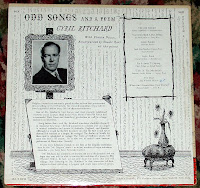 Cyril Ritchard (1897 - 1977) was an Australian actor and performer who is best remembered for his role as Captain Hook in the 1954 Broadway production of Peter Pan co-starring Mary Martin. His Tony Award winning performance was repeated on television in 1954 (with Ms. Martin). Another wild and woolly television performance from 1965 can be seen (in part) below, when Mr. Ritchard starred as the Wolf (in Grandma's clothing) alongside Liza Minnelli as an improbable Red Riding Hood.